10 Reasons Goshen is Indiana’s “Community of the Year”

This fall, Goshen was named Indiana’s 2017 Community of the Year. The award is given by the Indiana Chamber to a city that is a stand-out leader in development, economy, education, and culture. Past recipients have included longtime Hoosier cultural centers like Carmel (2015), Bloomington (2014), and Indianapolis (2012).

This honor is no small thing –– we are both humbled and excited for the future of our up-and-coming city. But when it comes down to it, the award is a recognition of something many Goshenites have always known: Goshen is a wonderful place to work, live, study, visit, and play.

But why were we named Indiana’s Community of the Year this year out of any other? Read the list to find out!

This was especially true during the most recent recession. In the depths of the downturn, Elkhart County’s jobless rate was around 20 percent. To say we’ve recovered is an understatement.

Due to new development projects, community involvement, a willingness to work together, and high work standards, we’ve rebuilt our economy from the ground up. The latest statistics put our unemployment at 3 percent. 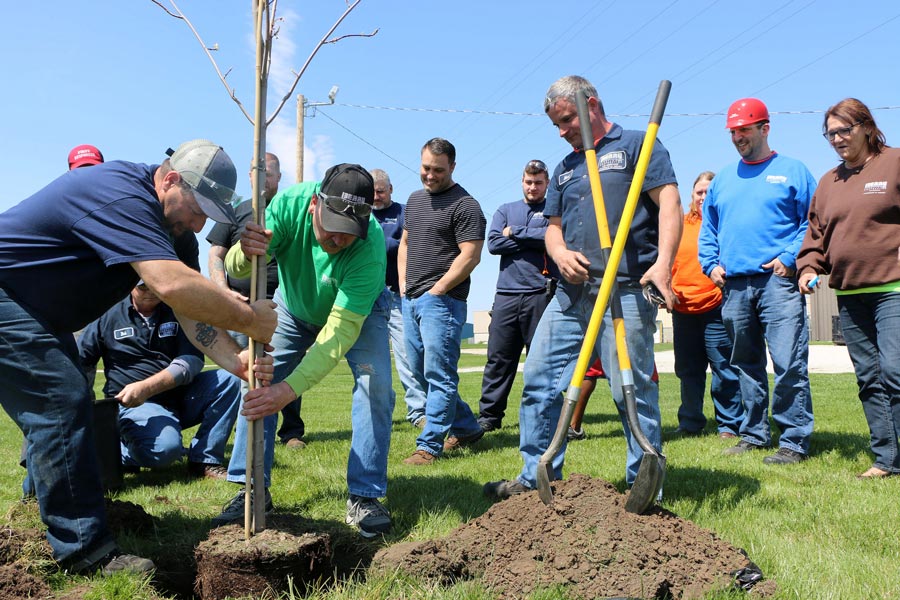 We get to work 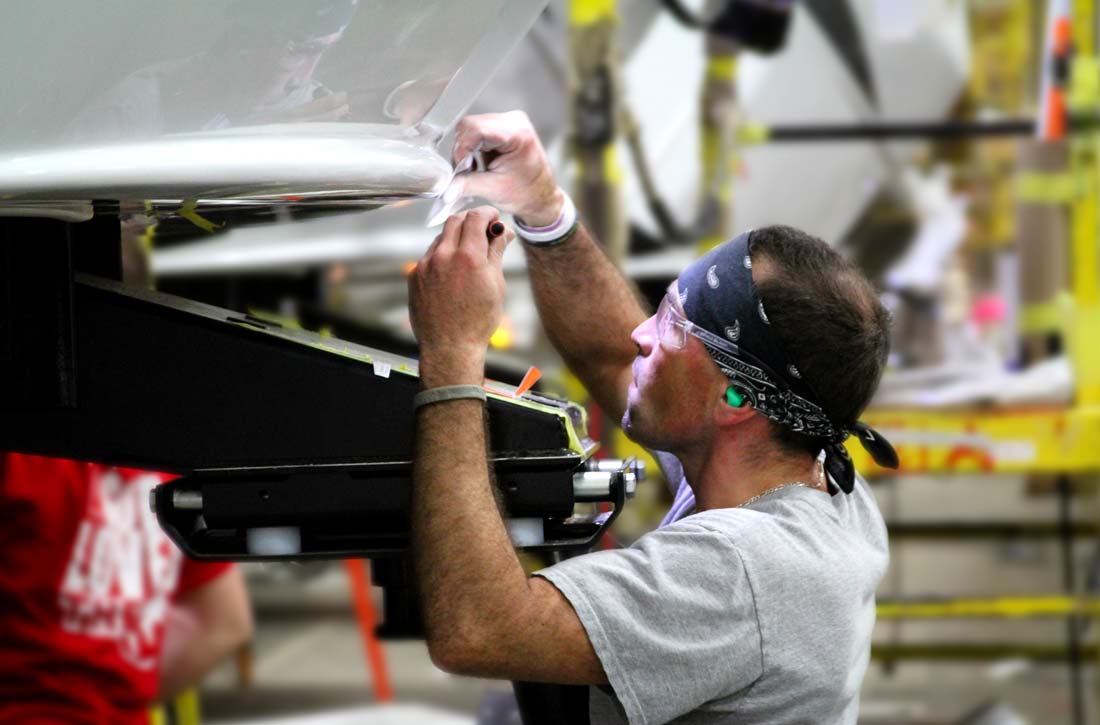 Fun fact: Elkhart County workers build one of every two recreational vehicles on the market. What’s behind this booming business? A skilled, motivated workforce — and employers don’t take it for granted.

Lippert Components, Inc., a local manufacturer, is built on the belief that “everyone matters.” No matter your status or pay grade, Lippert employees have every opportunity to “move up.” They also offer incentives for their employees to get involved in the community through philanthropic work and volunteering.

We lead in education

Goshen schools are known around the region for its innovation and leadership. Here are a few quick examples: Goshen Community Schools invites high school students to get prepped for college with their International Baccalaureate program. They also offer a project-based learning curriculum called New Tech that allows students to take a more hands-on approach to education. We didn’t even mention the extra-curricular activities, skill-based classes, and awe-inspiring staff and teachers! 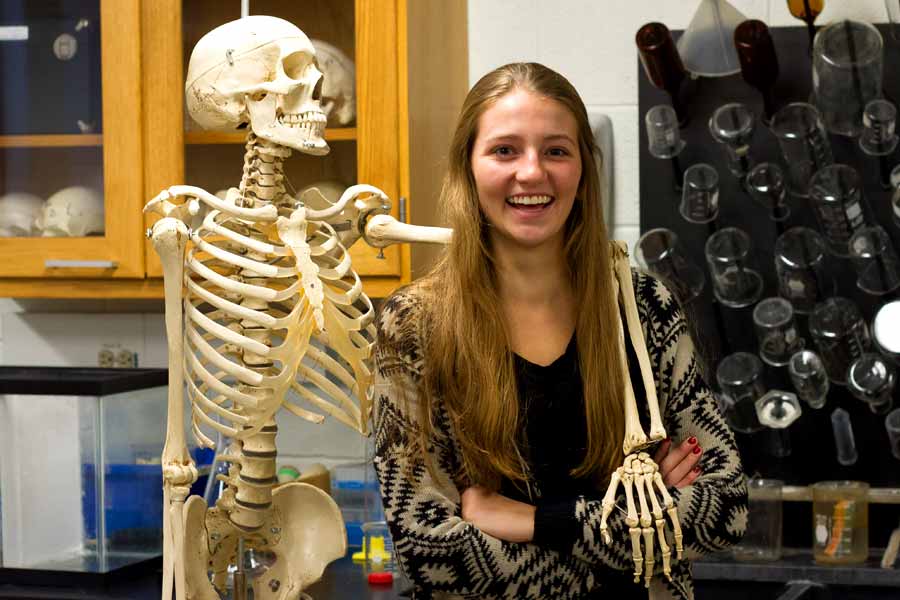 We make the old new again 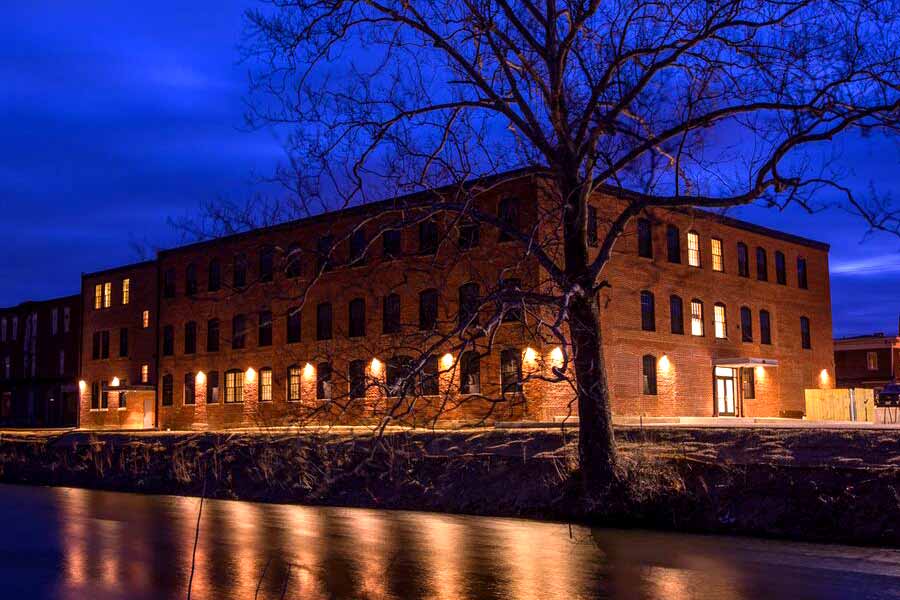 Goshen is lucky enough to have leaders that see the potential in old spaces.

Through “brownfield development,” Goshen has transformed dozens of dilapidated areas into vibrant cultural centers. One example is The Hawks building, located on the north end of the Millrace Canal. Once a furniture factory, The Hawks is now converted into live-work studio apartments for artists and entrepreneurs. Other developments include an upcoming co-housing neighborhood, local brewery Goshen Brewing Co., The Millrace Powerhouse event center, and public parks like Allan J. Kauffman Park, and Fidler Pond.

We’re the place to be

Goshen is a hub for entertainment.

Want to get in the know about upcoming local events? Subscribe to our events calendar! 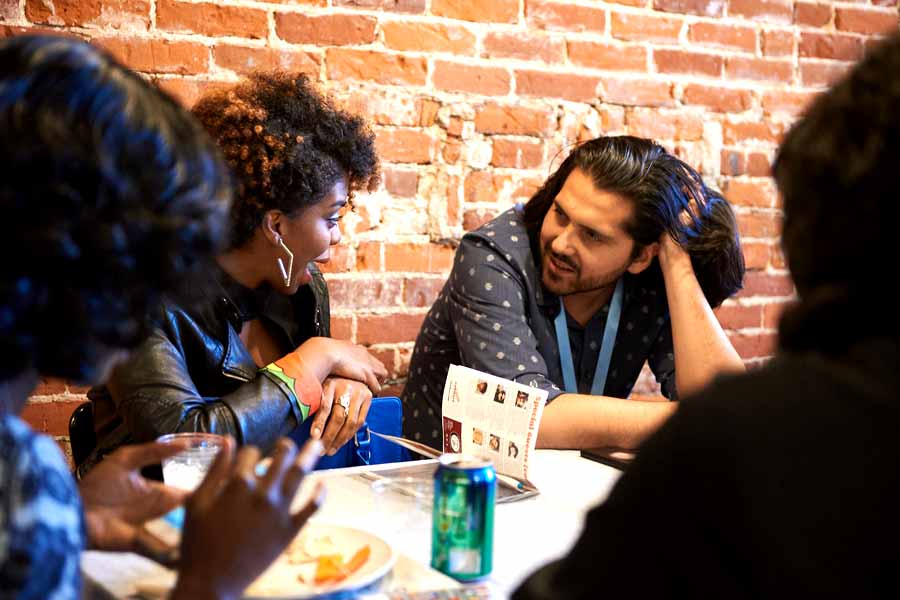 We value what makes us different 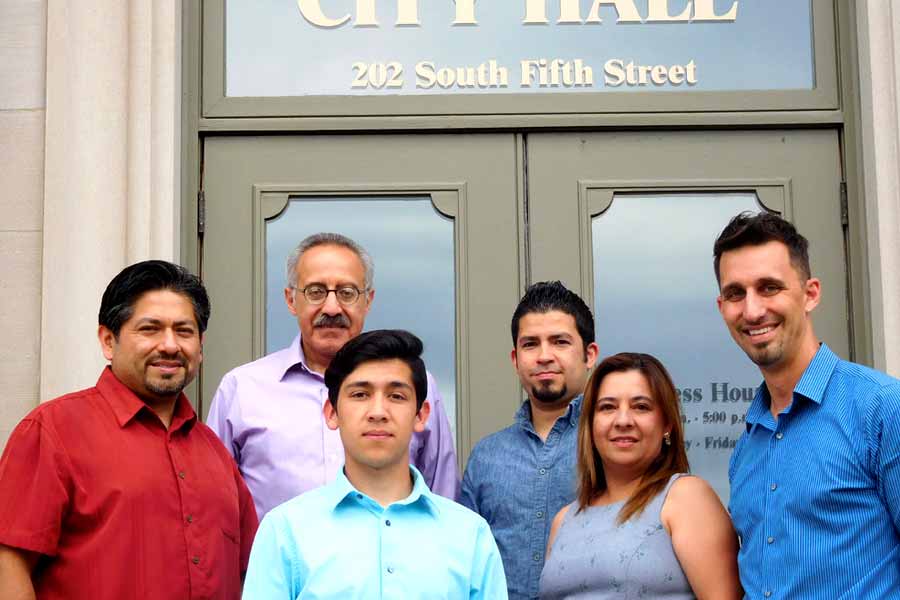 Goshen has a vastly diverse population –– and we believe we’re better for it.

In 2015, Mayor Stutsman formed the Latino Advisory Committee, a council that advises the mayor on issues pertaining to Goshen’s large (and growing!) Latino population.

We give each other a leg up

A thriving business community doesn’t happen by accident. Goshen has a nurturing business environment perfect for entrepreneurs to turn dreams into reality.

The Chamber of Commerce’s Launchpad, a shared office space and business incubator, offers a low-overhead way for start-ups to get off the ground. The Chamber’s Pitch Night program provides a cash award to the entrepreneur with the best business proposal. Additionally, the Chamber offers a Leadership Academy for future leaders in both the public and private sectors. 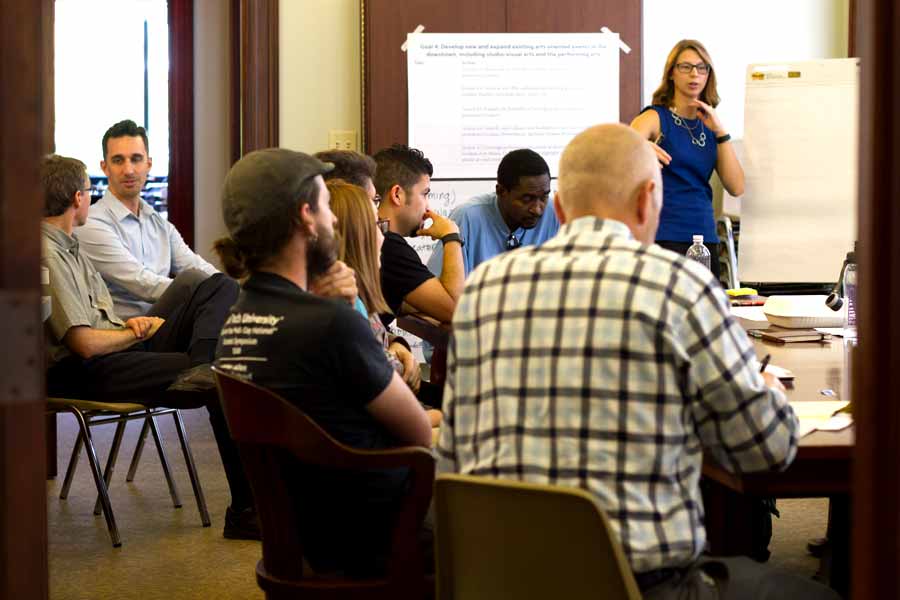 We live for the arts 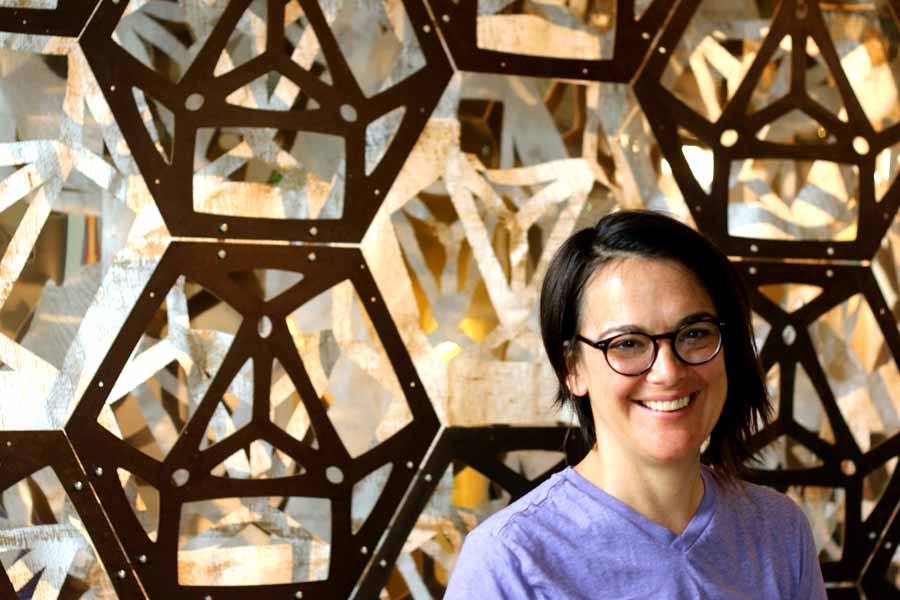 Local artist Christa Reuel poses with an art installation at Arts on the Millrace 2017, just one of Goshen’s many art fairs and festivals. Photo credit: Lynne Zehr

In 2016, Mayor Stutsman formed the Mayor’s Arts Council, a committee that works to connect the public to artists and arts events. Goshen is also a place where youngsters hone their skills both in the school system and non-profit organizations including Goshen Youth Arts. Also, artists can join one of Goshen’s many guilds, including the clay, painters, jewelers, woodworkers, and photography guilds.

We are committed to a cleaner planet

Goshen is green –– and getting greener.

Goshen was the first community in Indiana to earn a Gold Designation from SolSmart, a program funded by the U.S. Department of Energy, for taking steps to encourage solar power. Because of this and many other initiatives, solar use has increased dramatically in recent years.

Additionally, Goshen’s City Forester has drafted a long-term plan to provide Goshen with 45% shade-tree coverage by 2045. And recently, Goshen was named a Bicycle-Friendly Community by the League of American Bicyclists. 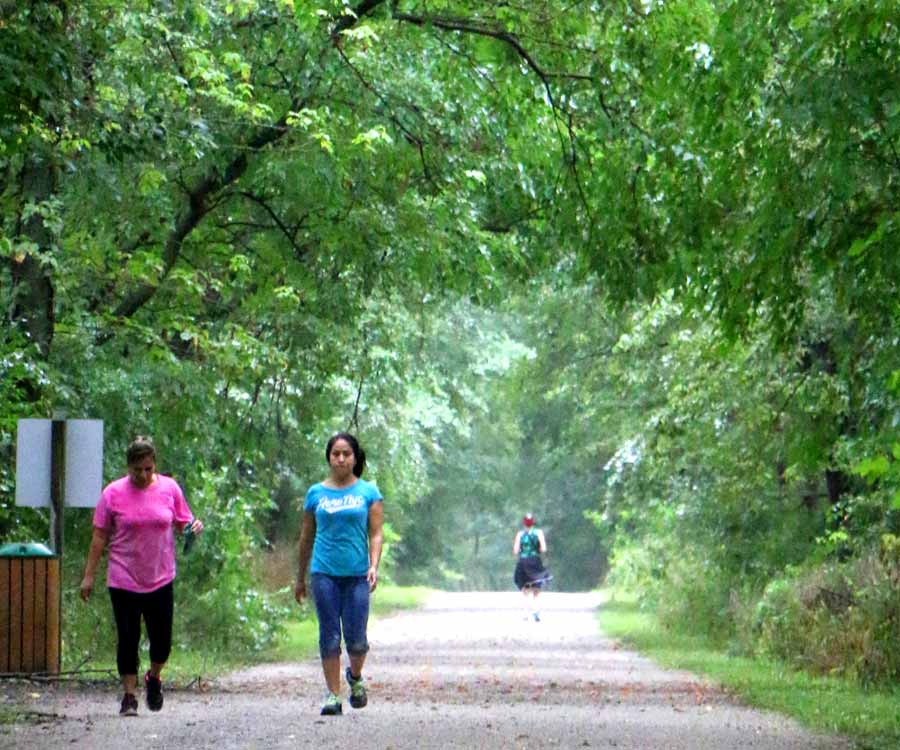 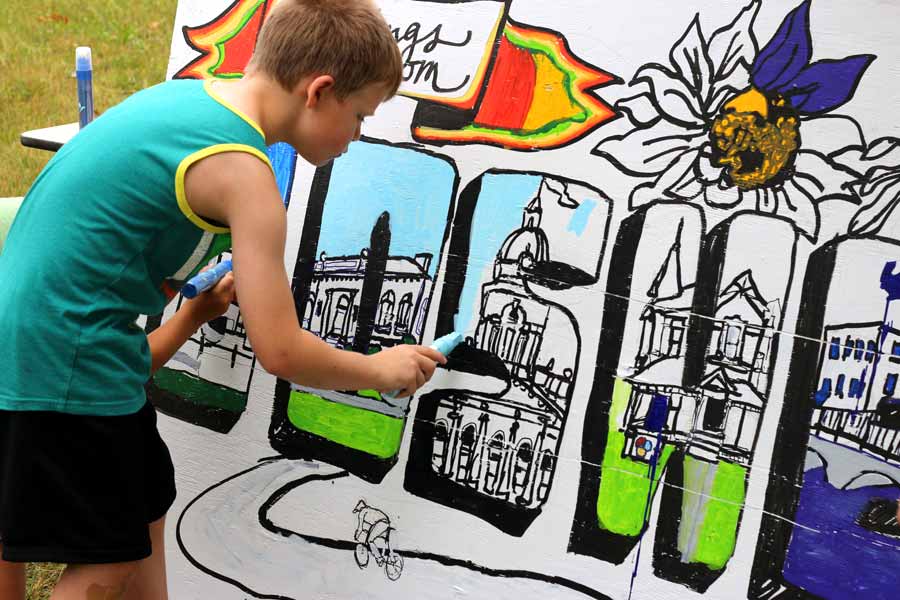 Children add to a “Goshen” mural at Arts on the Millrace 2017.
Photo credit: Lynne Zehr

So there you have it. We’ve been recognized on the state level because we’re a city made up of welcoming, passionate, creative people working for the greater good.

You don’t see that everywhere, but we have it here – and you are welcome to join us.