A One-of-a-Kind Place for Runners

Doug Yoder • The Good of Goshen 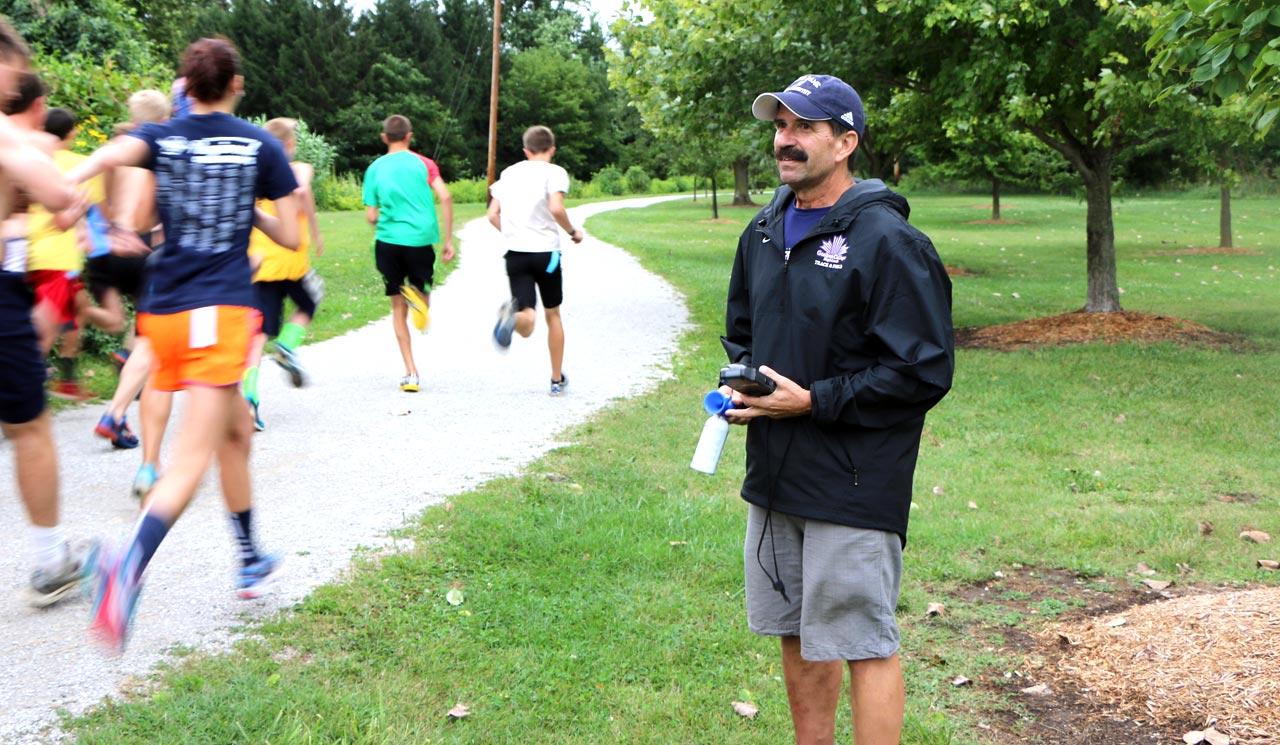 Goshen has earned accolades  for being a bicycle-friendly community, but the city also has also developed a strong running culture.

Goshen College hosts the Maple Leaf Indoor Marathon every winter. Every April brings the First Fridays’ Green Day Frolic, a 5K run and 2K fun walk, in and around downtown Goshen. The summer brings the Elkhart County 4-H Fair and its Parade 5000, a road race that leads the annual fair parade. Other formal running events occur throughout the year, like the Run for Relief each fall.

While most of those events are mostly built on the spirit of competition, the local running community is built on support and wanting each other to get better.

Doug Yoder (GC ‘77) started teaching at Goshen High School in 1979 and, without any track background, was asked to help coach the school’s boys track team, later coaching the girls team and adding cross country coaching to his resume. His coaching and running expertise grew, but it wasn’t until 1995 that he became a full-fledged runner.

“I wanted to get myself in shape to keep up with the students,” he says. “Then, I just sort of got caught up in it.”

For the past 12 years, Doug has coached at Goshen College. He began the annual indoor marathon and organizes it each year.

Goshen made the League of American Bicyclists list in 2011

The third annual Purple Run 5K/2K sponsored by Anytime Fitness in Goshen is Friday, May 1, 2015

For a listing of upcoming runs in the region, check out Two Rivers Running Club

He’s also taken over leading a less formal running event in Goshen. Every Tuesday at 6:30 p.m. between the first Tuesday in June through the last Tuesday in August, Doug meets with others for a “Rieth Run,” a 2K, 3K, and 5K run through Rieth Park.

“The purpose is just to provide an opportunity for people to just come out and run,” Doug says. “It’s a no frills operation,” though Doug does provide water coolers, give out ribbons, and keeps a result board online.

Usually around 80 people go on the seasonal runs. A few times, the crowd has been more than 100, while other weeks are smaller.

“There’s a lot of camaraderie,” he says. “People get to know each other and create friendships.”

Encouraging runners to keep growing overlaps between his community running work and his coaching.

“As with teaching, as a coach, you’re always striving for someone to be able to use their talents to their fullest,” he says. “You hate to see a gift wasted. So, you can first help a person recognize their gifts and then do what you can to help them reach their potential.” 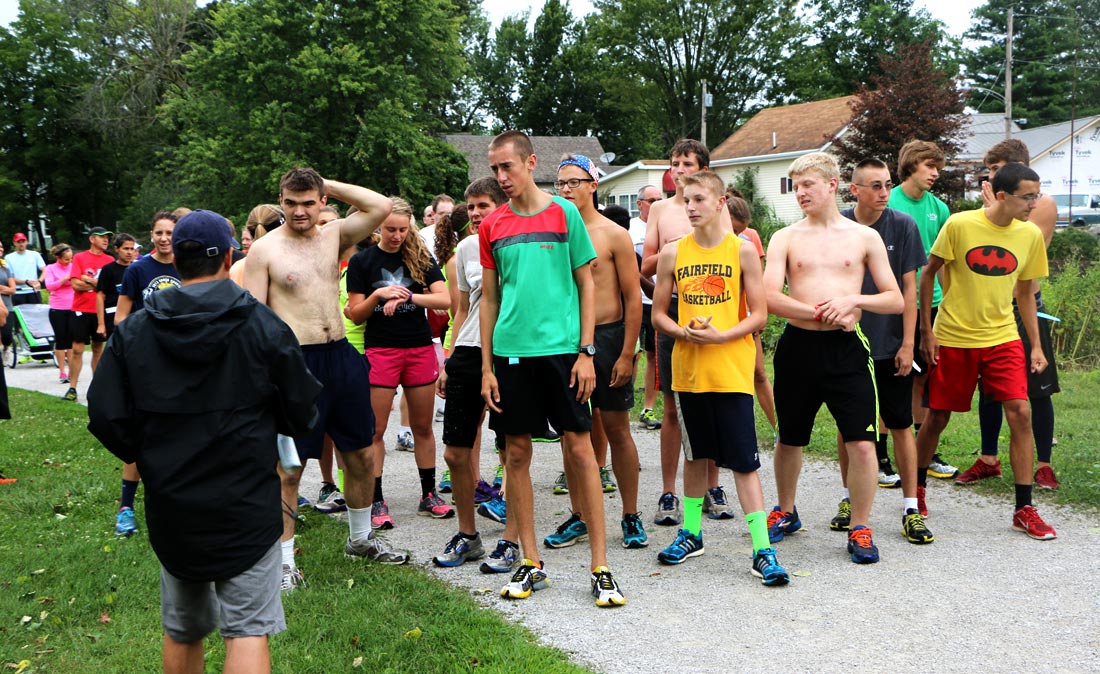 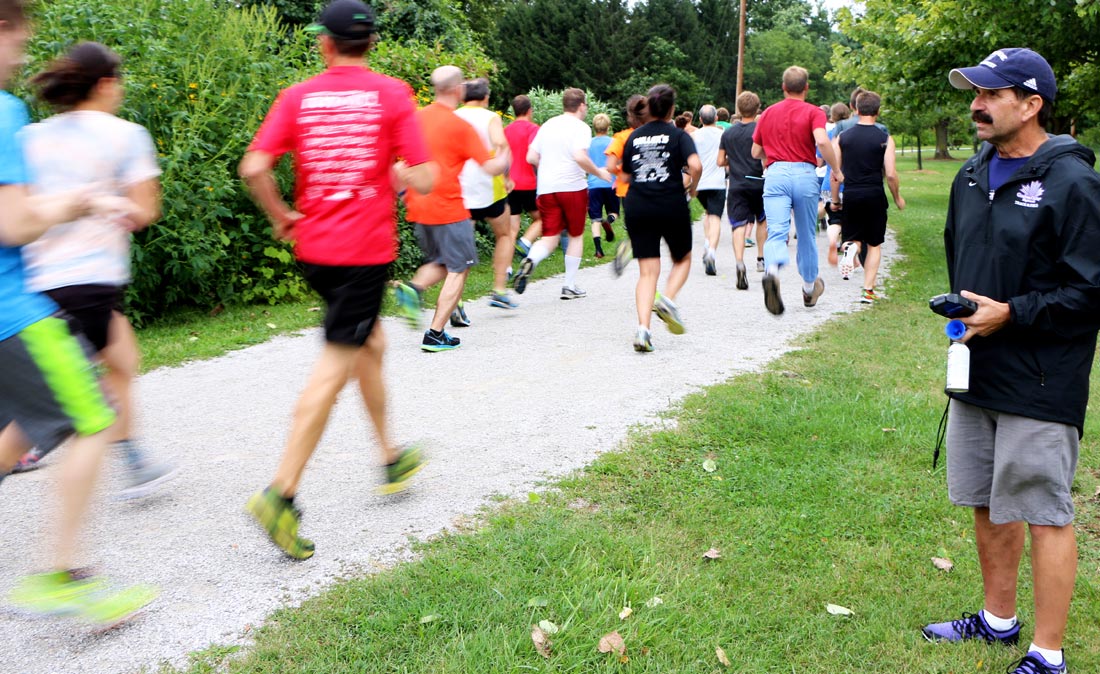 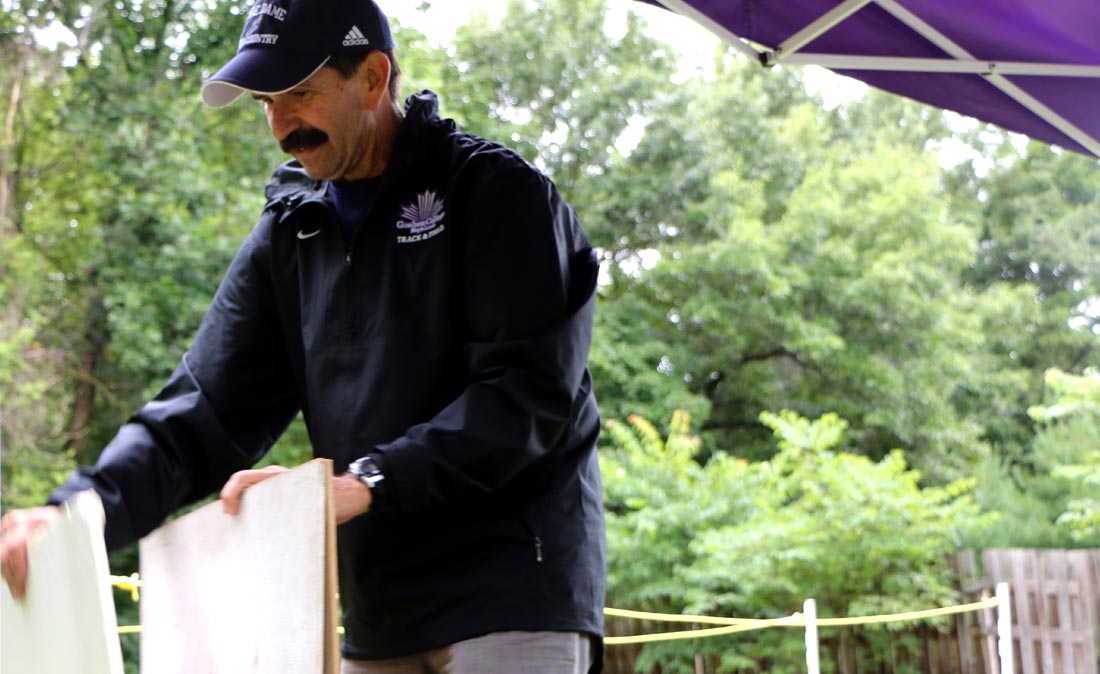 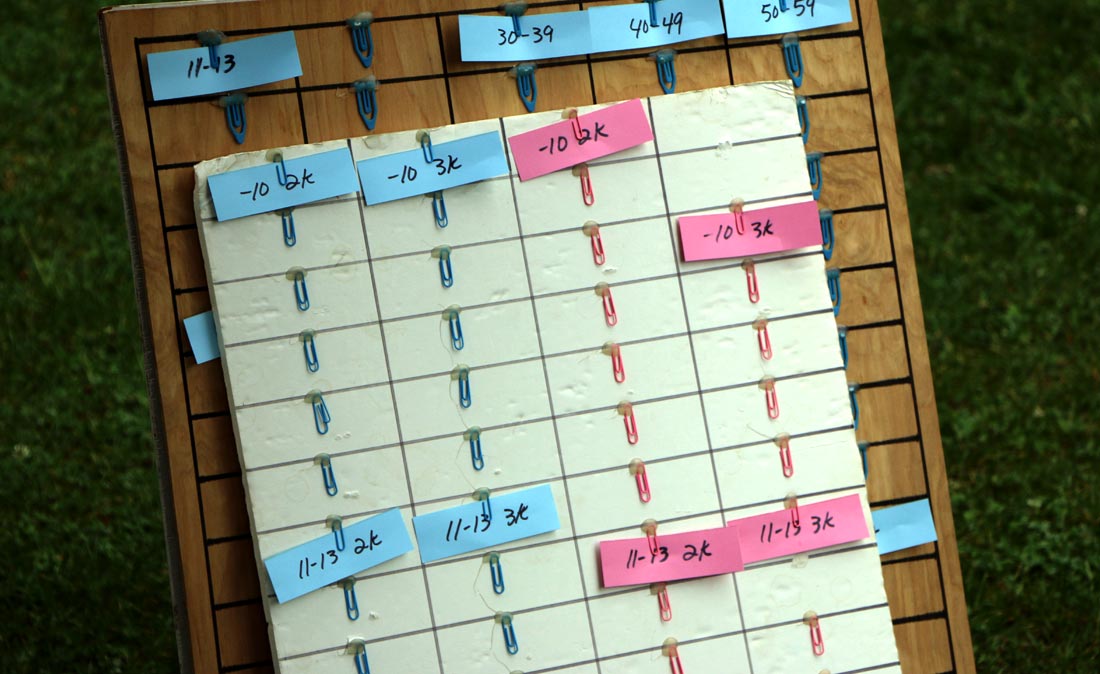 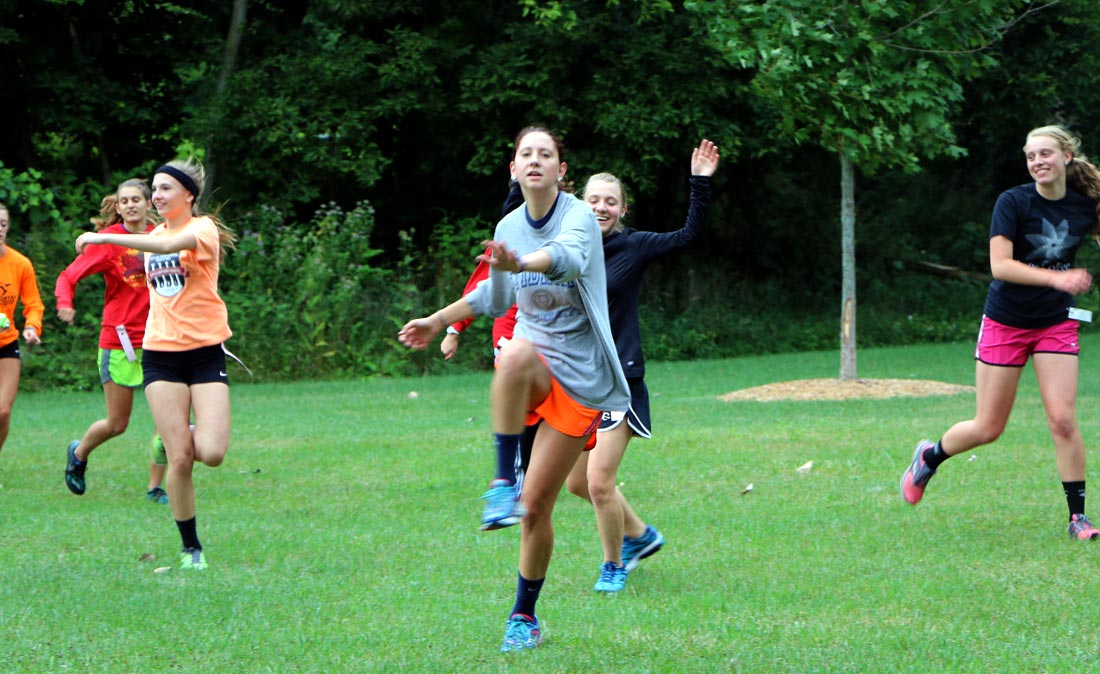 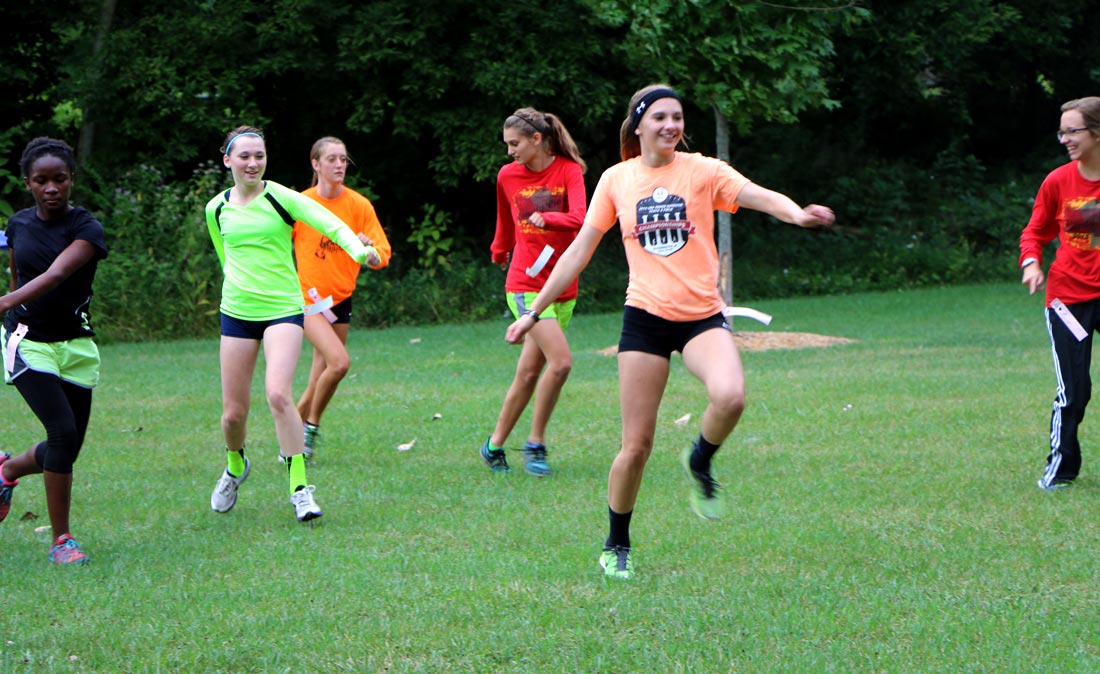 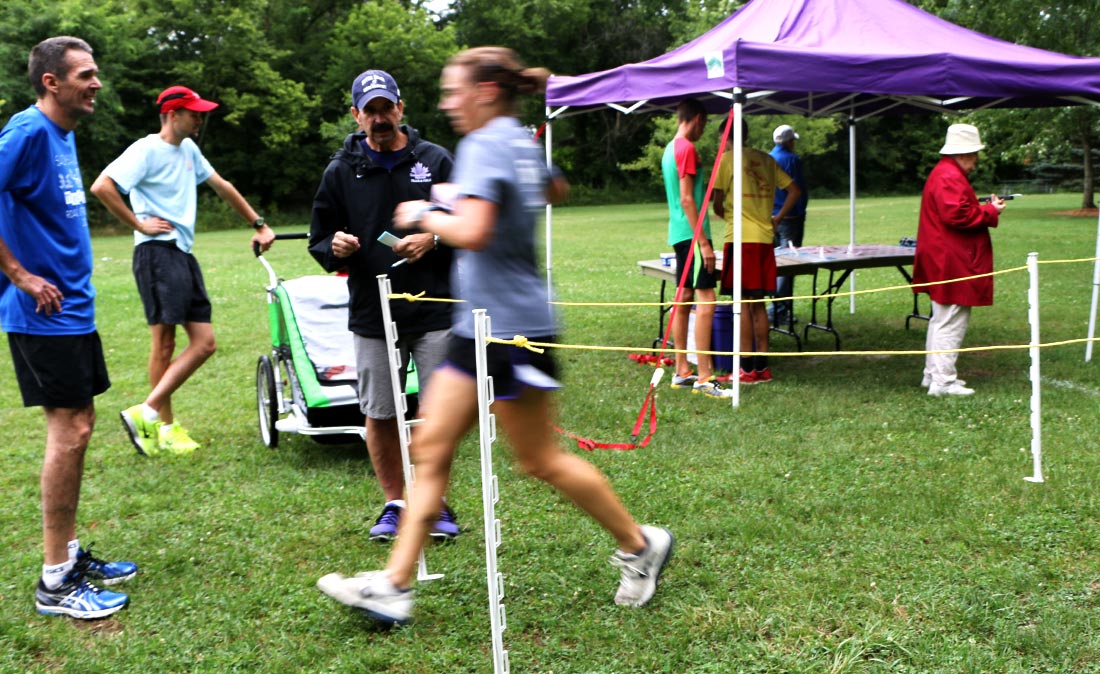 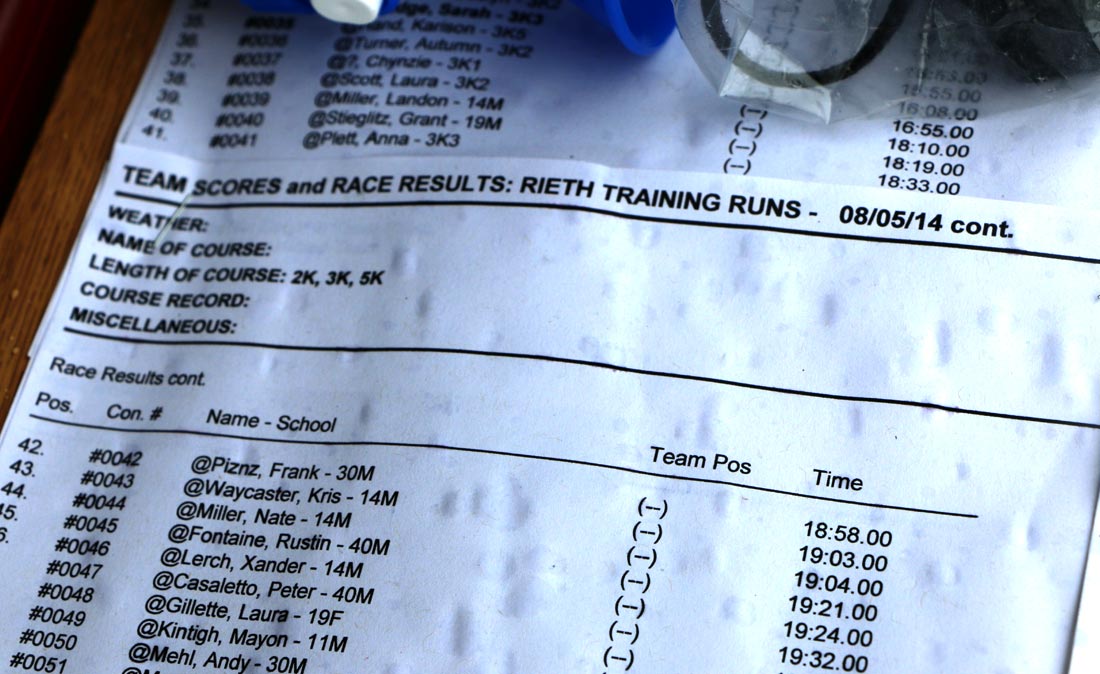 “I think Goshen’s fortunate to have the trail systems we have,” he says. They’re safe, they’re beautiful, and go far beyond the city limits. “You can run all the way to Ox Bow (or Shipshewana) if you want to.”

“You’re out in nature. There are interesting things to look at.”

“It obviously keeps me healthy. It’s just a nice way of keeping sane. It just gives you time to reflect. In a sense, it may be like meditation.”

“Goshen is a good place to be,” Doug says. “You may think the grass is greener somewhere else, and it may be, but our grass is pretty green too.” 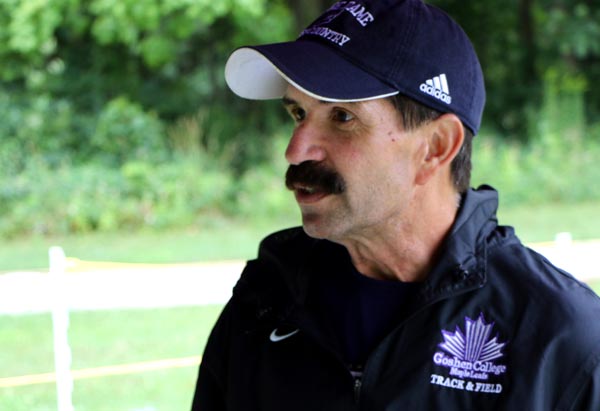 “As with teaching, as a coach, you’re always striving for someone to be able to use their talents to their fullest.” 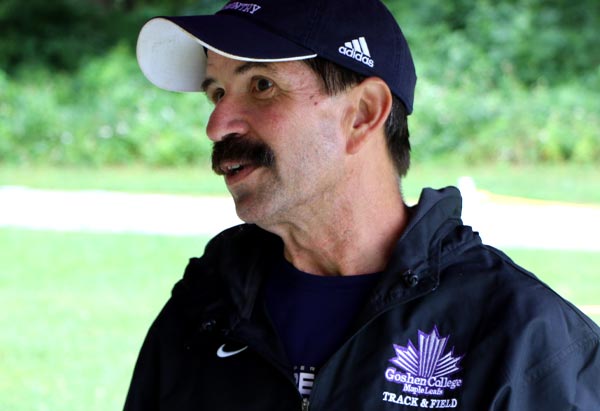 “I wanted to get myself in shape to keep up with the students. Then, I just sort of got caught up in it.” 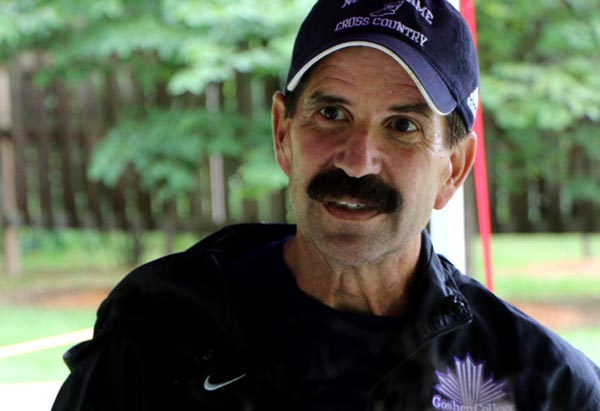 “I think Goshen’s fortunate we have the trail systems we have. They’re safe, they’re beautiful and go far beyond the city limits.”