A Part of History:

Vince Traxler • The Good of Goshen 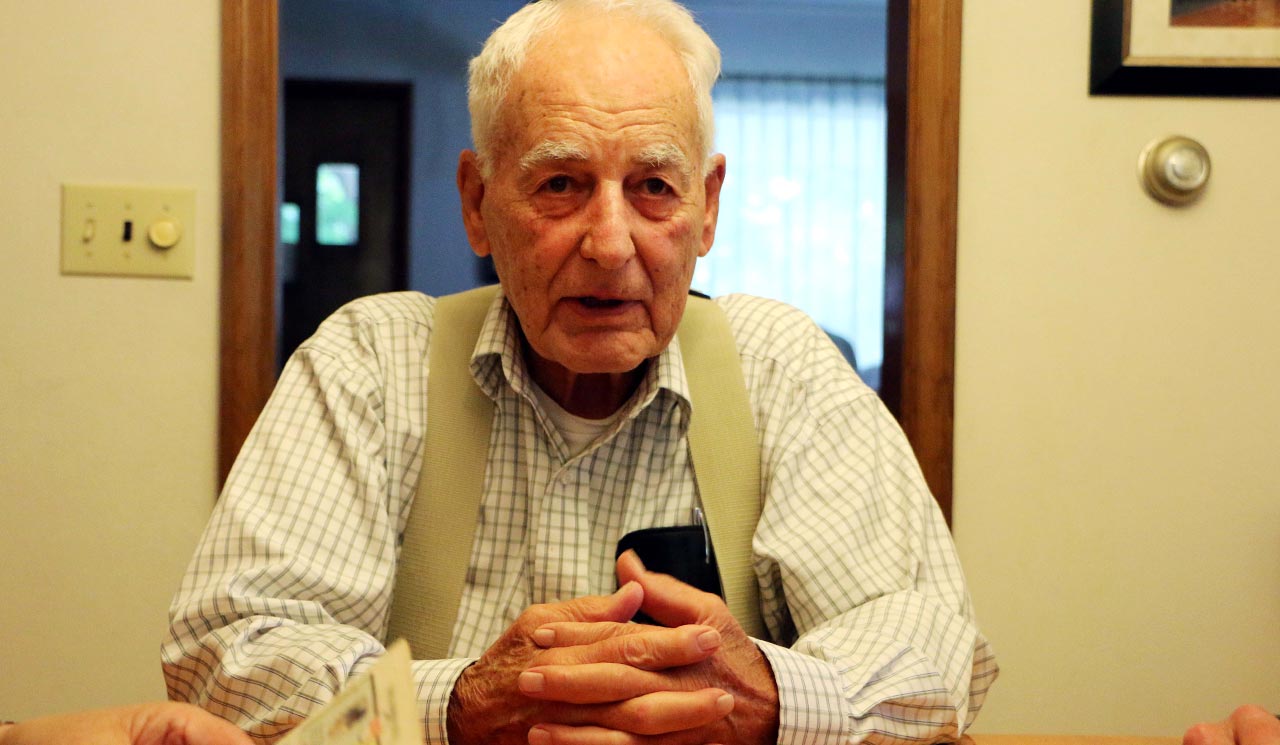 Vince Traxler heard a noise in the night.

It was similar to one he’d heard before. Vince grew up on a farm south of Kendallville, and the farm was about half a mile away from railroad tracks. In the summer, when the windows were open, Vince would hear the freight trains rattling through the countryside.

Vince remembered a night when he was lying in a bunk and heard a rattling sound.

He wasn’t. Traxler was lying on a bunk on an island far from home. The rattling sound was made by Seabees building a runway. And Vince Traxler was a Marine serving during World War II.

Vince, a longtime Goshen resident, is seated at a table in his Oak Lane home. He’s sharing memories, often referring to a book or a magazine or photo album to illustrate a point or historical reference.

Vince, 94, is recalling a time when he himself was a part of history.

Before war broke out, Vince was a farm kid in Noble County. In December 1940, he visited an aunt and uncle in South Bend, where he saw the Acme School of Tool and Die Design. He soon learned that what the school had to offer was “something right down my alley.”

Vince went to school at Acme for a year before he and a friend found jobs at a GE plant in Fort Wayne. He worked there for about six months. Then his draft card number came up.

“I figured I’d be getting in sooner or later anyway, and I thought, ‘If I’m going to be in the service, I might as well get in on the ground floor,’” he said. “The Marine Corps caught my eye, so I joined up with them.”

Vince said his parents had to sign for him to enlist.

“My mom wasn’t real happy about signing,” he said. “She was a devout Catholic, and she thought she was signing my death warrant.”

Vince arrived in Goshen in 1946 and worked at Penn Electric Switch, which later became Johnson Controls. He retired from Johnson Controls in 1988. Vince and his wife Ruth were married June 30, 1948. They have six children: Fran, Gail, Danny, Matt, Chris, and Ruth. All are Goshen High School graduates. Vince said his three daughters are teachers, and his three sons are Purdue University graduates. Vince started building the family’s Oak Lane home in the spring of 1950, moving in during the fall of that year. 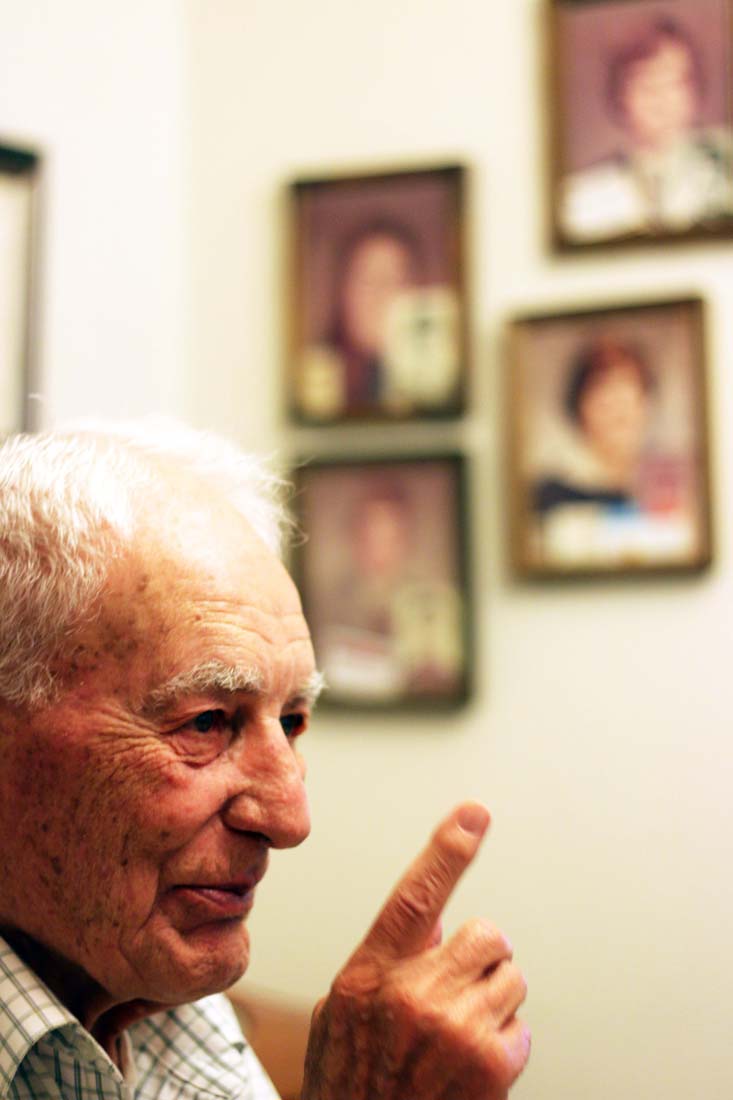 Vince enlisted June 18, 1942. Once in the Marines, he found that everything he expected about military service went out the window.

“In the Marine Corps, I figured I’d be in with a bunch of roughnecks that would fight at the drop of a hat,” he said. “I got out there and found out they treated me like a gentleman. I’ve never been abused by any Marine.”

Vince did well on his math scores, and the Marine Corps sent him to Great Lakes Naval Base to learn about torpedoes.

“At the start of the war, the Marine Corps thought they’d use a lot of aerial torpedoes to sink Japanese shipping,” Vince said. “By the time I got out of school, they dropped that concept and went to dropping bombs to destroy shipping. So now I am, a buck sergeant as a torpedo-man — nobody needs me.”

Vince was finally sent overseas where he was stationed at Ulithi atoll located in the Caroline Islands of the western Pacific Ocean. During WWII, he spent time on Falalop Island at Ulithi, and he was also transferred to the island of Peleliu, Palau. His war duties included building, maintenance and other projects.

Pictures tell part of Vince’s story. He points out a black-and-white photo of his younger self, a guy sporting a mustache to make him look older. There’s a picture of Vince in the truck he drove. Also included is a photograph of Japanese forces surrendering to U.S. officials. Another snapshot is a photo of young men just doing their job.

“Here we’re hauling in bombs,” Vince explains. “Carry ’em in and carry ’em out, as they needed them.” 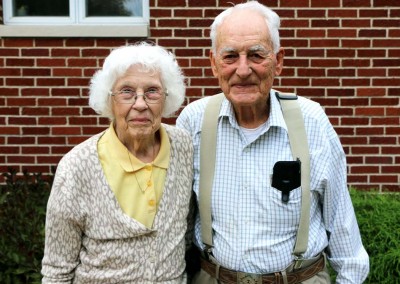 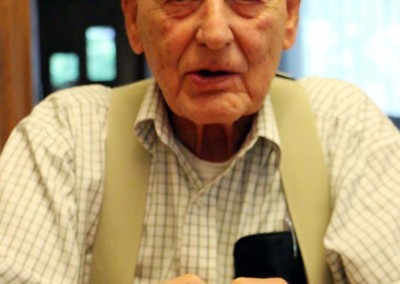 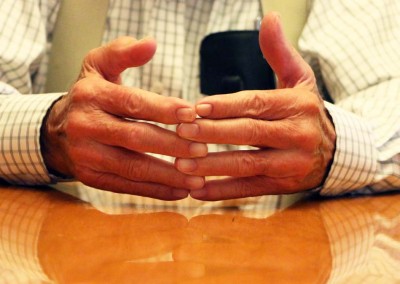 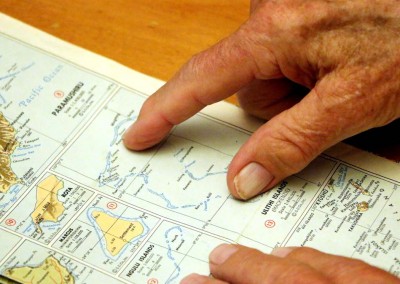 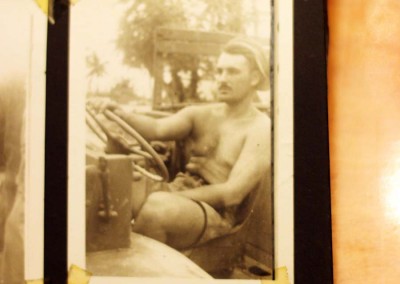 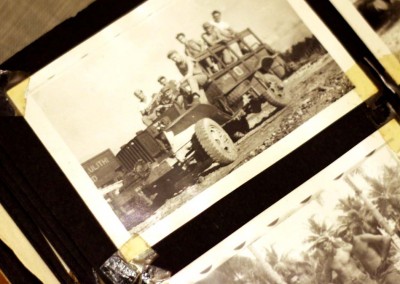 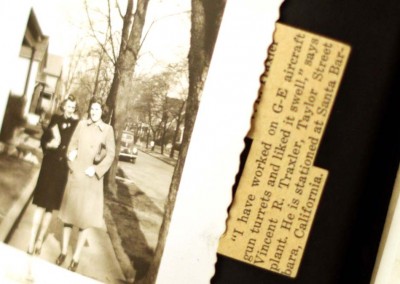 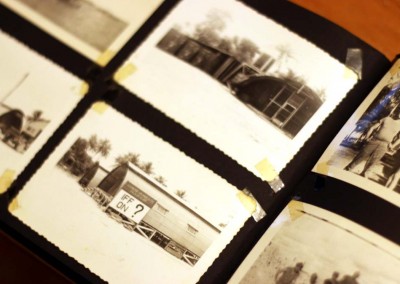 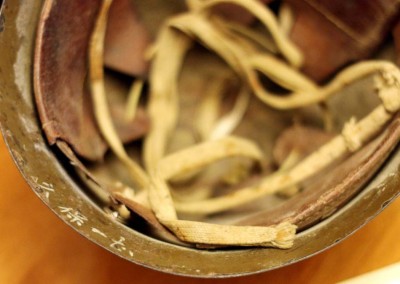 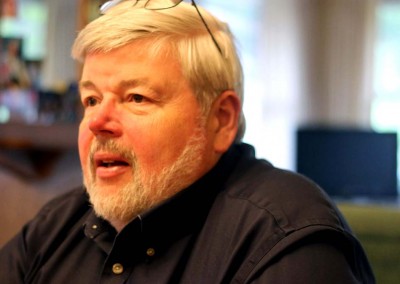 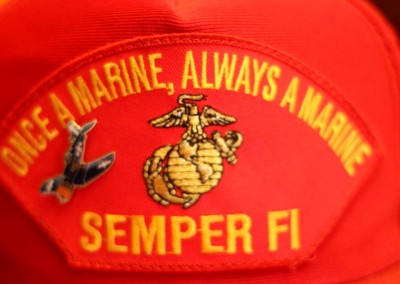 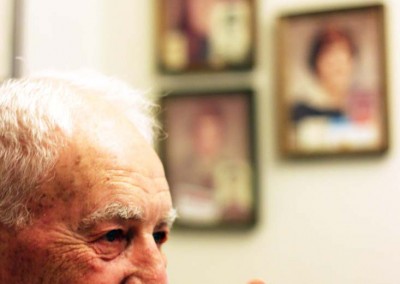 For the benefit of his visitors one recent evening, Vince shared non-photo pieces of wartime history. One is a Japanese soldier’s helmet, long separated from the soldier. Another is a .30-cal., bolt-action rifle that once belonged to a Japanese combatant.

“It’s heavier than it looks,” Vince says of the firearm. He’s right.

Vince was discharged in December 1945 with the rank of technical sergeant. The next year, he arrived in Goshen.

Vince is proud of his military service, though he points out he didn’t have the most dangerous job in the war. “It was the way it worked out,” he said. “Anyway, here I am.”

One man who certainly doesn’t think any less of Vince’s wartime service is Orv Myers, and he’s not alone. Orv is senior vice president of the Goshen Veterans of Foreign Wars Post’s Men’s Auxiliary. He works with the committee that organizes Goshen’s annual Memorial Day parade, and suggested Vince as a candidate for 2015 parade marshal.

“They said if he would do it, they would be honored,” Orv said. “I got the full honors of being his driver that day.” 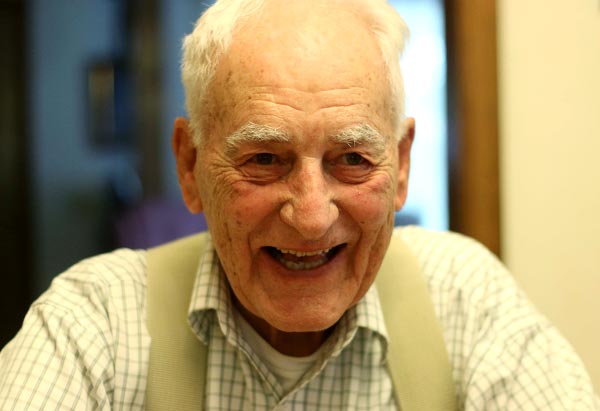 “If I’m going to be in the service, I might as well get in on the ground floor.” 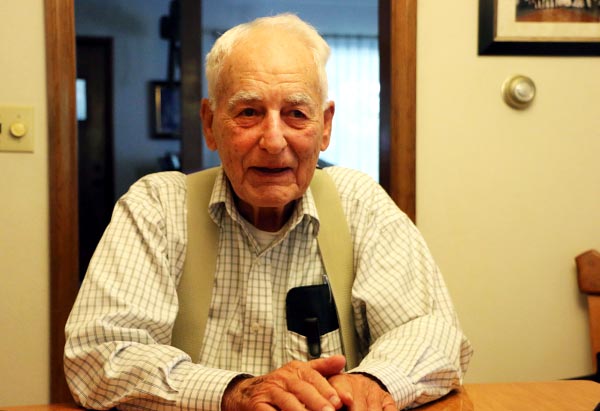 “I got out there and found out they treated me like a gentleman.”