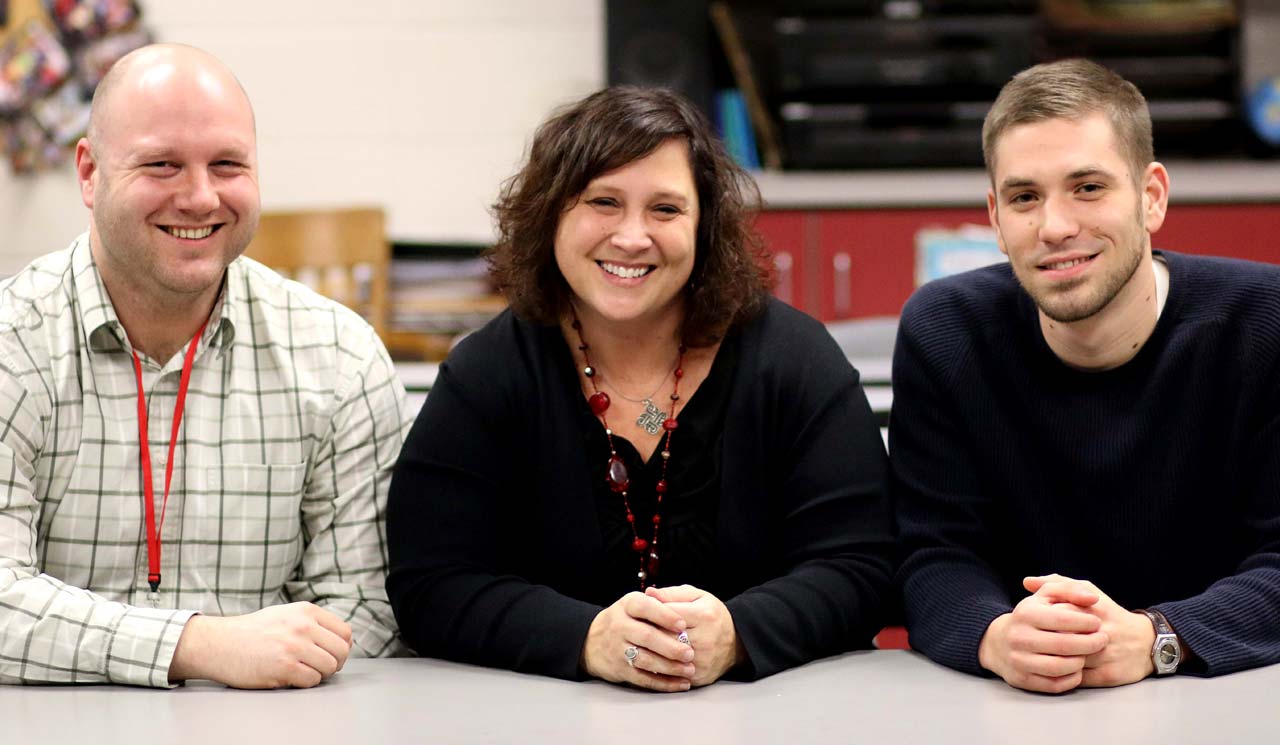 It’s early afternoon at Goshen High School, and teacher Jen Eberly is giving instructions to her students. The pupils are preparing a final English assignment as the semester draws to a close.

Through this writing project, the students have the opportunity to show what they’ve learned. They won’t be able to seek advice from or ask questions of their teacher. At this point, it’s all up to them.

Not that the students won’t have any outside input. Later in the class, the students will be paired up for “peer editing,” with classmates reviewing each other’s work.

“It’s two people working together,” Eberly tells them. “We find mistakes together. We fix them together.”

This may all sound like routine schoolwork. But for these students, the assignment takes on an added dimension: doing it all in a new language.

The students in Eberly’s class are part of Goshen Community Schools’ English Learner program. They’re working hard to achieve academic success and learn a new language at the same time – and Eberly and her fellow EL instructors are working just as hard to guide them.

“We’re working with students to get them proficient in academic English language skills,” Eberly said. “We have five different levels. Levels 1 through 4 are for students still working on gaining their English skills. Once they get to Level 5, they are considered fluent. Their language skills are assessed every year. As a school corporation and as a school, we need to show that we are making yearly growth toward getting enough students to continue moving up to different levels.”

The goal of the English Learner program is to help students from other language backgrounds learn and use English effectively, and ensure all students acquire knowledge and enhance future opportunities, while continuing to honor their cultural heritages. The program starts at the kindergarten level and extends through grade 12. Goshen Community Schools has the largest EL program in the state of Indiana for a school district of its size.

While most EL students speak Spanish as their primary language, the program also includes children whose first languages are Japanese, Khmer, Marshallese, Portuguese, Arabic, Russian, French, Cantonese, German, as well as others.

Eberly has been teaching for 19 years, the past 17 at Goshen Community Schools. She also taught in Paraguay for two years. She credits Goshen College and its Study-Service Term (SST) for inspiring her to get started in EL instruction.

“I lived over in Cote d’Ivoire, and that just kind of gave me a sense of wanting to try something like this,” she said. “I enjoyed learning languages and working with people who spoke different languages.” Back at GC, she added Teaching English to Speakers of Other Languages (TESOL) onto her elementary education degree.

Eberly said Goshen Community Schools has been fortunate to have an EL program for close to 25 years. She credits former administrator Donna Hernandez for being an early champion of the program in the school system.

Being an EL teacher in the Goshen school system isn’t without challenges.

“Some of the students have a very limited educational background (from their home countries), and that can be very challenging,” said Ben Elias, an EL instructor at Goshen High School.

“Then there’s the issue of working with students from different cultures. It’s a great part of it, but it also creates challenges. As a teacher, you have to be an observant jack-of-all-trades.”

Elias is in his fourth year teaching at GHS, and has been teaching for around 12 years overall. Prior to Goshen, he taught in Thailand and North Carolina. He said he fell into EL teaching “by accident.”

“It’s not what I thought I’d be doing when I graduated from college,” Elias said. “I kind of just wanted to travel and see the world, and I used teaching overseas as an opportunity to do that. But as I started teaching, I fell in love with it. I really enjoyed it, and decided when I came back that that’s what I wanted to continue to do.” 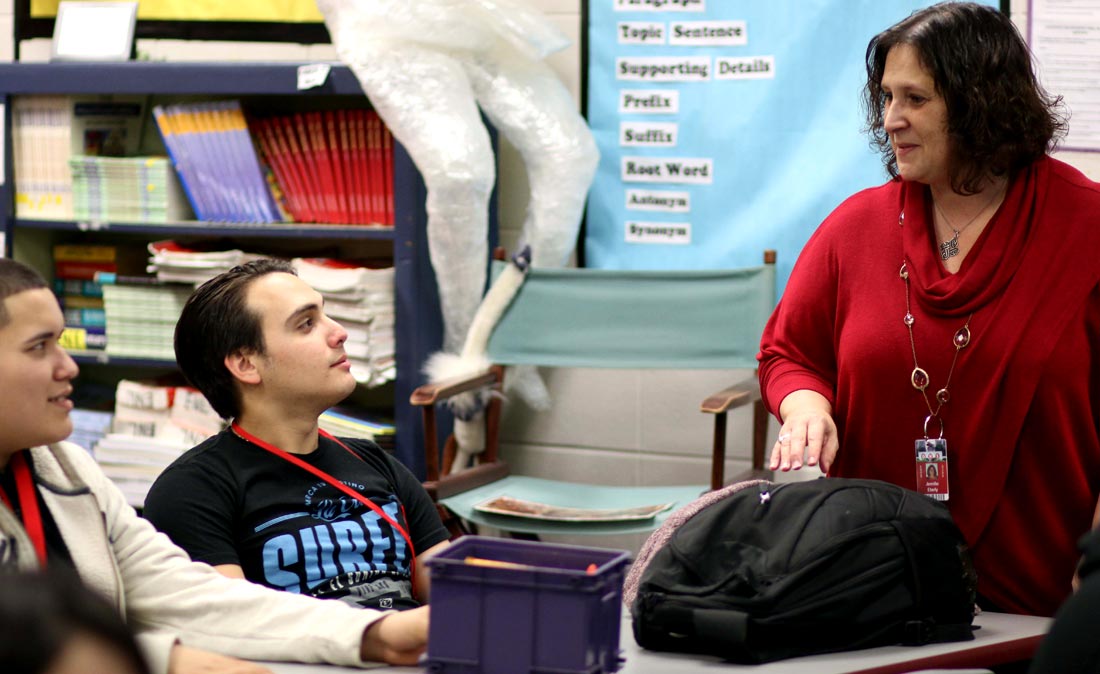 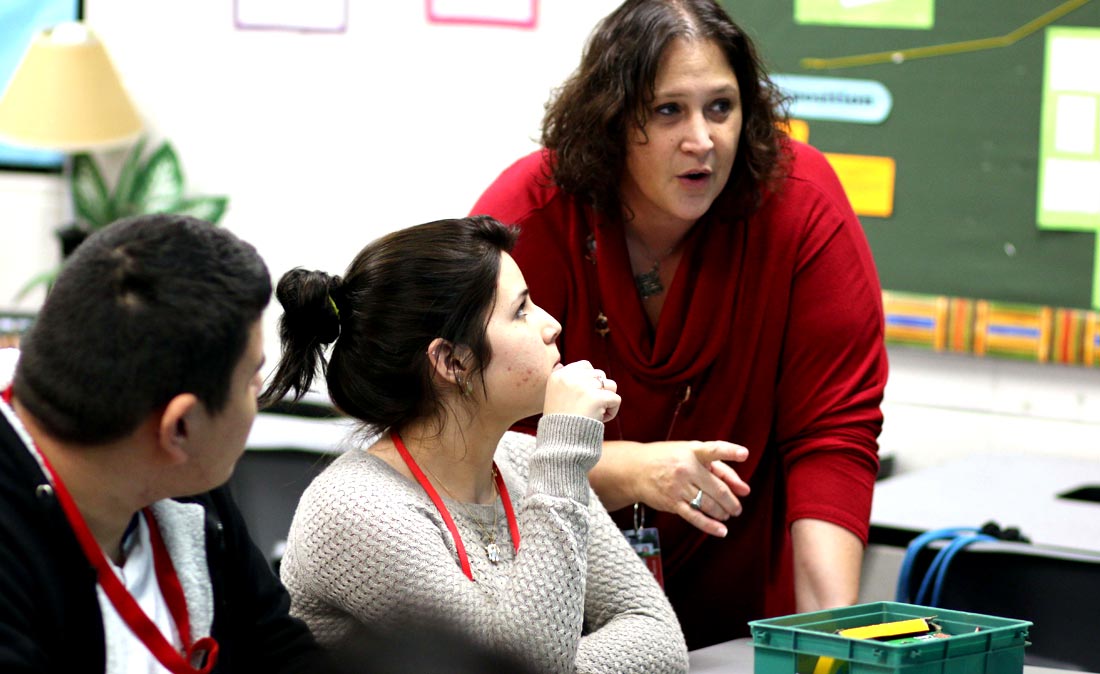 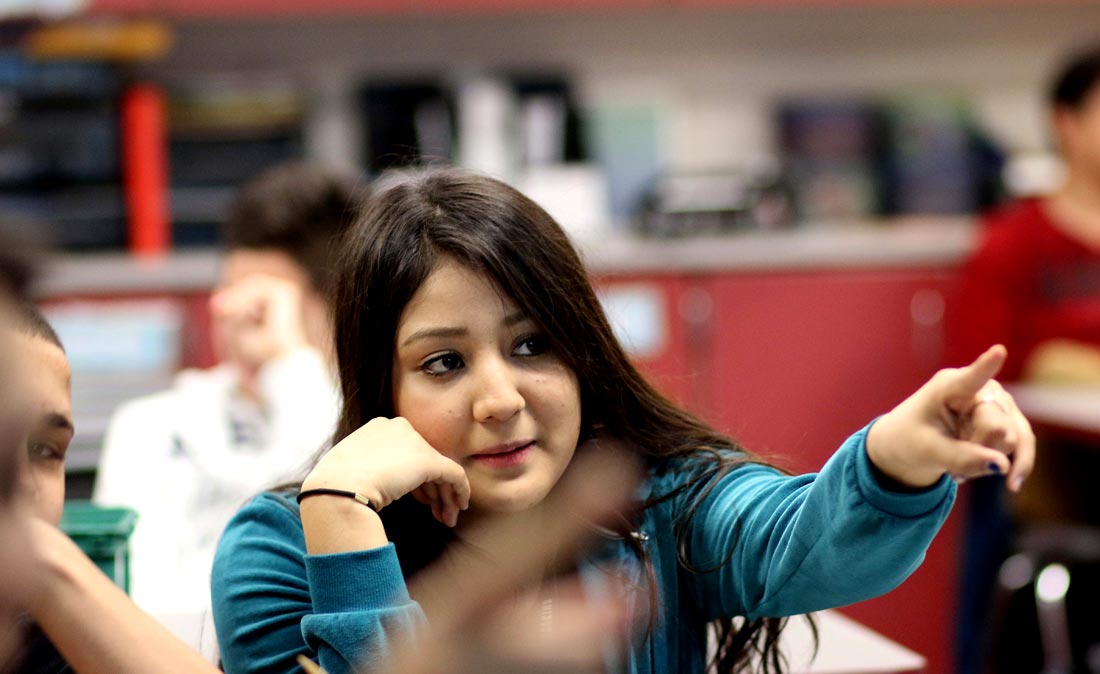 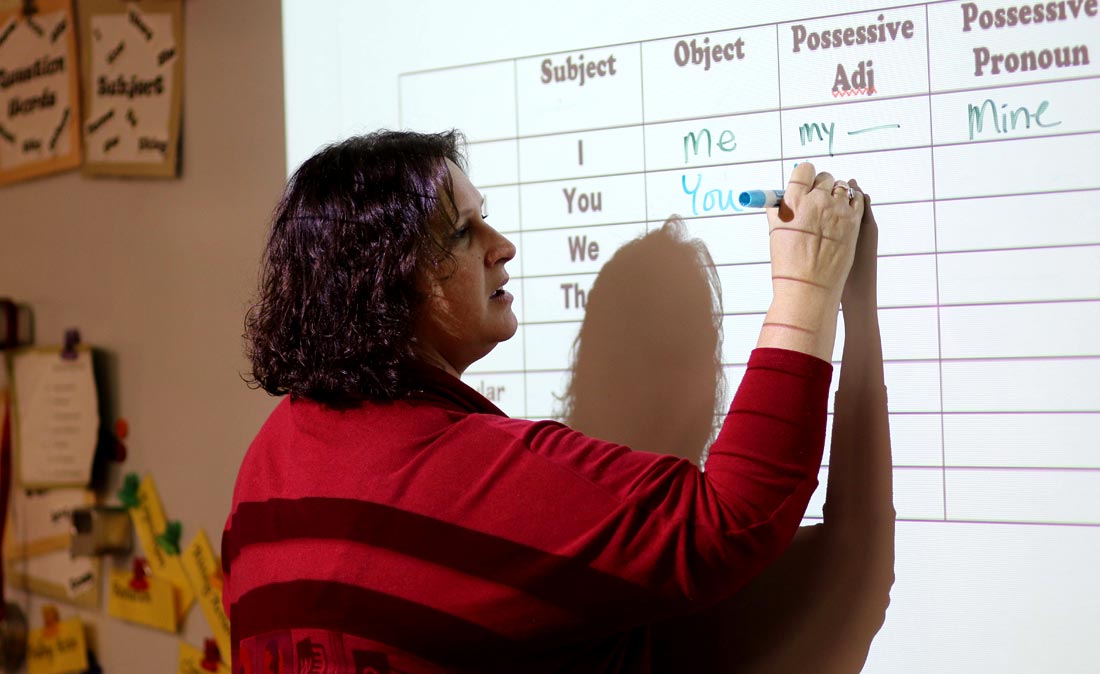 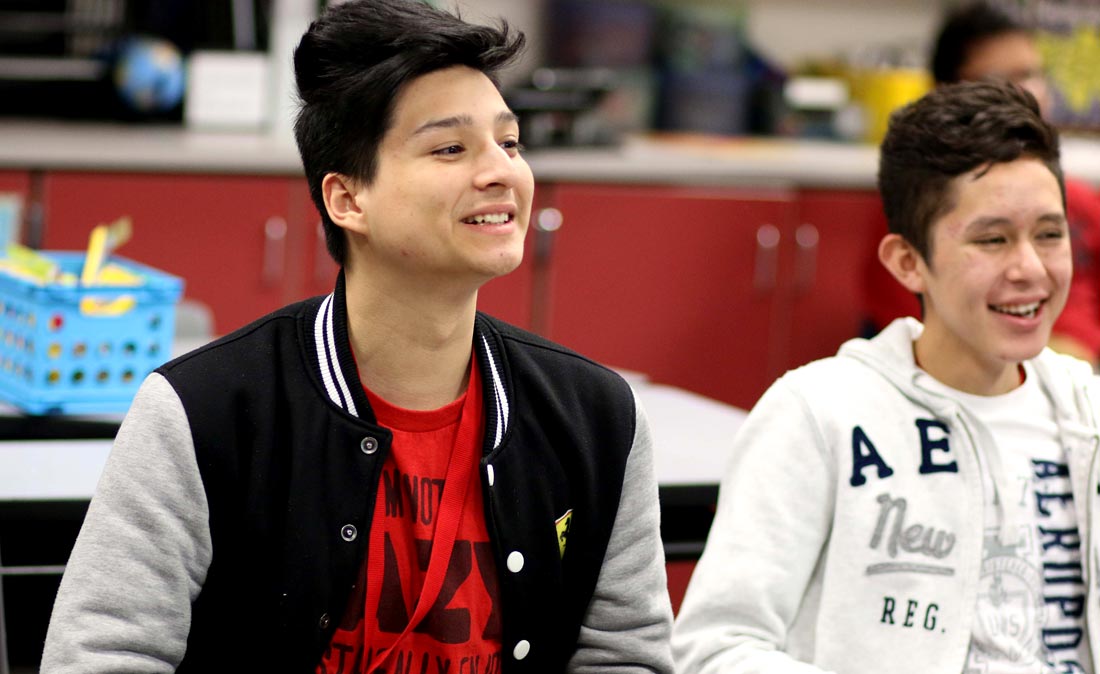 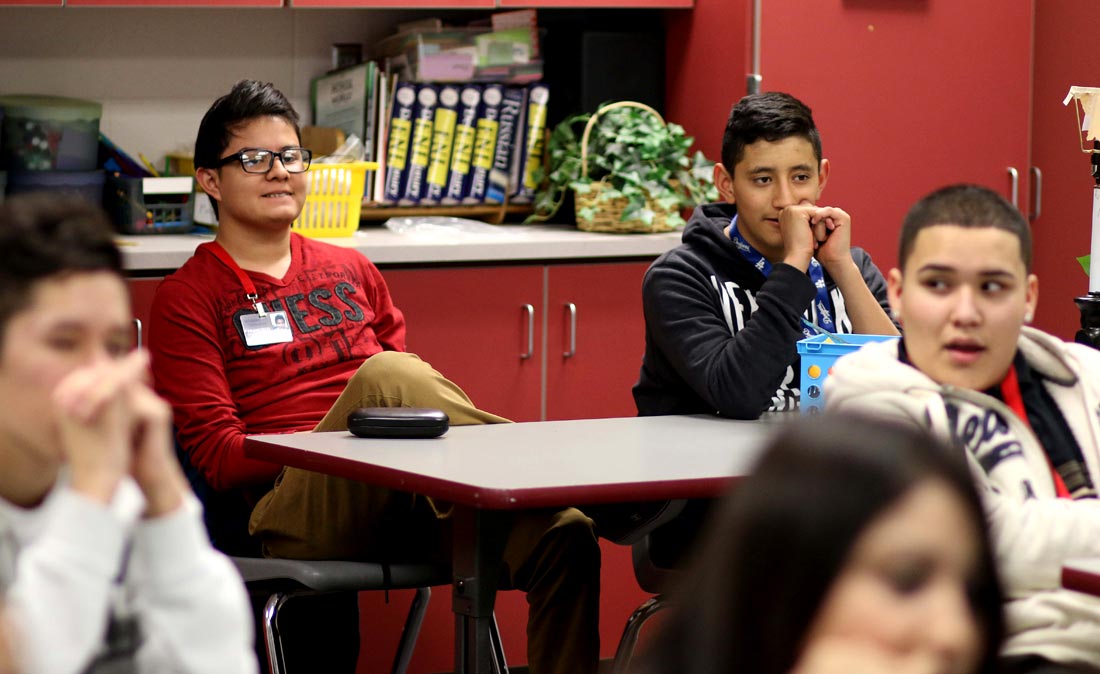 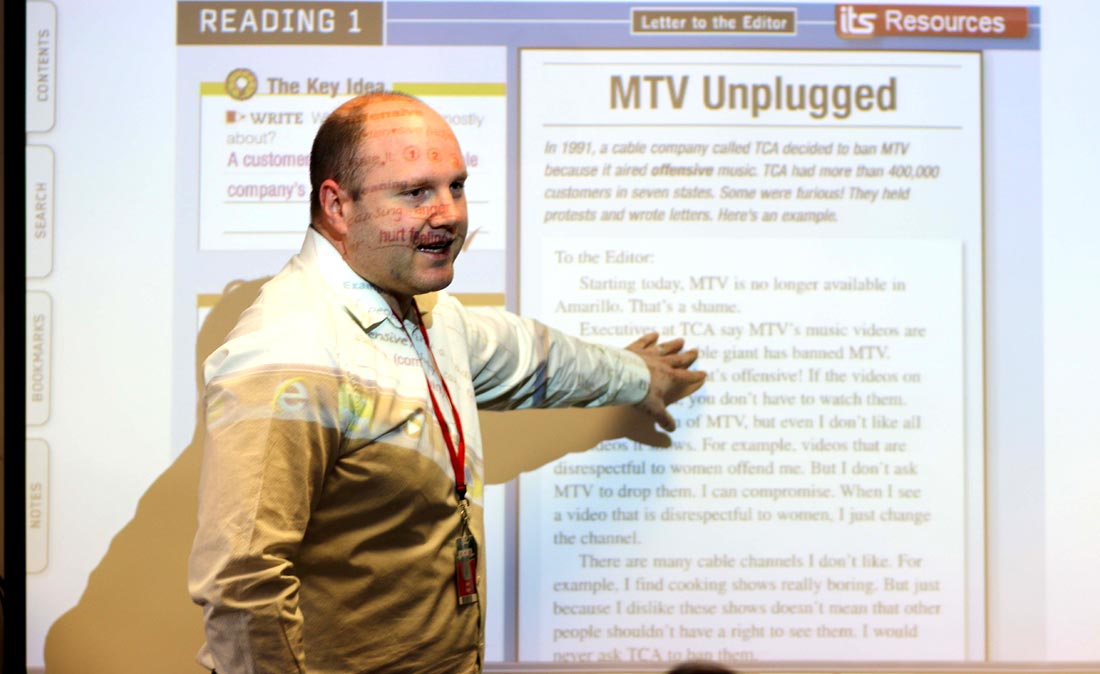 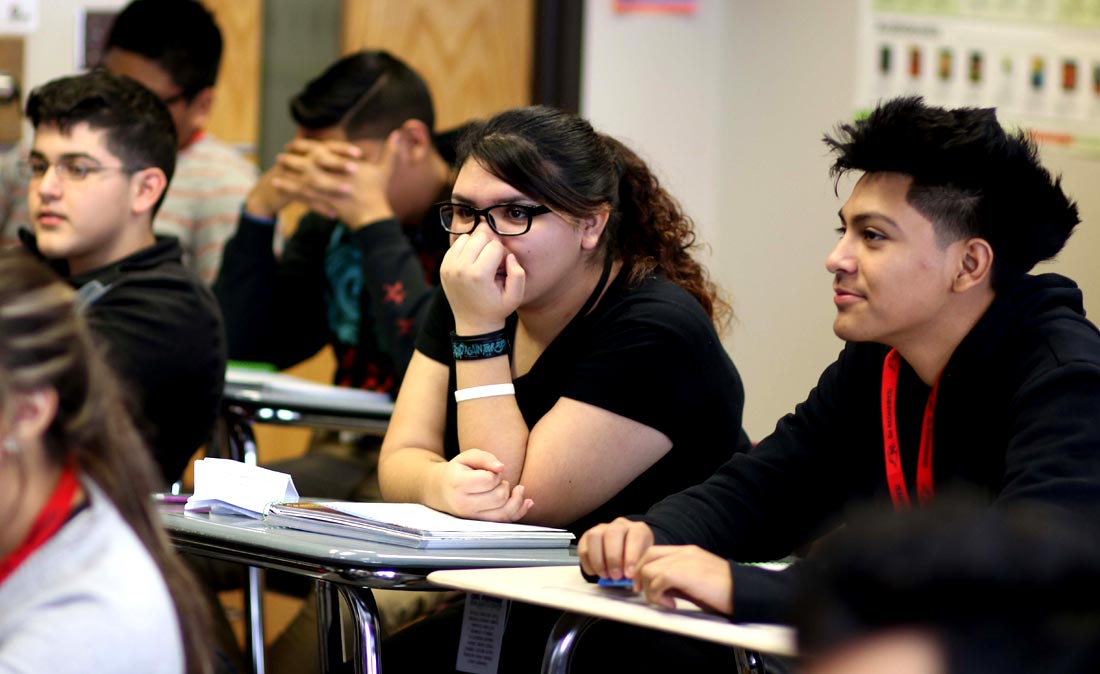 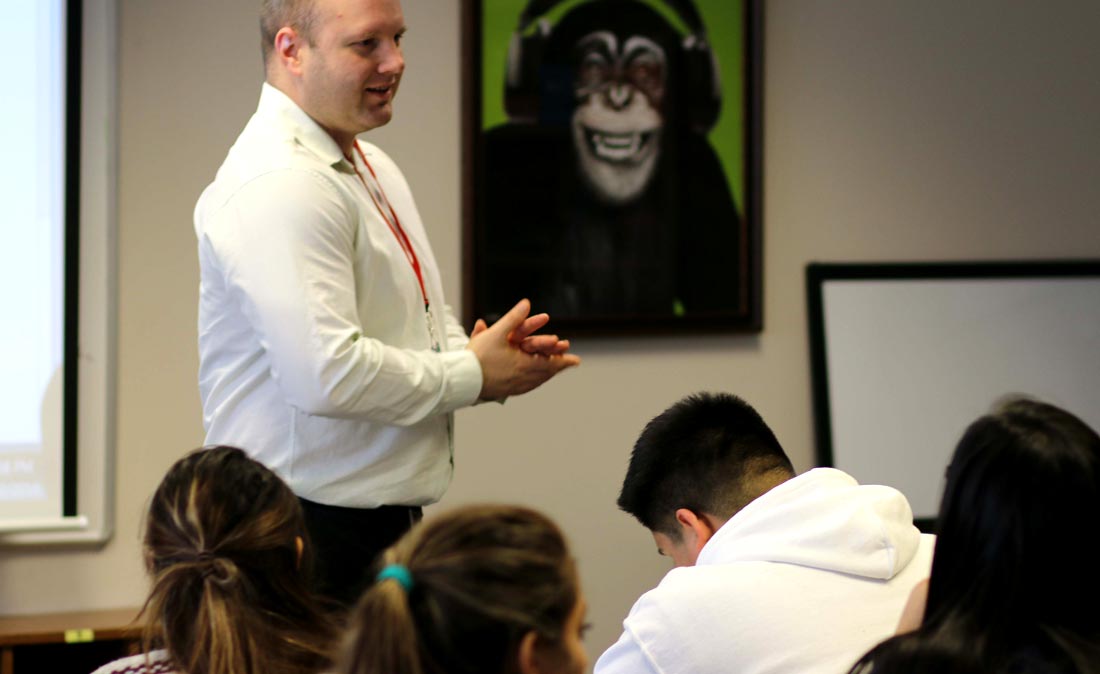 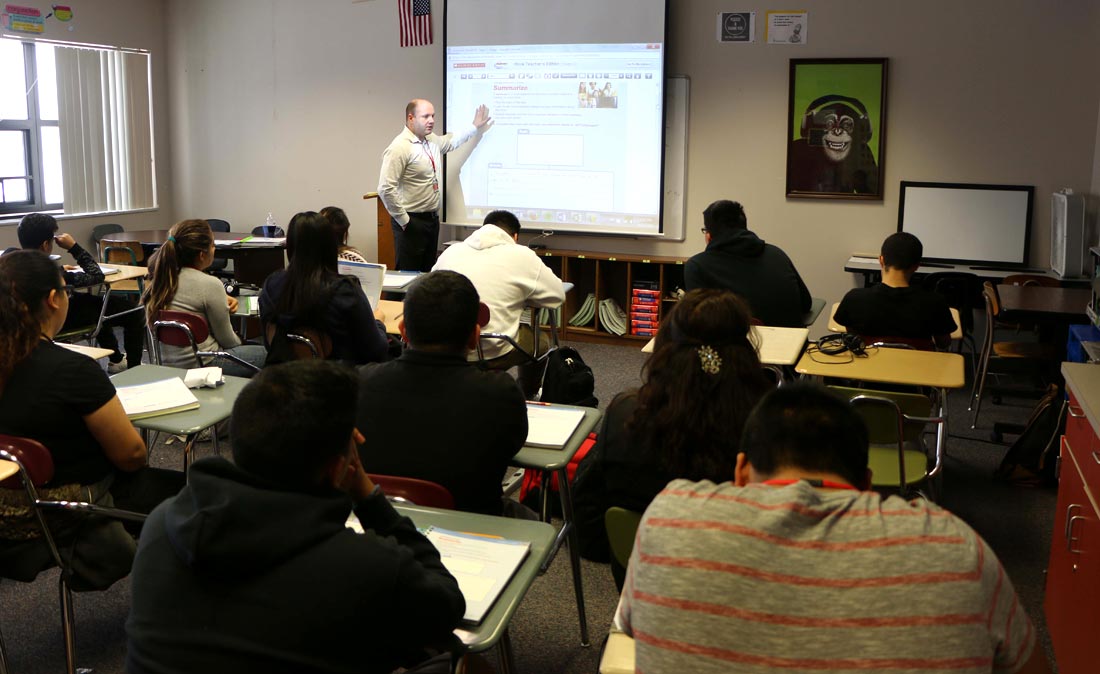 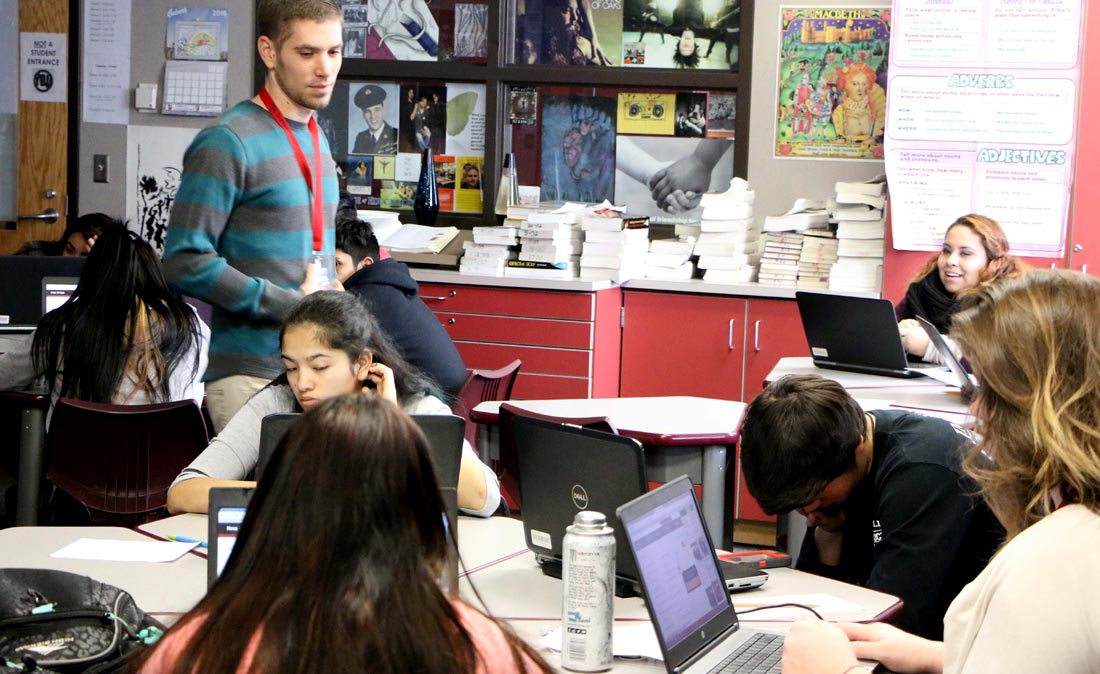 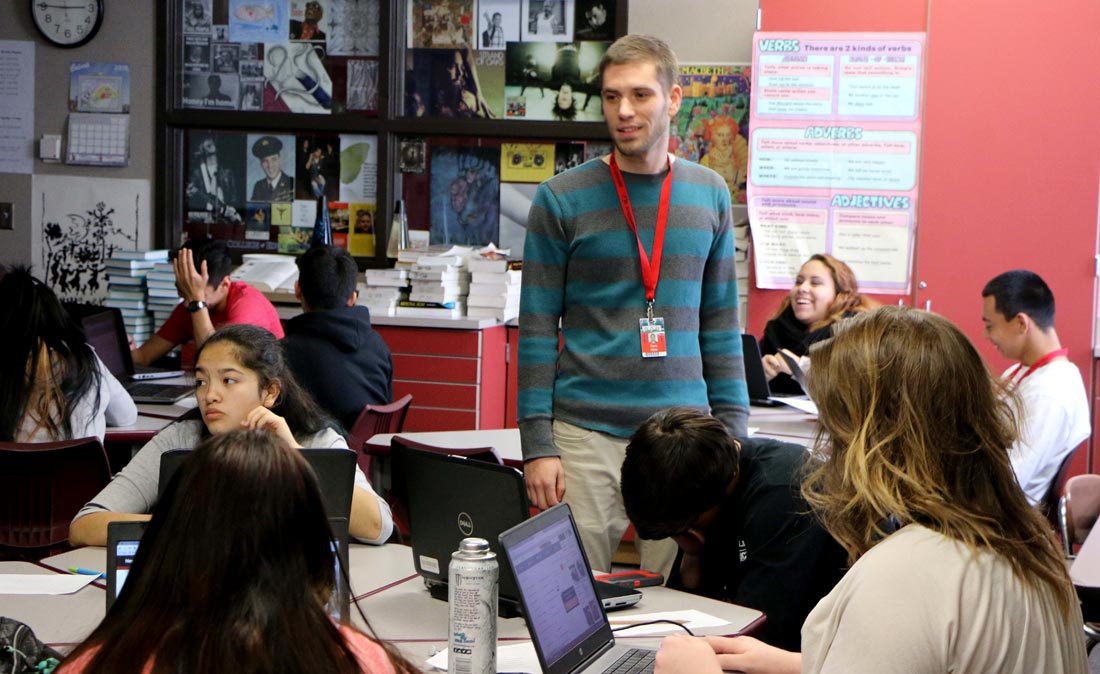 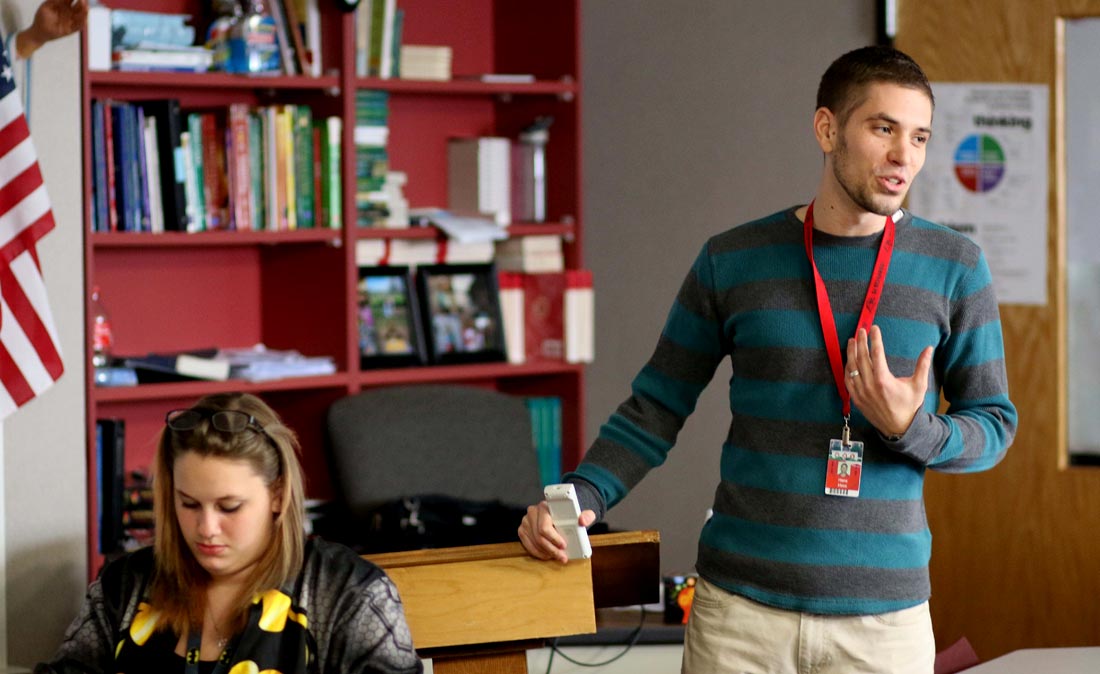 Learning from the students

A challenge for both EL students and educators is time constraints.

“All research shows that it takes five to seven years to learn a language to academic success,” Eberly said. “Well, if the students are starting in the EL program as freshmen, we’re down to just four years. And the state of Indiana only gives them one year to learn the language before they have to start taking all the standardized tests.”

For all the hurdles, though, the EL program offers many rewards.

“The best part of our jobs, I think, is that we have the most rich variety of cultures,” said EL teacher Hans Hess. “That brings in so much opportunity to share and use that in the classroom. I think it makes teaching so much more enjoyable when you can learn so many different pieces from students’ lives and use that.”

Hess is in his first year teaching at GHS. Prior to that, he’d taught in Honduras. Hess said that as a “missionary kid,” he’d lived overseas most of his life.

“Having grown up with different languages, I can just sort of go into that same track as a lot of these students who are just learning English at different phases of life,” Hess said. “In college pretty early on, I realized I had a passion for helping people who’ve sort of experienced what I’ve experienced with moving around, and helping them learn English.”

Hess also said that for the most part, EL students are very motivated to learn.

“Oftentimes, that makes our teaching easy,” he said.

“The biggest plus to it is seeing our students grow in a way I don’t think other teachers get to see their students grow,” Elias added. “I can remember a girl who’s a senior now, and we started teaching her as a freshman; she was quiet as a mouse and spoke no English. And now you see her and her English is fantastic and she’s in all these honors classes. She’s active in sports. You see that with these kids – you see them develop and really assimilate and become really successful. And also we have a lot of students who more than likely, if they go on to college, they’re the first ones in their families to do so.”

Count Marvin and Ruth, both sophomores, as two of the many Goshen High School students who have gained from the EL program.

“I have learned a lot from it,” Marvin said. “When I first started with the program, I didn’t know how to organize my sentences as well.”

“I feel I’ve learned a lot of English,” Ruth said. “It was hard for me at the start. I didn’t speak English two years ago.”

Now, obviously, she does. It’s the type of growth and improvement that impresses Elias.

“I consider myself fluent to a degree, but at the same time I couldn’t do anything near what we ask our students to do,” he said. “For them to be able to come here and take math classes and science classes and read and write in a second language – I think it’s amazing.”

For the EL teachers, student success provides a sense of professional accomplishment.

“I love my job,” Eberly said. “It’s extremely rewarding. When you see students use a word you know you taught them … That’s so fun to know they didn’t know the word last week, and now they’re using it.” 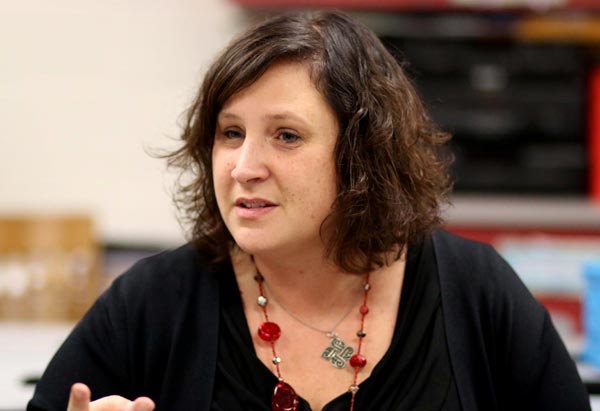 “[My job] is extremely rewarding. When you see students use a word you know you taught them … That’s so fun to know they didn’t know the word last week, and now they’re using it.” 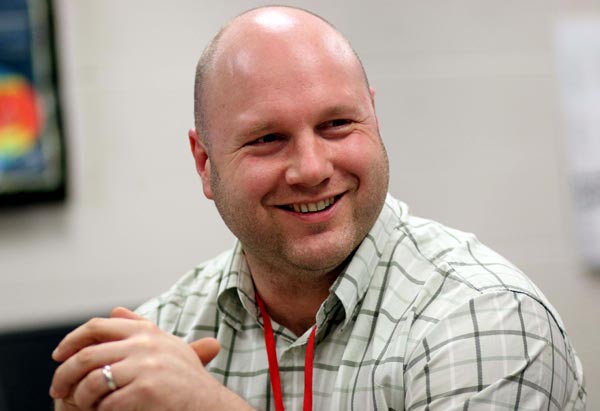 “For [the students] to be able to come here and take math classes and science classes and read and write in a second language – I think it’s amazing.” 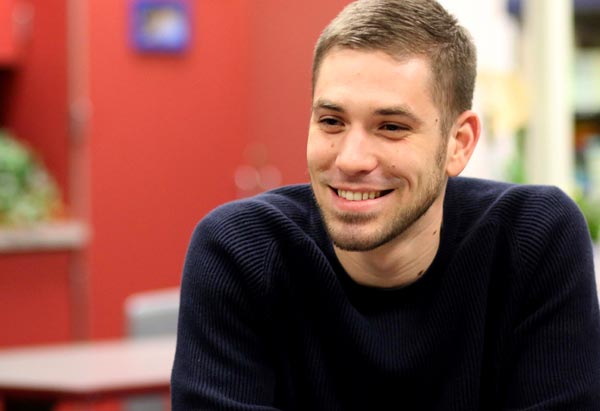 “The best part of our jobs, I think, is that we have the most rich variety of cultures.”