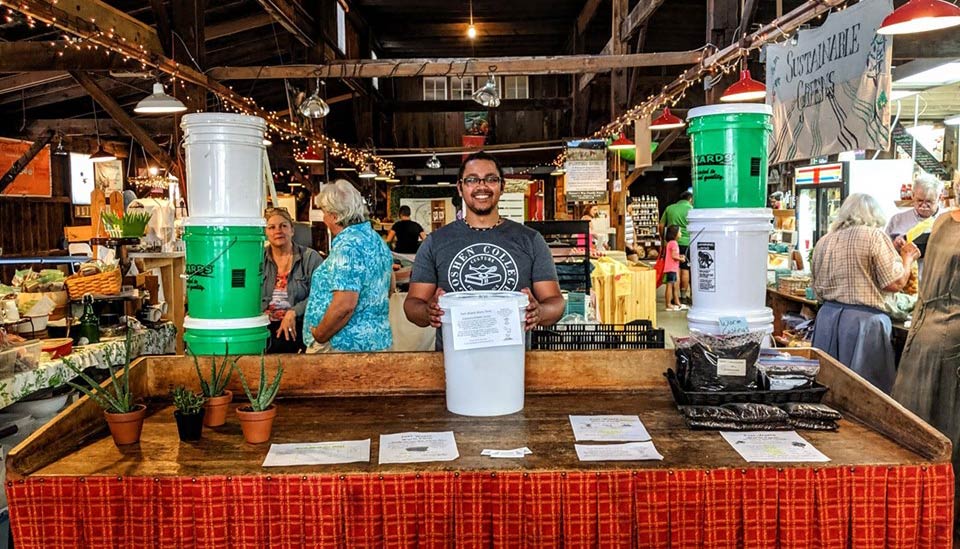 A Good of Goshen story submitted by Matthew Manley

AJ graduated from Goshen College in 2017 with a degree in Peace, Justice, and Conflict Studies. After college, he obtained a position at the Center for Community Justice in Elkhart as a mediation facilitator/case manager. In early 2019, AJ was appointed by Goshen Mayor Jeremy Stutsman as a commissioner on the city’s Community Relations Commission.

Through Post-Waste Worm Farm, AJ runs a composting service using vermicomposting. For a nominal fee, he collects compostable materials for people who want to compost but don’t have the time or space to do it on their own. He collects the compostable materials in 10-gallon buckets – which are able to be exchanged up to once a week – and feeds the material to the worms. The worms then break down the material into “worm castings,” which are used as a soil amendment for flower beds, gardens, and houseplants.

Post-Waste Worm Farm was founded with the vision of diverting food waste from the landfill, and since last year has diverted more than 1,000 pounds of compostable material. While the program is expanding, thus far it has been a one-man operation. AJ’s passion for justice is a driving force in the growth of the composting service.

AJ operates out of the Goshen Farmers Market, where he collects the compost buckets and sells the worm castings. The service is economical, environmentally sound, and helps Goshen be a more sustainable community.