Lightbox • The Good of Goshen 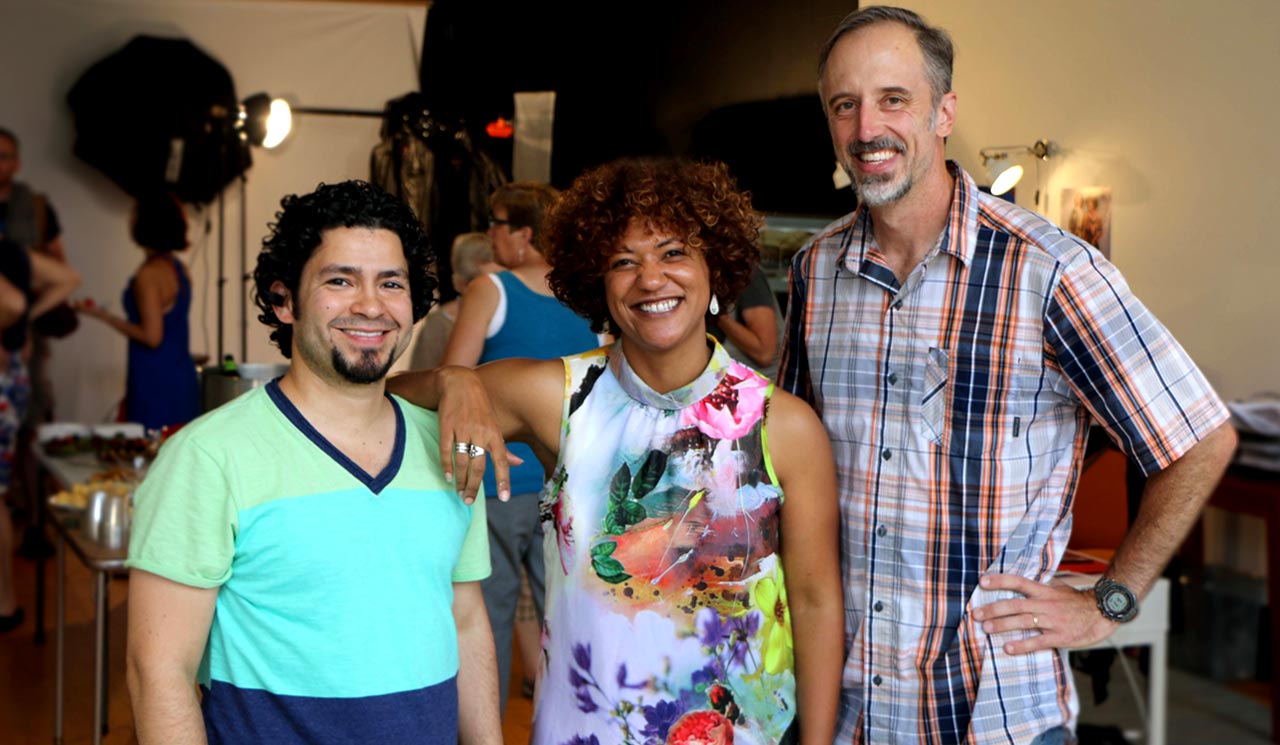 LightBox, a new co-working studio overlooking Goshen’s bustling Main Street, is aptly named. Not just because the newly renovated historic space is painted brilliant white, or due to the sunlight cascading in from the lofty cathedral windows. More so, because the people who work there are all remarkably bright.

Rafael Barahona (Goshen College ‘01) is a self-taught graphic designer and founder of R3 Design, a graphic and web design company that specializes in logo creation, branding, and marketing. He’s lived in Goshen on and off since he was a freshman in high school, when he moved with his family from Calgary, Alberta.

Anne H. Berry (Goshen College ‘99) is a graphic design professor at Notre Dame. When she’s not teaching, she operates a well-established graphic design business. Anne is a Goshenite through-and-through; she was born at Goshen General Hospital, attended Bethany Christian High School, is a Goshen College alum and former professor, and is a current Goshen resident.

Stuart Meade is a successful photographer, and self-described “tech-geek,” is the founder and CEO of Stuart Meade Photography. He specializes in aerial photography, portraiture, and landscapes, with a national client base. He moved to Goshen in the early ‘90s after graduating from Ball State in Muncie, Ind. He and his wife Julia King have been active in the community for years.

The artists all operate their businesses with an office (and, in Stuart’s case, a fully functioning portrait studio) in LightBox’s headquarters, located above Gateway Cellar Winery in downtown Goshen. The atmosphere is light and informal. It’s an open office plan, encouraging conversation and collaboration — perfect for three highly creative professionals.

When I walked into the studio to interview the group, ‘80s pop was playing at a reasonable volume, but louder than your typical office-music decibel. Anne was working on her computer from the chenille couch, spread out comfortably on her stomach, legs kicking in the air. Rafael walked over to shake my hand, offering me a choice of water, La Croix, or craft beer.

The three artists exchanged easy, lighthearted conversation as I set up for the interview. It’s hard to imagine now, but as we started to talk I learned that all three artists were somewhat ambivalent about living and working in Goshen before settling into their new downtown digs.

All three had at some point felt — like many small-town artists do — the need to move to a larger city for more creative freedom. After graduating from Goshen College, Anne moved to Denver, Colo., where she lived for three years, then went on to get her M.F.A. from Kent State. She moved back to Goshen, and was later hired to teach graphic design at Goshen College. Rafael moved to Charlottesville, Va. with his wife Elisabeth for six years where he worked in administration at the University of Virginia and Elisabeth worked towards a Master’s in Social Work. They moved back to Goshen to raise their children closer to family. Stuart moved to Goshen to start a job after graduating from Ball State, in Muncie, Indiana.

None of them intended to stay for long. Rafael told me he and Elisabeth had set a “three-to-five year limit” on their move here.

“But I don’t think about that anymore,” said Rafael.

It’s easy to see why. LightBox is a dream-come-true kind of workplace, smack dab in the center of an increasingly artistic downtown.

“We all stayed here because Goshen keeps getting better and better,” said Stuart. “We wouldn’t be here if it weren’t a great place for artists.” 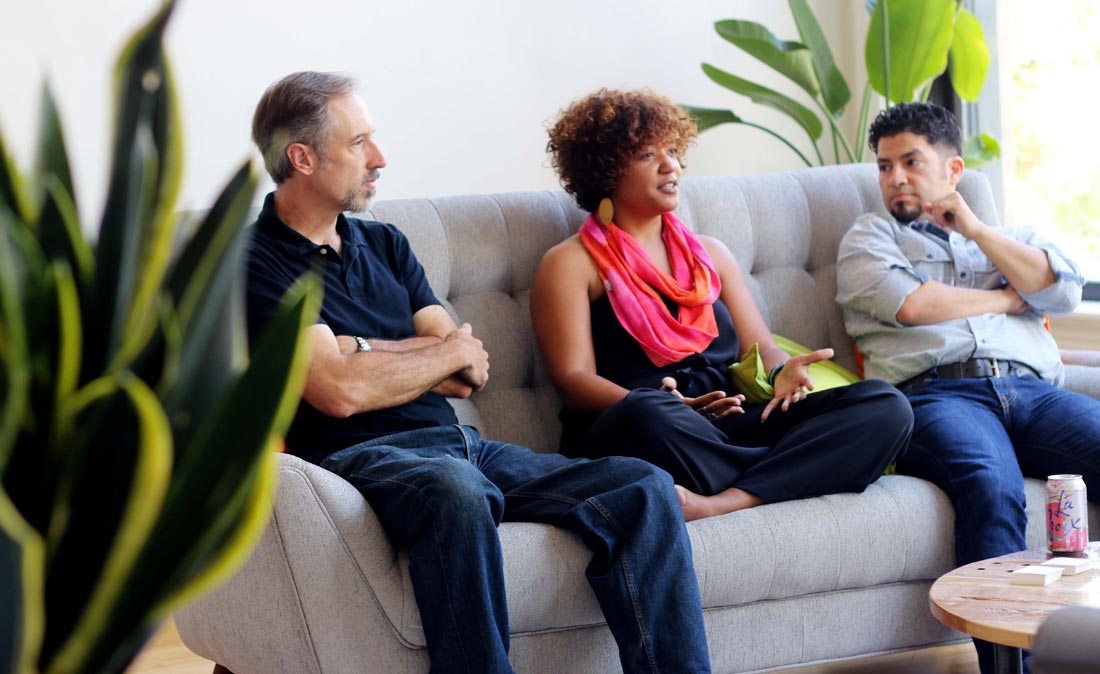 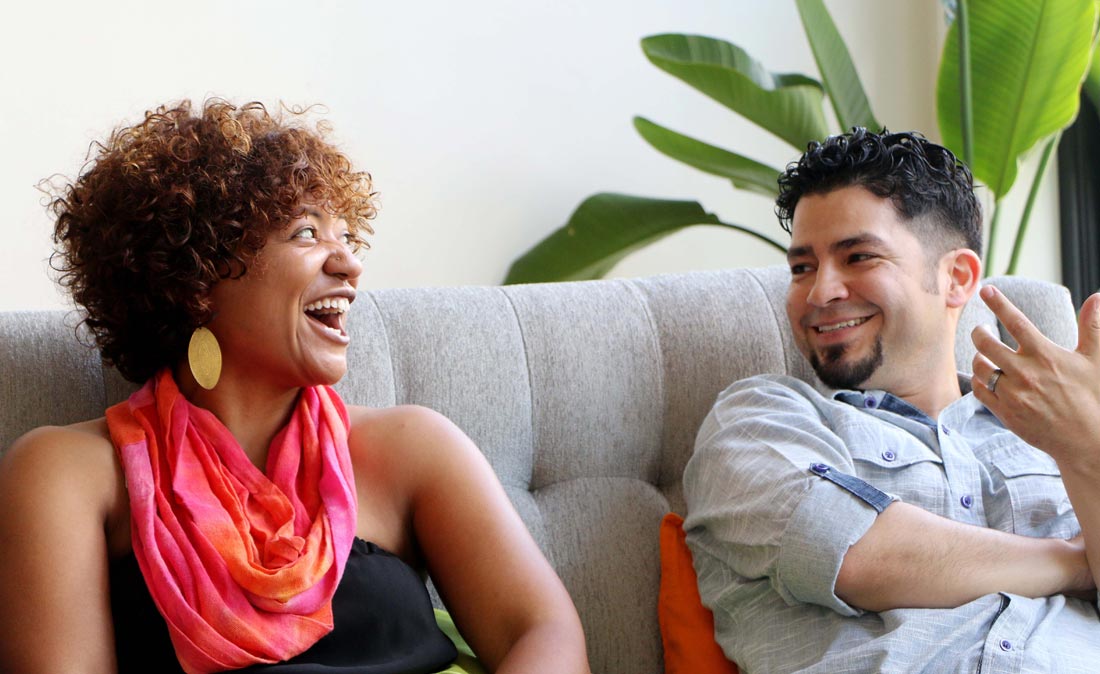 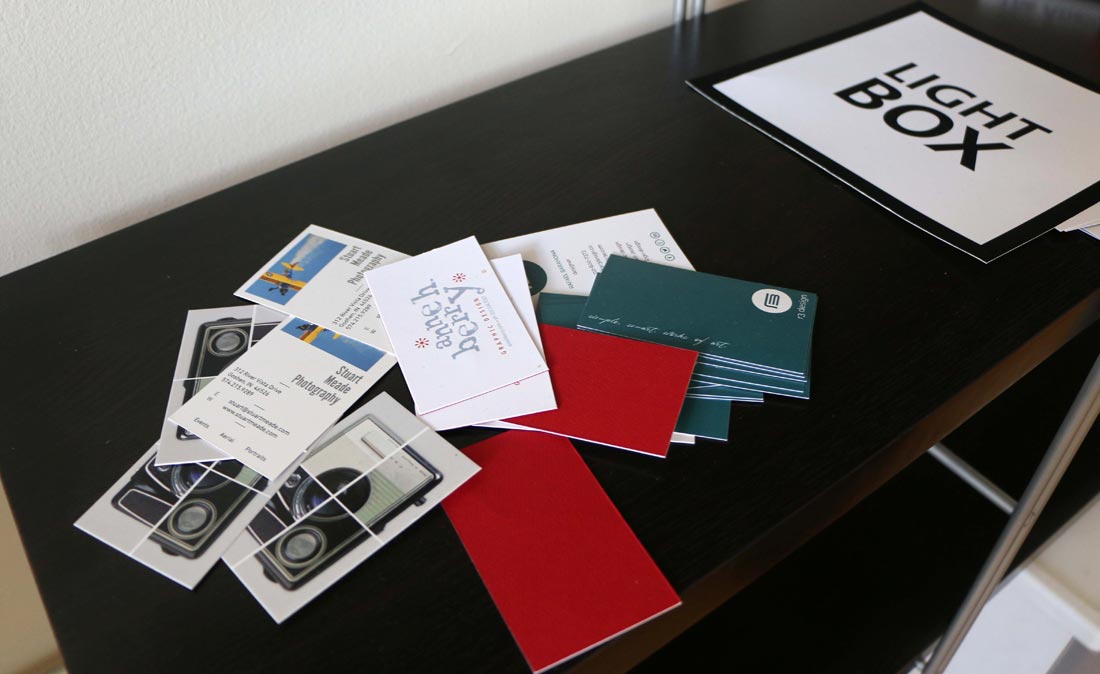 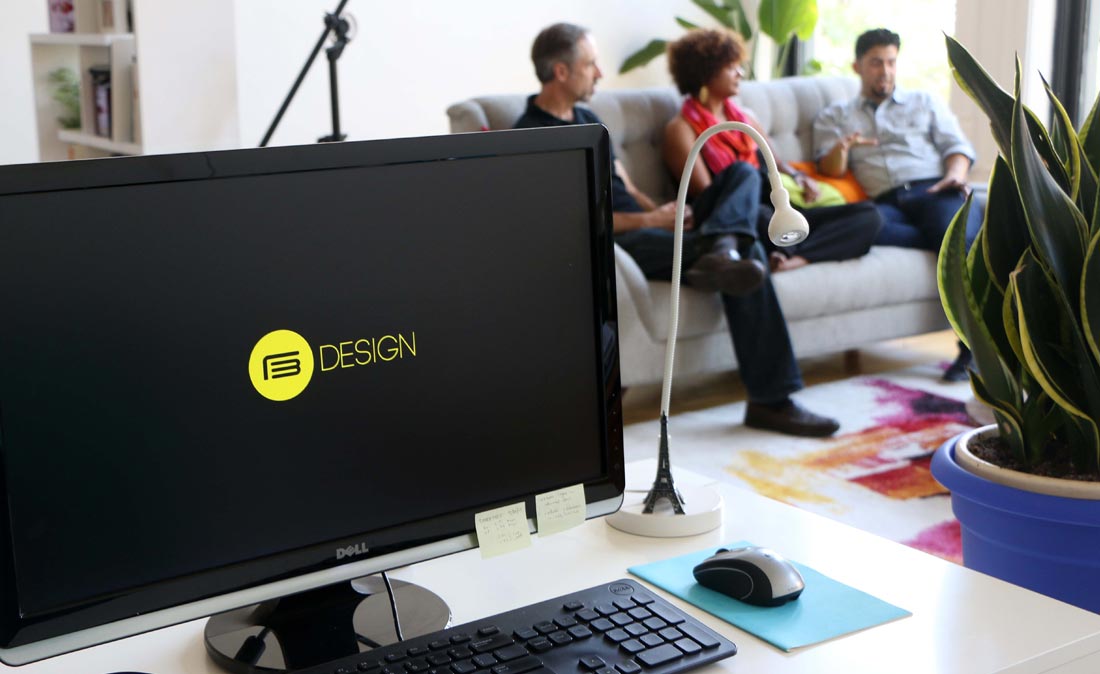 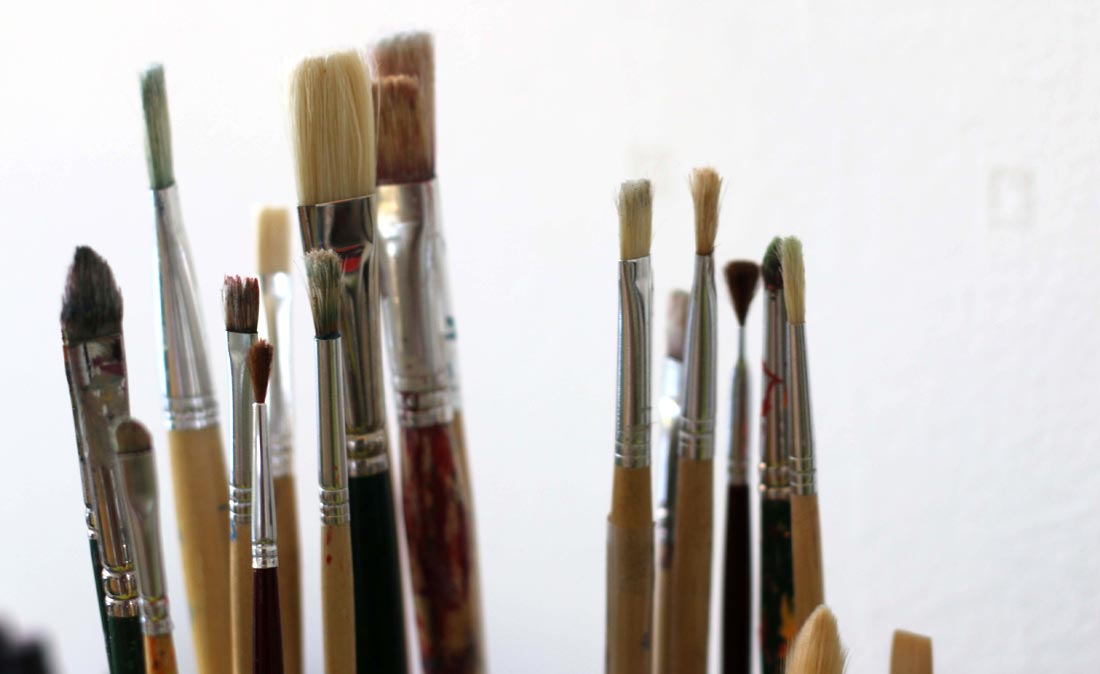 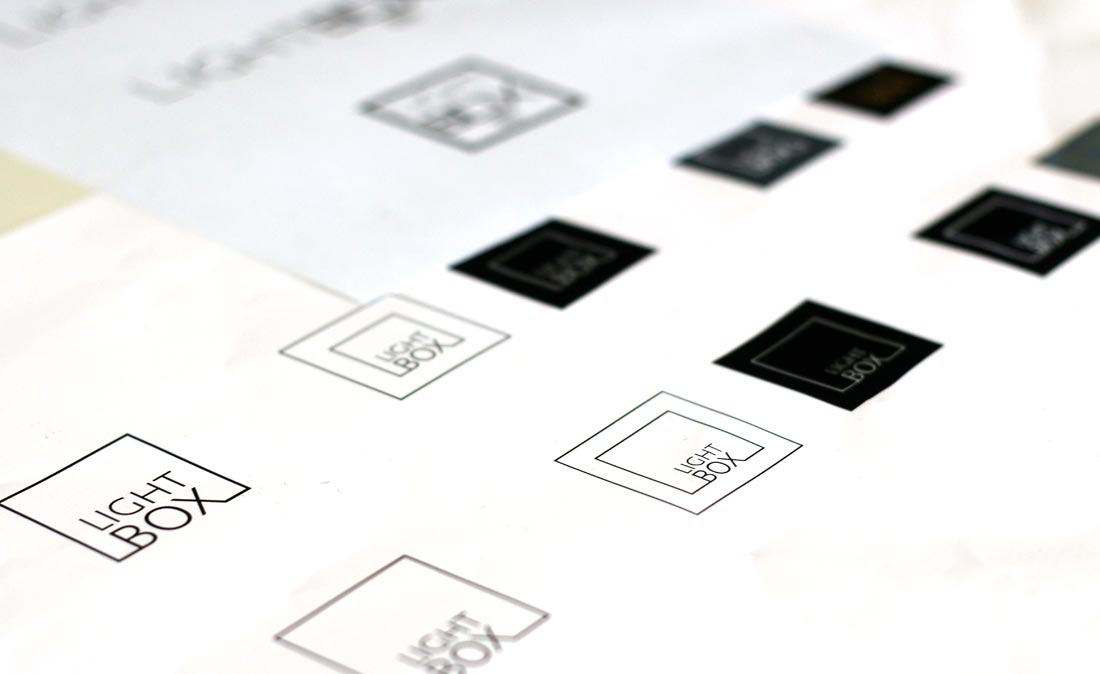 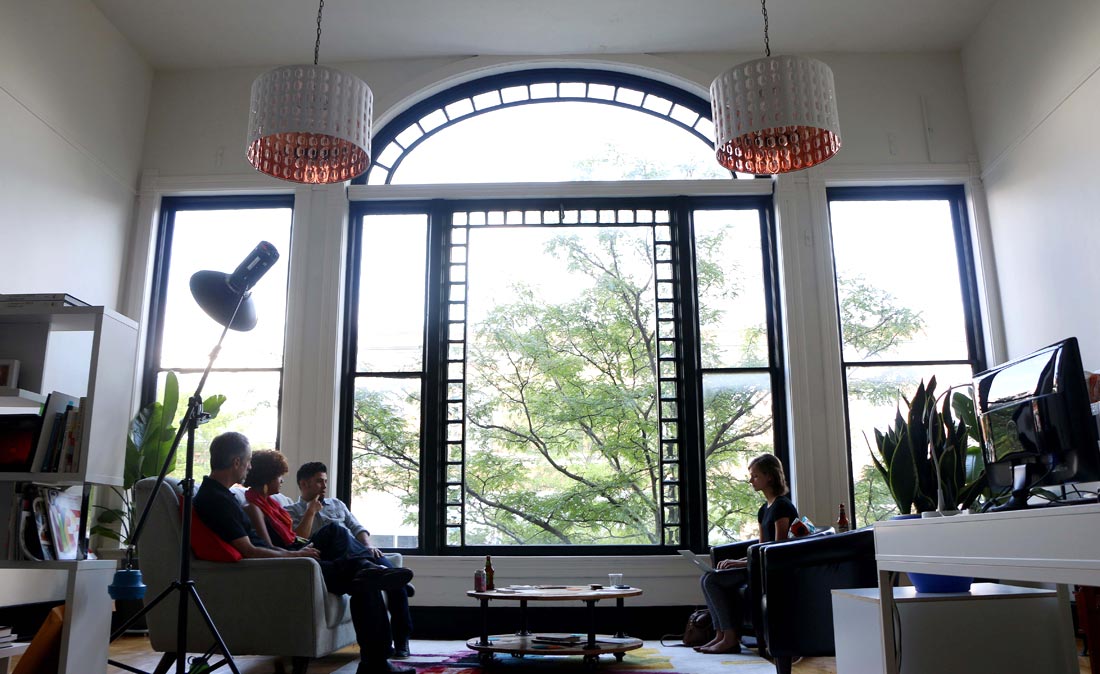 Stuart and Anne tell me that they credit Rafael for inspiring their move to the LightBox studio space. He is, they say, the reason LightBox exists. Rafael, though, says that the idea for LightBox was born during his time managing his graphic design business out of Launchpad, a shared office space for startups. Started by the Goshen Chamber of Commerce in 2012 and located above the Chamber building in downtown Goshen, Launchpad gives small business owners a place to work both individually and collaboratively with other entrepreneurs. It was there that Rafael’s business started to bloom, he began to meet more artists, and formulating his own recipe for individual success.

In early 2015, Rafael was visiting friends and fellow artists, David and Carrie Lee Bland-Kendall, in their studio above Gateway Cellar Winery, when Carrie Lee showed him a large empty room next door with giant cathedral windows and whitewashed walls.

He fell in love with the space and, congruently, fell in love the idea of managing a workplace of his own. But the room was too large for just him. Renting it out would require more people. But not just any people — other artists.

“I knew that if I could find one or two people who would be interested in sharing the space,” said Rafael, “it could become feasible.”

In the winter of 2014, Rafael sent out messages to local artists to scope out interest. Soon after, he received an inquiry from Anne.

“What appealed to me was the freedom to maintain a space to do work and research away from my office at Notre Dame,” said Anne. “Sometimes my colleagues ask why I don’t live and have my business in South Bend. But I don’t mind the commute most of the time. I like being here, it’s easy to get connected.”

Stuart’s entrance into the LightBox team was more serendipitous. Rafael and Stuart met when Stuart commissioned R3 to design his business’ new logo. During an initial meeting, Stuart mentioned that he was currently operating from home, but was looking for studio space. To which Rafael replied with a smile, “We’ll talk about that in a minute.”

By the spring of 2015, the three artists had already received the OK from building owner David Pottinger to make renovations. By June, they had moved in. By July, they were hosting open houses and inviting friends and fellow artists to come up, enjoy some tunes, and let the creativity flow.

Creating an inviting space was actually part of their professional strategy, Rafael told me, because “having other artists to ask for critique is a great resource.”

Not only is the space itself conducive to creativity, the downtown location gives the artists a chance to get to know fellow entrepreneurs and interact with people in the heart of downtown Goshen.

“I’ve always wanted to work in a place like this,” said Stuart. “It’s fun to me to walk down to JoJo’s Pretzels, or grab lunch at Maple City Market or the Electric Brew. It seems obvious, but it’s such a treat to have these places to accessible. It’s just pure fun.”

From the second-floor location, the group feels involved while also being productive. “You feel part of downtown,” said Anne. “But you can still get work done.”

Since all three artists have a long history living and working in Goshen, they’ve seen many changes over the years. Now more than ever, they tell me, the community encourages artistic entrepreneurship.

“It’s a place of opportunity,” said Rafael. “I couldn’t do what I’m doing if I were in a big city like Chicago. I would not be in the position I’m in.”

“In Goshen, we sit in this really great pocket of small town opportunity and new things happening,” he continued. “It’s an exciting time to be here.” 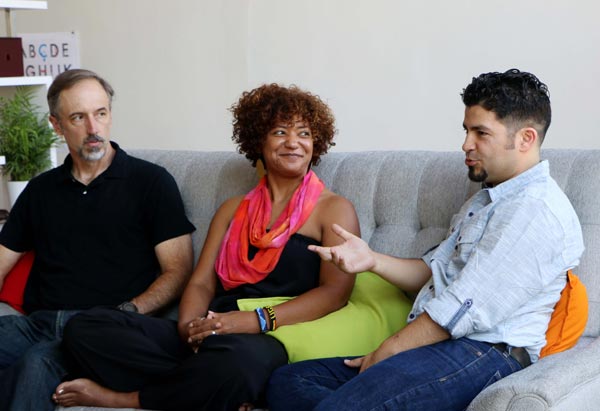 “It’s an exciting time to be here.” 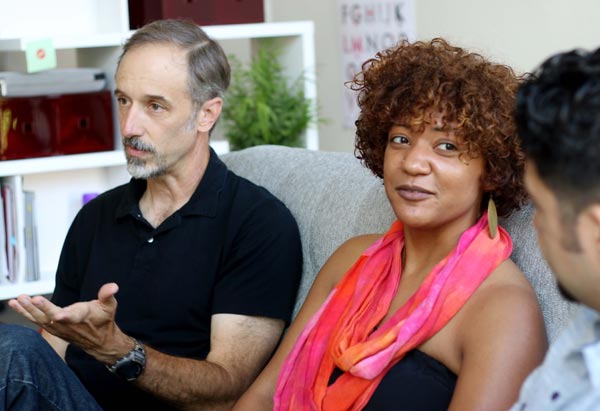 “We all stayed here because Goshen keeps getting better and better.” 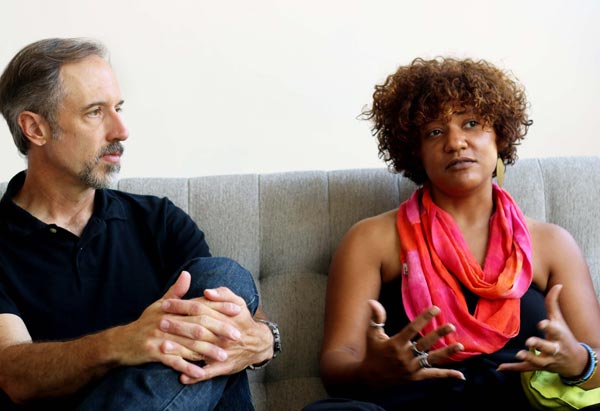 “You feel part of downtown, but still get work done.”