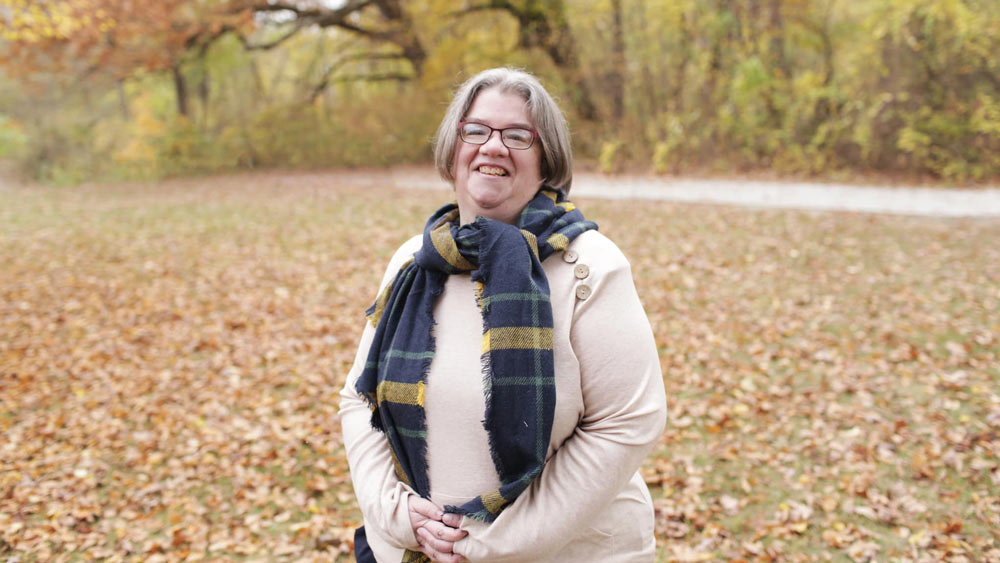 “We didn’t even realize how much she impacted people’s lives until hundreds of people started reaching out to us after she died. Like the bus driver at Martin’s or this jar full of notes.”

Charity Boyd sets a large jar on the South Side Soda Shop table. It is full of colorful notes written by people sharing special memories about Ashley.

“I can’t even read these yet. I miss her too much, and it’s just too hard.”

Charity swallows, brushes away a tear, and then she and Nick slowly continue with Ashley’s story, which has become a large part of their family story, especially for the last eight years.

“Ashley’s mom died unexpectedly in 2013. Ashley had already been a part of our lives in Goshen for a long time. Her brothers lived in Florida, so we stepped in to become her guardians when her mom died. Ash moved in with us, and we created a job at the South Side Soda Shop for her. We wanted to give her a job and a little exercise. She cleaned and made crafts that she sold. Most importantly, she brought a lot of delight to our customers and us.

Overall, people responded well and looked out for her. If they saw she did something that needed attention, they’d quietly mention it to us, and we could take care of it with her. Besides Anita Schrock, Ashley had the most tenure of any employee we’ve ever had. 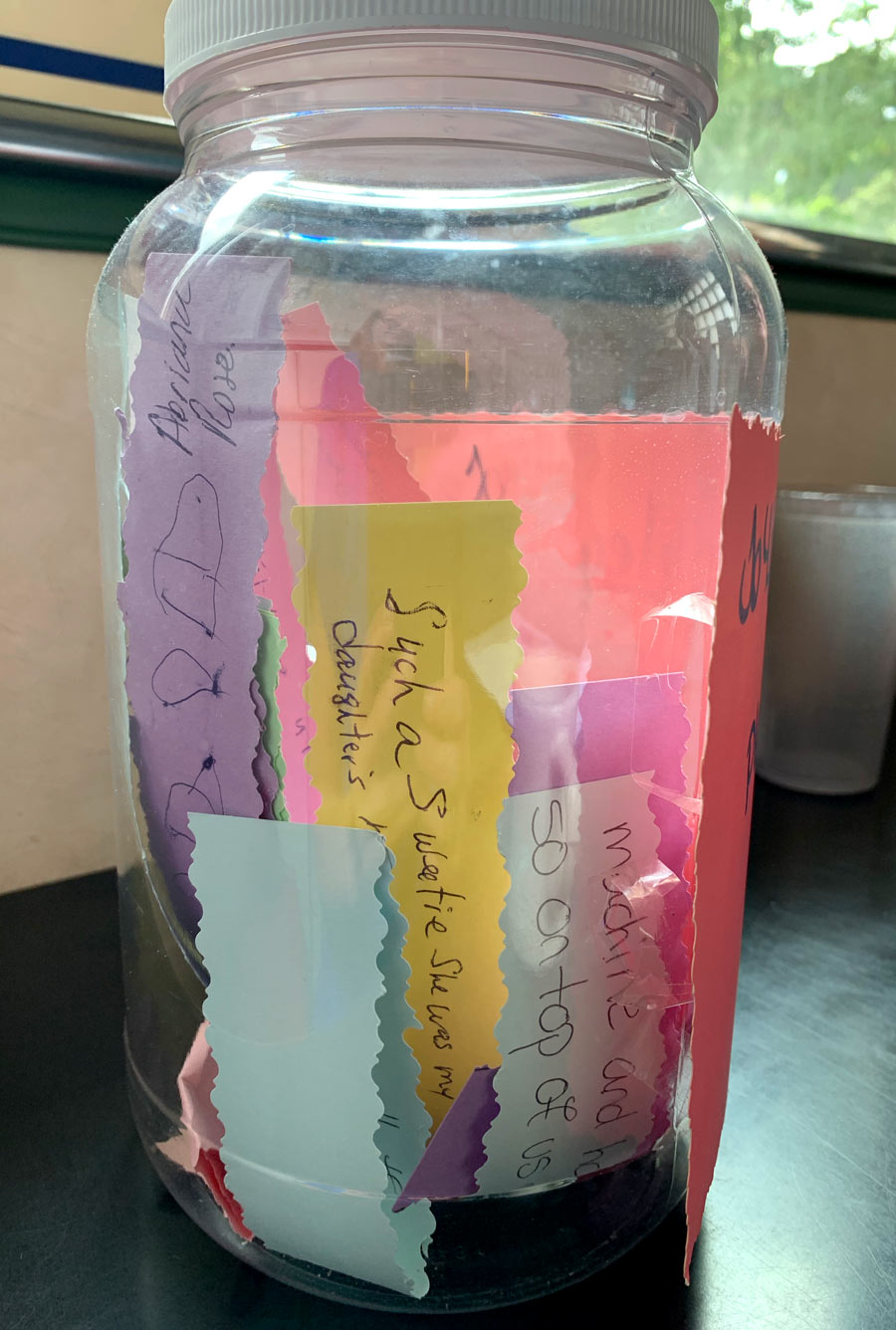 Ashley’s Side Hustle: Queen of Crafts

Ashley loved making and selling crafts. She had sooooooooo many crafting supplies. We’re now set for life with washers, magnets, and stamps. She had a lot of gift cards for Michael’s, so we’re set there, too. But she spent so much money on crafts that many of those gift cards only have 20 cents left on them, so we won’t get very far with those.

When she sold her crafts, she set the prices high, which confused some people. They’d say, “You want $10 for this little bracelet?” They would hold one up. But a lot of people bought things because they cared about Ashley. It made her so incredibly happy when someone bought her art. She would check her craft box at the Soda Shop dozens of times a day during her four-hour shift to see if anyone bought something.

Ashley had lived a sheltered life, protected from the world by her very cautious but loving mom. When Ashley was born, she was diagnosed with Prader-Willi syndrome. At that time, the prognosis for these kids was not great. People with this condition can have average intelligence in some areas but a lot of challenges in others. For example, Ashley had a photographic memory and graduated from high school, but she could not safely cross the street. As a kid, Ashley learned to ask permission for almost everything: what she ate, bought, or did. We worked hard to give her as much freedom as possible when she lived with us. She was 41 by that time.

Growing Up and Moving Out

It wasn’t long after we became her guardians that we realized Ashley needed more support than we could provide for her while we were working. As restaurant owners, we work long hours. She would just sit for hours if we couldn’t give her guidance. That wasn’t good for her. Her brothers called us, and we talked about looking at other options in the community to support her. We researched everything in the area and really liked the assisted living options at Goldenrod.

We had so many conflicting feelings and reservations about her moving out, though. We didn’t even know how to present the idea to her. We didn’t want Ashley to feel abandoned by us so soon after losing her mother. We wanted her to have the right amount of supervision and be independent. What we didn’t realize was just how much Ashley wanted and needed to be independent from us.

We took Ashley to visit Goldenrod. At the end of the tour, we met with the staff. It was so emotional; we couldn’t even say the words to ask Ashley if she might want to live there. One of the staff members, thank goodness, picked up on this and posed the question to Ashley,

Ashley got so excited and turned to us, “Oh, I would LOVE to!!! Can I, Aunt Charity and Uncle Nick?!?”

And that was it. We were so relieved because living more independently was something Ashley wanted. We didn’t even know it.

Ashley’s time at Goldenrod brought a lot of growth for her. She continued to come to the Soda Shop, but instead of open to close, it was just from 11 – 1:30, which was better for her and us.

Of course, we stayed connected. Ashley called us each night to recount her daily activities. We would FaceTime while listening to Delilah every day before she went to bed.

Ashley quickly made friends at Goldenrod, especially Marianne. They both liked dolls with “flicky” eyes (eyelids that flick open and close). They named the many dolls in their combined collection.

Ashley was incredibly proud of the fact that she graduated from high school. She was the first of her siblings to accomplish this.

One of her many achievements was doing research online. She would make to-do lists, identify names and addresses and memorize information about people who were important in her life. She remembered friends’ birthdays and would call or send messages. She even found a teacher she had years before and reached out to her to start writing back and forth. She loved to send handwritten letters, and nothing made her happier than getting a letter in return. 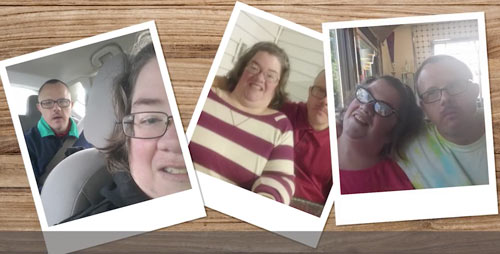 See the ADEC video honoring Ashley’s courage in the face of tragedy.

As Ashley gained independence, her outgoing personality grew even more. She wasn’t embarrassed to admit that she had a thing for cute boys. She loved spending time with her friends and hated to see social time come to a close. To make sure the good times didn’t come to an end too soon, she sometimes hid the clocks in the house.

Ché Hines was Ashley’s special person. Besides spending time together at ADEC’s day program, Ashley and Ché would go on double dates with Nicole, and her husband, Justin. Sadly, Ché died unexpectedly in 2018 after suffering a fatal fall shortly before he and Ashley were to attend a special Gala event. Ashley was devastated, but Hannah stepped in to accompany Ashley to the event in Ché’s absence. ADEC honored Ashley’s courage in the face of such tragedy by making a video about her and Ché. 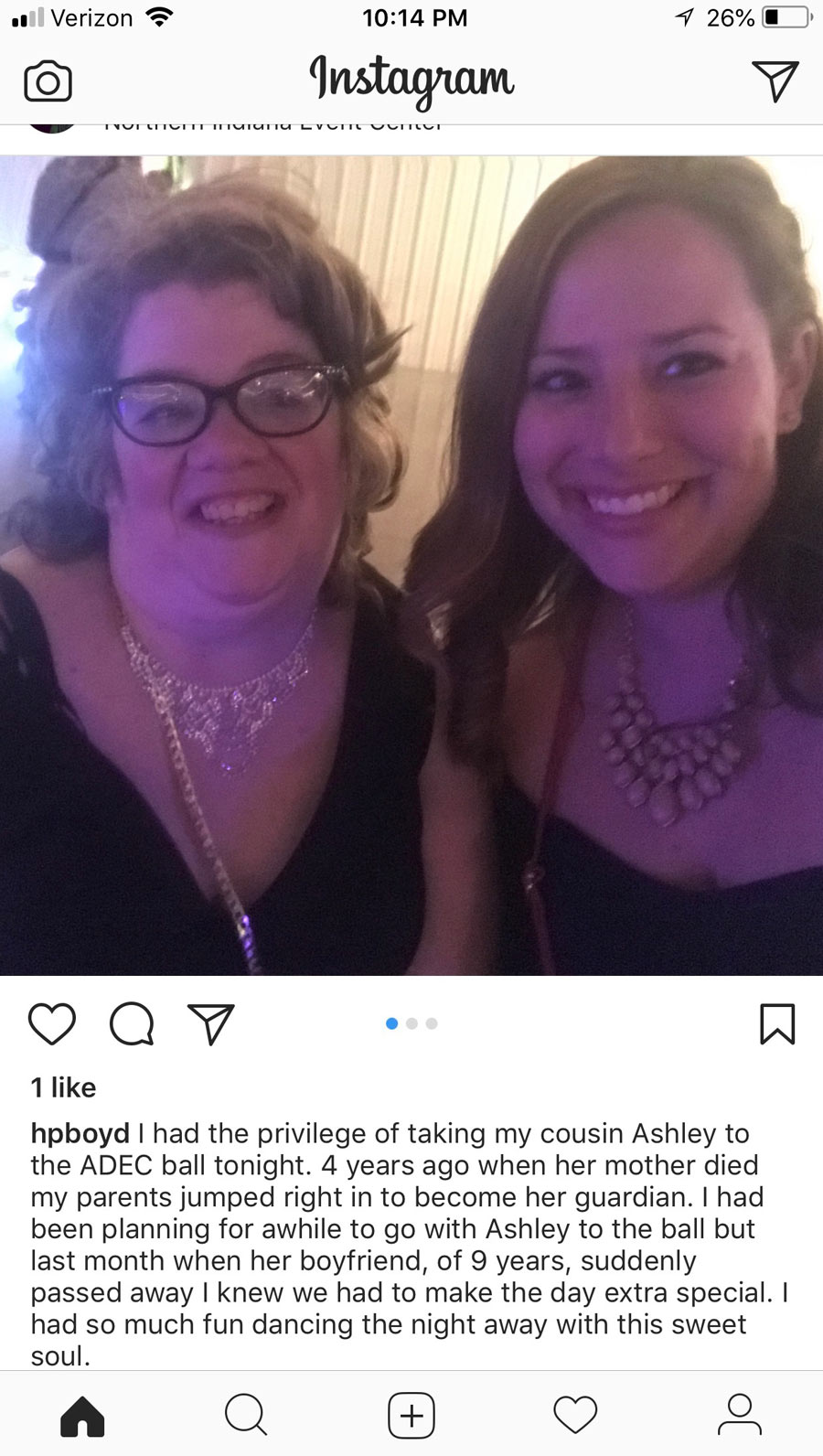 Ashley processed grief in a more open way than many of us do. Her emotions would spontaneously come to the surface, and she didn’t try to hide them. She could start crying or laughing at a memory of her mother, father, or Ché at any moment.

When Ashley was upset, she also let it show. When she was performing with the Shalom Ringers bell choir at church, one of the very kind directors encouraged her to exit the stage when she lingered too long. She rolled her eyes and – in front of the congregation – snorted, “Get a life.”

We were mortified. She seemed pleased with herself.

Queen of the Cruise

We took Ashley on a family cruise vacation, and we’ve never had such an enjoyable adventure. One of the activities was nightly trivia. With Ashley’s photographic memory and love of Delilah, she crushed the competition at music trivia. She could hear two notes of a song and identify it, so she kept winning night after night until crowds started to gather to cheer her on. People would even try to argue with her about the song, but she’d be right. When we were returning home from our trip, strangers at the airport who were on the cruise greeted us and congratulated Ashley.

It wasn’t just her memory that made her famous, though. She also led the ship’s conga line and sang karaoke with total abandon. Ashley’s enthusiasm drew others to her. By being herself, she permitted others to do the same. 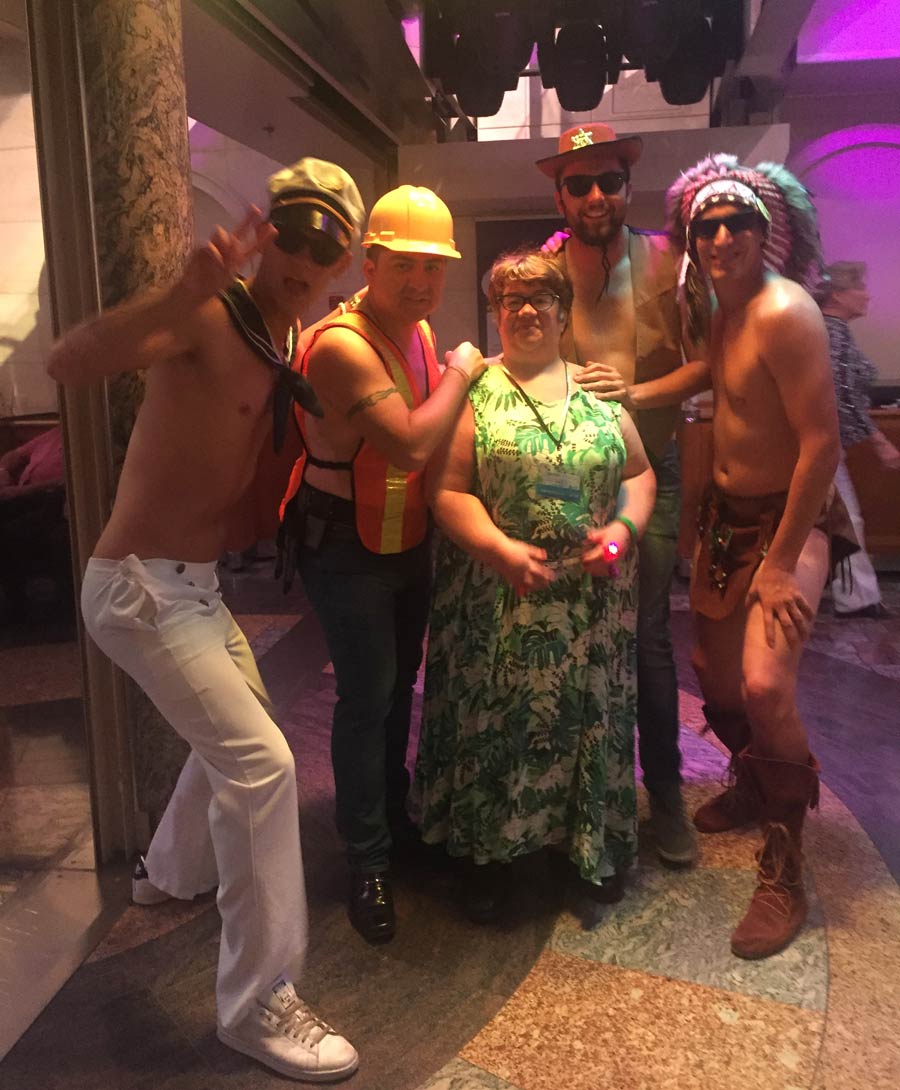 Ashley’s enthusiasm drew others to her. By being herself, she permitted others to do the same. 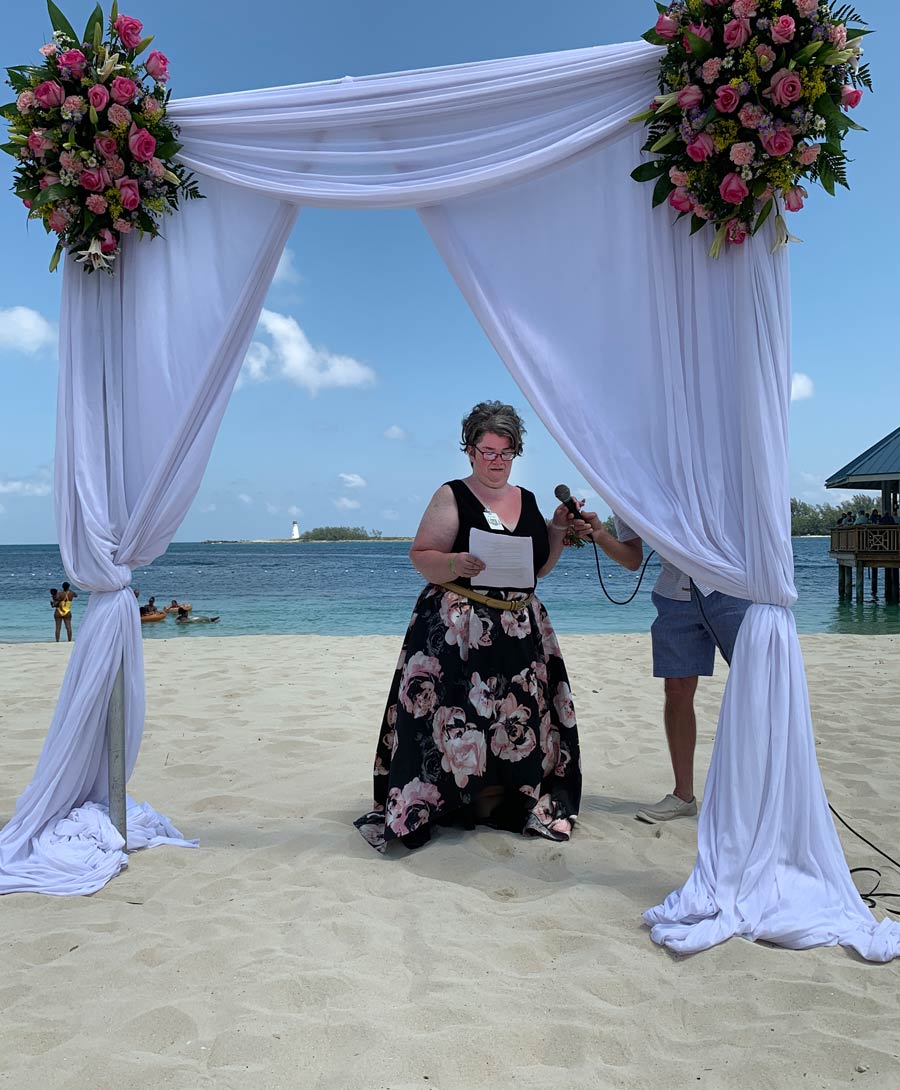 Ashley’s brother wanted her to be a part of his wedding – but not as a bridesmaid. He asked her to officiate. So we went online and registered her to become an ordained minister.

Nick worked with her and wrote the ceremony. From there, Ashley set to work, memorizing the entire ceremony so she could lead it by heart – and she did.

Ashley was a frequent contributor to the Good of Goshen. The Good of Goshen welcomes people to submit stories about community members who reflect the best aspects of our community contributions to the greater good. Ashley submitted stories in 2015 (Why I Love Goshen), 2016 (Tinsley Yoder, Ashley Van Vurst, and Jenni Samuel), and 2019 (Glad to be Part of the Goshen Community).

When the pandemic hit the Soda Shop shut down. Ashley couldn’t come to work. She went to the Shoots each day, and she seemed to take it in stride. She continued to create and make art there. The facility where she lived ended up being locked down a few times, which was hard for her and us.

We got a call from Ashley’s caregivers at Goldenrod on January 2, 2021. They found her unresponsive in her bed after a nap. We raced from the Soda Shop to her house just a few blocks away, but…she was already gone. She had a heart attack. We were completely shocked. Ashley was just 49 years old. We had just spoken with her the night before and FaceTimed Delilah.

It’s still so hard to talk about it. Because of the pandemic, we haven’t been able to have a funeral or a gathering for her memorial. Grieving is hard – but especially in these times.

Even so, we are so grateful for the notes from others who have reached out, the memories we have, and this jar. It’s just important to remember what a blessing she was to our family and how she touched so many people. It helps us grieve her loss.

She was just a blessing to us. And, it seems like, to a lot of other people, too.

— Nick and Charity Boyd, Ashley’s aunt and uncle and owners of the South Side Soda Shop 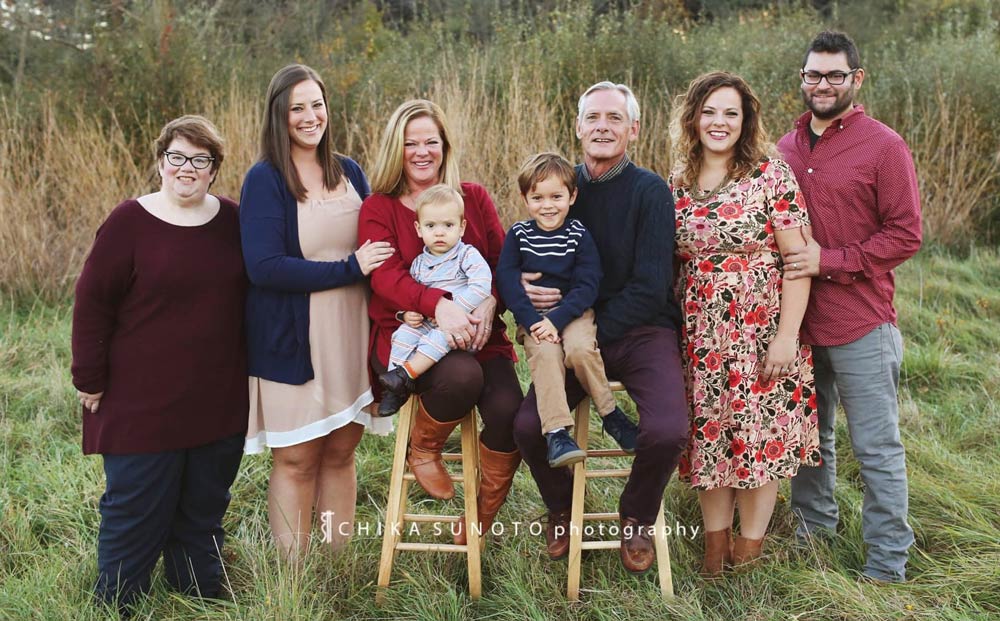