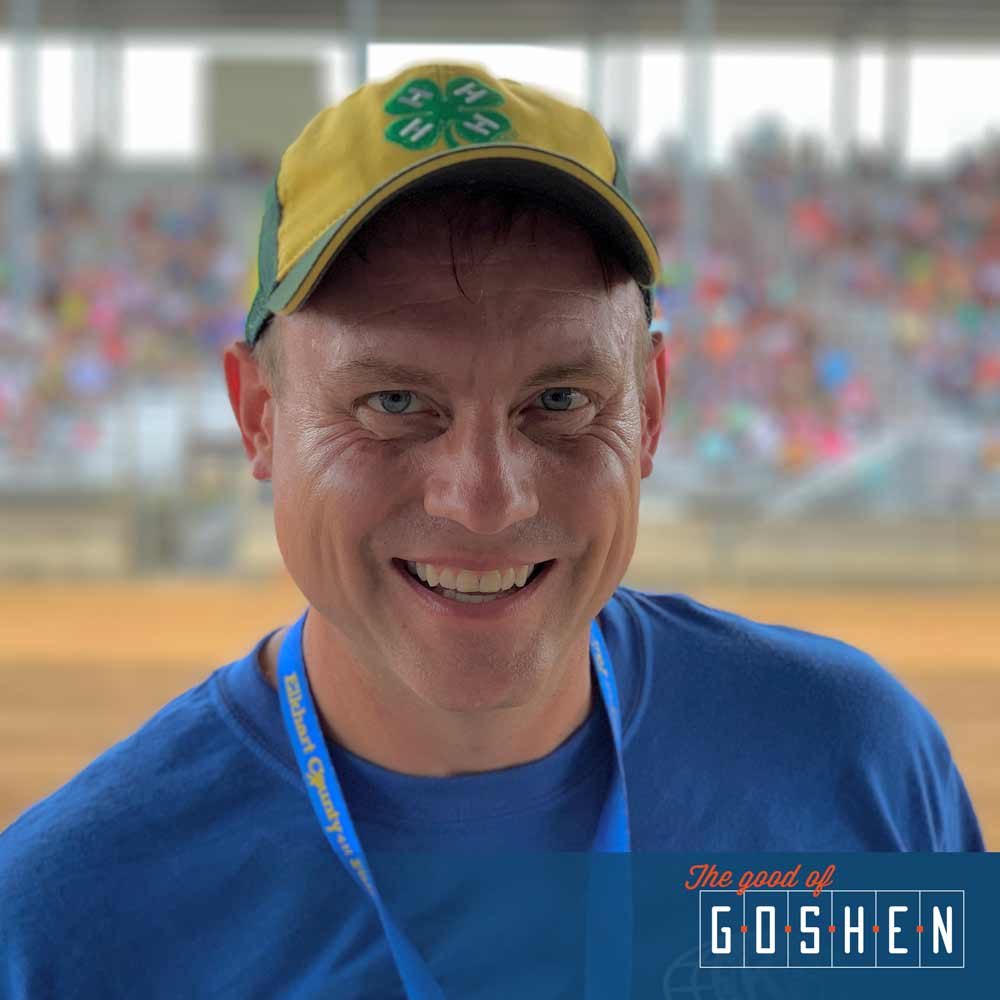 I married my college sweetheart. I went to Grace College in Winona Lake, and I married a Middlebury girl. And I learned marital compromise early. I grew up in Cincinnati, she grew up in Middlebury, and she told me that Goshen was exactly halfway. True story. So I married into Goshen. I’m a transplant.

I own a business called TechKnowledgey. Businesses that are big enough to need tech people around but small enough they don’t have their own IT department contract with my company, and we take care of their IT services for them.

For fun, I fly. I enjoy flying with the Civil Air Patrol. I do a lot of service, do a lot of traveling. Also, raising my family. My kids are 10, 13, and 16 right now, a son and two daughters.

This is my 16th year as the Elkhart County 4H Fair Parade director. I got involved through Kiwanis. The Goshen Noon Kiwanis has sponsored the parade for longer than I’ve been alive – best I can tell, about 50 years. This was going to be my last year doing the parade, but my successor had an accident this morning (parade day, July 21) and went to the emergency room with a broken arm. So I’ll be doing it again next year to make sure we have a good transition to a new leadership in the future.

With the parade, you have to have the right mix. Because the parade is basically a line: Somebody has to know who’s first in line, somebody has to know what’s last in line, and everything in between. You have to have everybody show up to stage on that little piece of parking lot; you’ve got a lot of people to put there. So you’ve got to be really accurate in putting it together. But at the same time, you’ve got to be really loose and really flexible. Everybody’s a volunteer. Everybody’s from the public. Somebody’s going to mark down “truck” and bring a semi-truck instead of a pickup truck. So you have to be accurate, but you’ve got to leave a lot of flex in the system. The right mix of that gives you a good parade.

I love Goshen Municipal Airport. I love Dandino’s. My kids always like to go to Southside Soda Shop. Goshen Noon Kiwanis is always a good time. Goshen is definitely home. I’ve fully assimilated at this point.

People in Goshen still learn how to get along. We’ll have our disagreements, we’ll have our differences from time to time, but at the end of the day I think the people of Goshen do a really good job being neighbors – taking care of things and maintaining a good town.