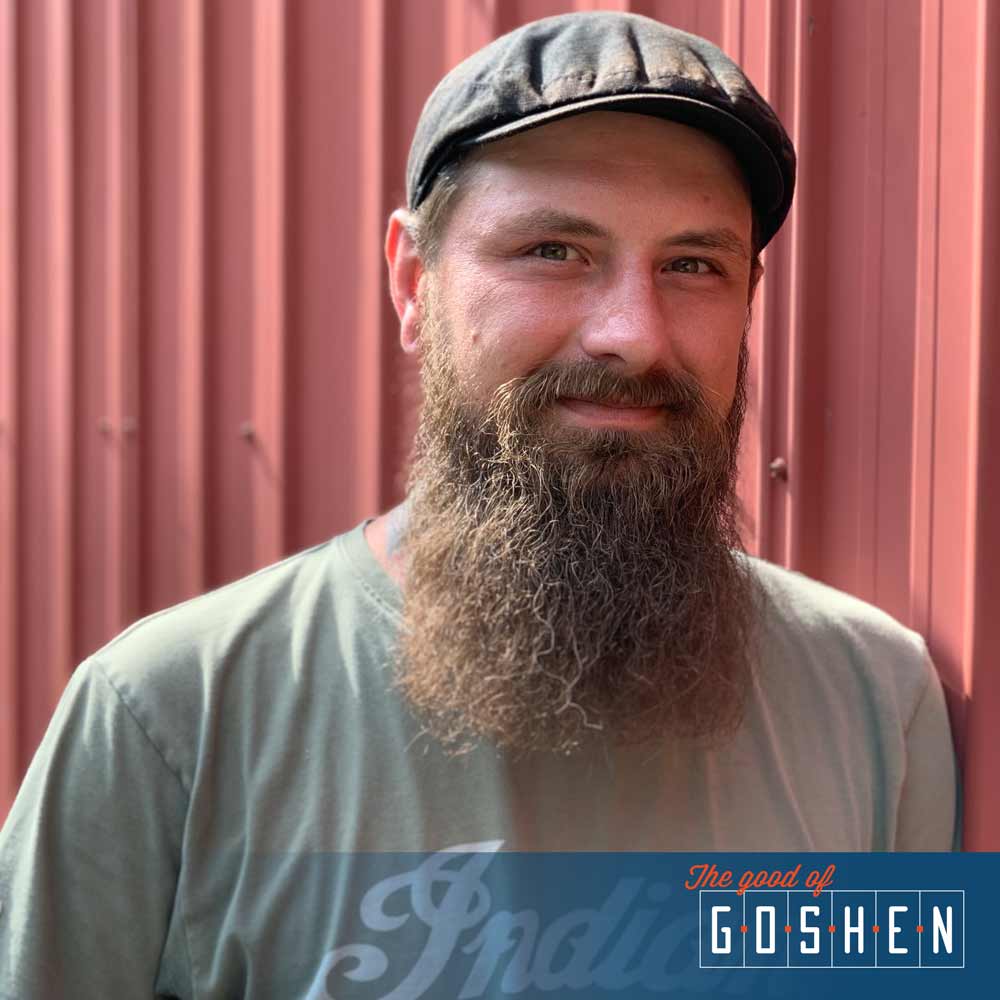 I’ve had chances to move, and what keeps me here is the community. It’s a true melting pot. I’ve never once set foot in any place in Goshen where I’ve felt unsafe. Almost every store you walk into, they treat you like family. It’s the community.

The entirety of the rest of my family was born in East Liverpool, Ohio. My parents moved here shortly after my sister was born, and I was born here. We moved back to East Liverpool, and then moved back here again when I was 5 or 6. I’ve been here ever since.

I have been in the RV industry for 18 years. I spent the first 12 in production and then I’ve been in service – customer service, factory service, rebuilding units, doing repairs – for the past six years.

Primarily I like to spend time with the family. That’s more fun to me than anything. We go out kayaking, disc golf, we like to go out to the lake. Anything we can do to be outside.

I’m with the band Broken Lifters. We were formerly Dos Hermanos Band. We just kind of did a rebranding recently, adopted a new drummer. We’re getting into the studio in the next few months, so we’re pretty excited about that. We’re going to do our first full-length. Ten songs. It’s rockabilly and Americana.

My dad and granddad are both musicians. Granddad plays steel guitar and six-string, my dad primarily plays blues and rock. I really didn’t pick it up until I was probably 14 or 15. I started playing in a heavy metal band and probably did that for eight or nine years. Skeleton Thieves – we were local here in Goshen. We played a lot at The Post. That band broke up, and I decided I wanted to dig more into the roots of music. I started playing acoustic and singing in a band called Maple City Scoundrels. It was at our last show that I met Chris Gingerich, whom I now play with in Broken Lifters.

What I like about playing upright bass is the old-school, sort of jug band sound you can get from it. That clackiness when you play slap bass, just the fingers coming back off that fretboard – it’s half percussive and half melodic. That’s what I love about it.

I love The Elephant Bar because of the vibe. I actually went there quite a bit when it was the Dew Drop Inn. Maple City Scoundrels played there quite a bit. That is where I first laid eyes on my wife. Still, to this day, it’s my favorite place to go have a drink, chit chat. There’s just an awesome sense of community there.