Lesson.ly • The Good of Goshen 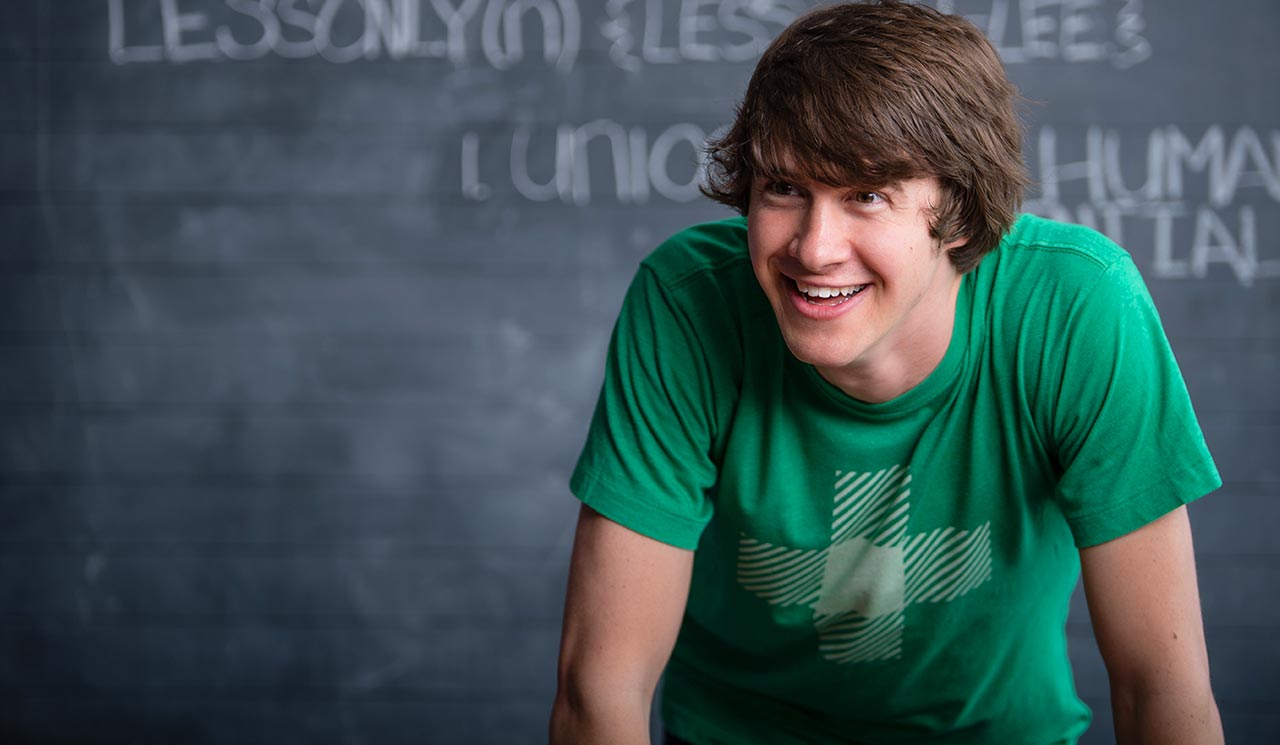 As much as Max missed his daily snooze, he lived for those grueling days – he loved the process, the collaboration, the constant learning.

“Dave was hugely influential to me,” said Max. “He was the architect of those videos. We’d be there for long 12-hour days and it would just be exhausting. But he did that every day for a couple weeks at a time, and he let me be a part of it because he knew it’s what I wanted to do.”

Kendall, a Goshen resident who now teaches video production at Goshen College, says, “Max was the type of teenager you could give a job to and you knew that it would be completed on time and in excellent form.”

Even as a high-school student, Max had a proficiency for technology. He spent much of his free time tinkering with computer equipment that he’d buy online. When it would arrive, Max would promptly take the machine apart. Then, piece by piece, put it back together again.

“I was really not good at sports; I never made it past tryouts,” Max said. “But the fact that I was cut from teams gave me time to gave me time to hone in on other skills.”

His primary role is co-founder and CEO of Lesson.ly, a learning-software startup for growing businesses. The startup launched in July 2012 and already has over 20 employees who have helped win hundreds of high-profile clients, including ModCloth, Lyft, Angie’s List, and Microsoft. In May of this year, Lesson.ly was awarded “Tech Startup of the Year” at MIRA 2015 and named best training e-learning software by G2Crowd in October of 2015. Overall, the company is poised to grow by 300% in 2015, after growing 850% in 2014. Seriously, it’s true.

The problem was, they had no idea how.

At the time, Max had already launched another software business called Quipol (an amalgamation of “quick” and “poll”), a software system that let bloggers ask questions and get simple yay-or-nay feedback from their readers. Quipol had a number of high-profile clients, like Forbes Magazine, but it wasn’t enough to ensure longevity.

“We didn’t make a dime,” said Max. “After trying Quipol for a year, I was burned out and depressed. [I] wasn’t getting out of bed. I didn’t want to do it anymore. But, I didn’t want to get a real job, either. That sounded miserable.”

When the idea for Lesson.ly was born, Max decided to go for it head on.

Could A $1,000 Fund for First Graders Make College A Reality?

Could Lesson.ly's Max Yoder be the next tech star?

A Sit Down With Indy’s Favorite Person: Lesson.ly to Pitch at Innovation Showcase

Max spent the early days working out of his apartment. Lesson.ly’s first clients were driven by friendships, but in a little over a year, Lesson.ly had grown large enough to share an office with another company, then to a slightly larger shared office, and eventually, to occupy their current 5,000 square-foot digs in a converted schoolhouse in downtown Indianapolis.

Max unites his team with an affectionate and friendly leadership. He encourages his 20-person team to collaborate across departments, play music, chat about what’s inspiring them, and take mid-afternoon naps in their designated “nap room”.

Lesson.ly isn’t Max’s only learning-focused project. In 2014, Max developed a nonprofit called The First Fund. It’s goal was simple: to find first-grade students with enormous potential but minimal means, and help guide them to success.

The First Fund creates a 529 savings plan in the student’s name and contributes a $1,000 “seed” investment. From there, the team mentors both the students and their parents, providing savings and investment strategies with the hope of increasing the students’ chances of advancement into college.

“If a student starts saving in the first grade, and the parents add $5 or $10 a month, and the interest keeps building, that money can go a long way. The parents start to see that saving for college isn’t magic – it’s a process,” said Max. “We want to explain the process, so people know how to help themselves.”

Selecting the scholarship recipients is the hard part, so they depend on the Indianapolis teachers who know the students best. First-grade teachers are invited to nominate students who they know could benefit from the scholarship. Max is now in The First Fund’s second year; the program currently supports 11 students. Max and his team, along with qualified volunteers, spend time with each of the kids on a monthly or quarterly basis.

“There are folks who don’t have any familial history of going to college – and it’s pretty daunting if you don’t know where to start,” said Max. “We are here to reduce the guesswork and empower families through education.” 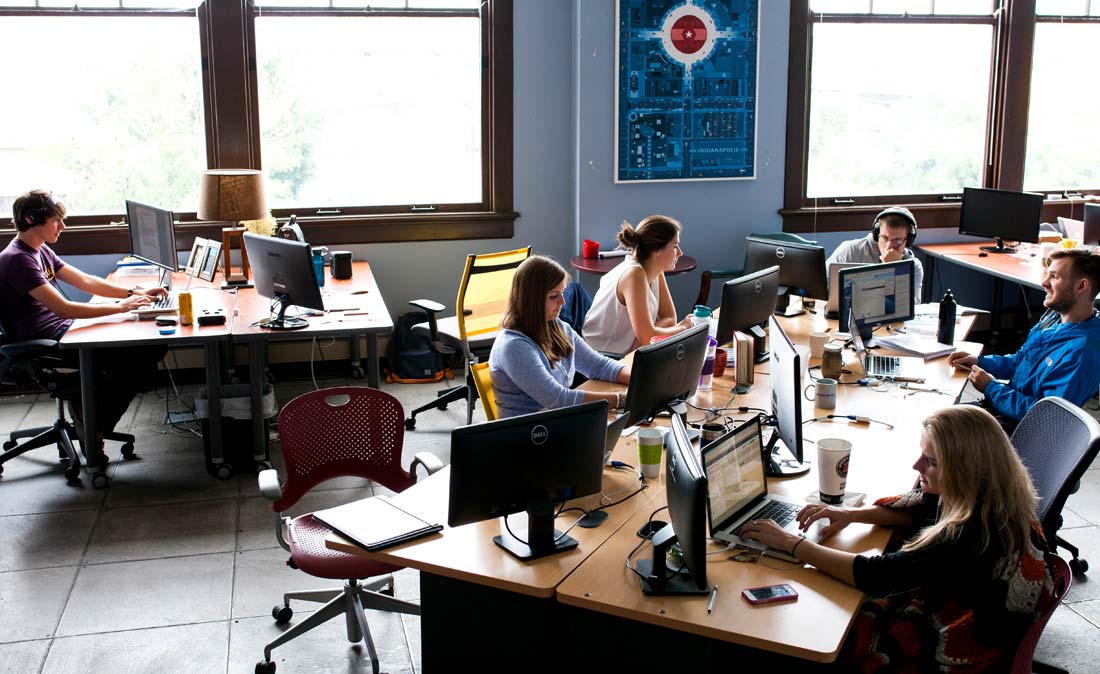 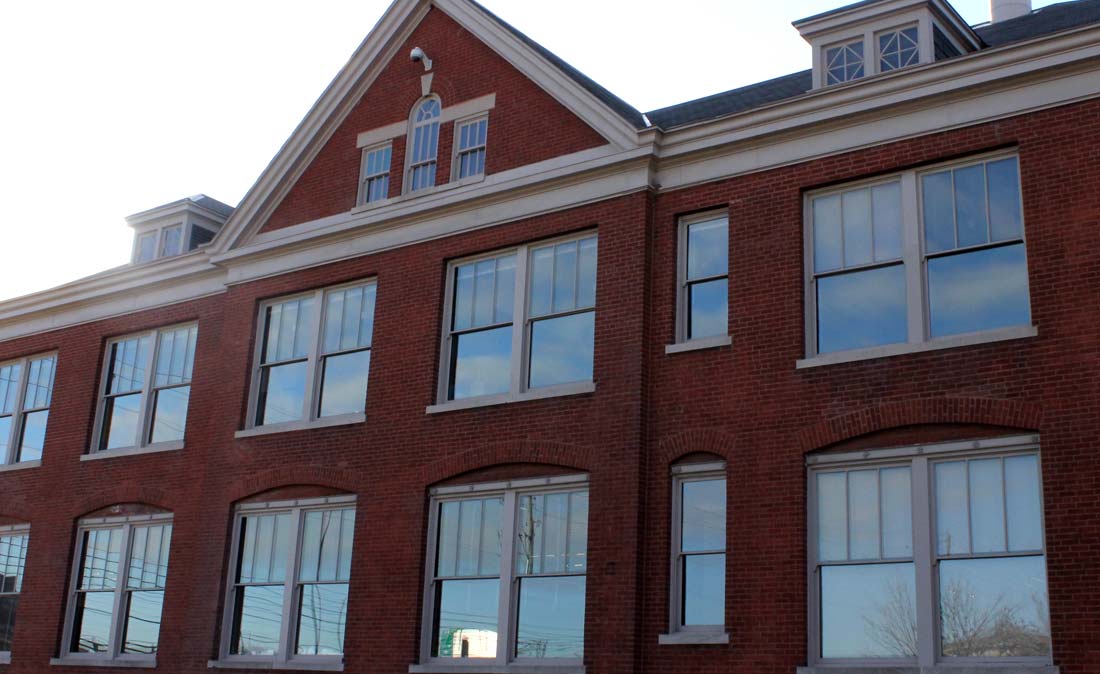 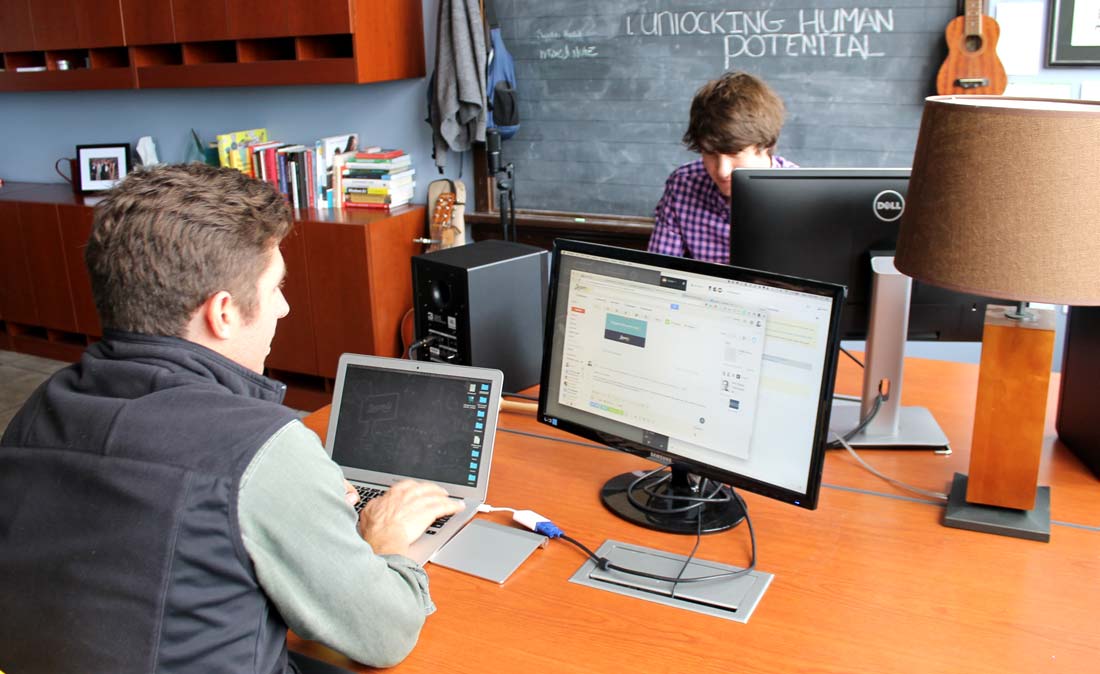 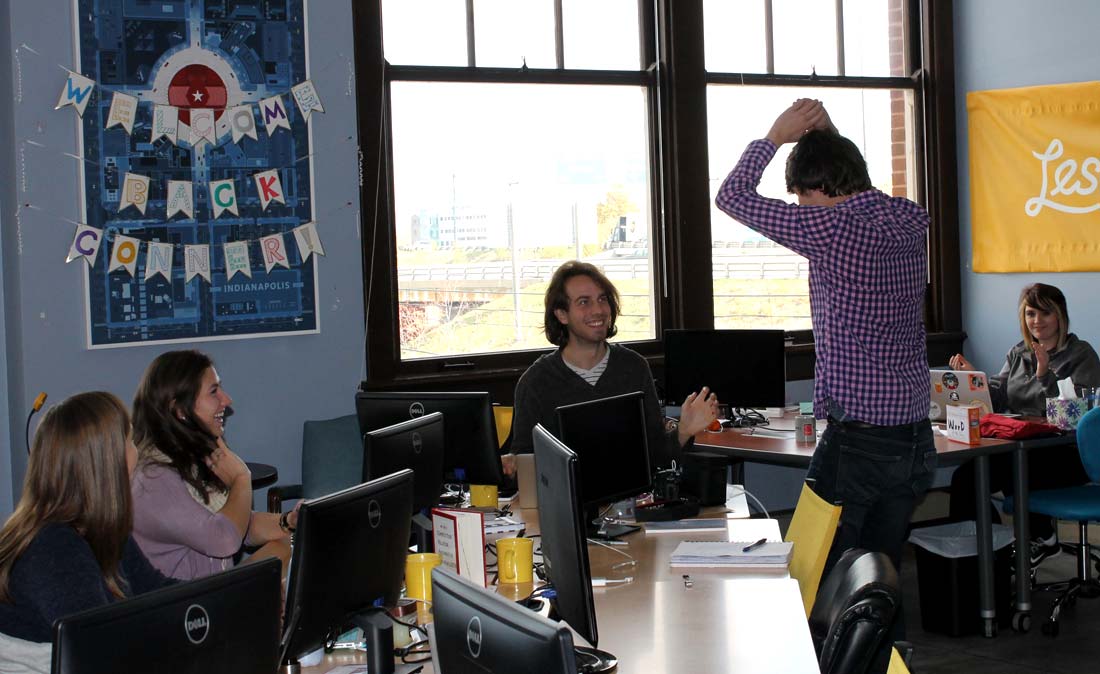 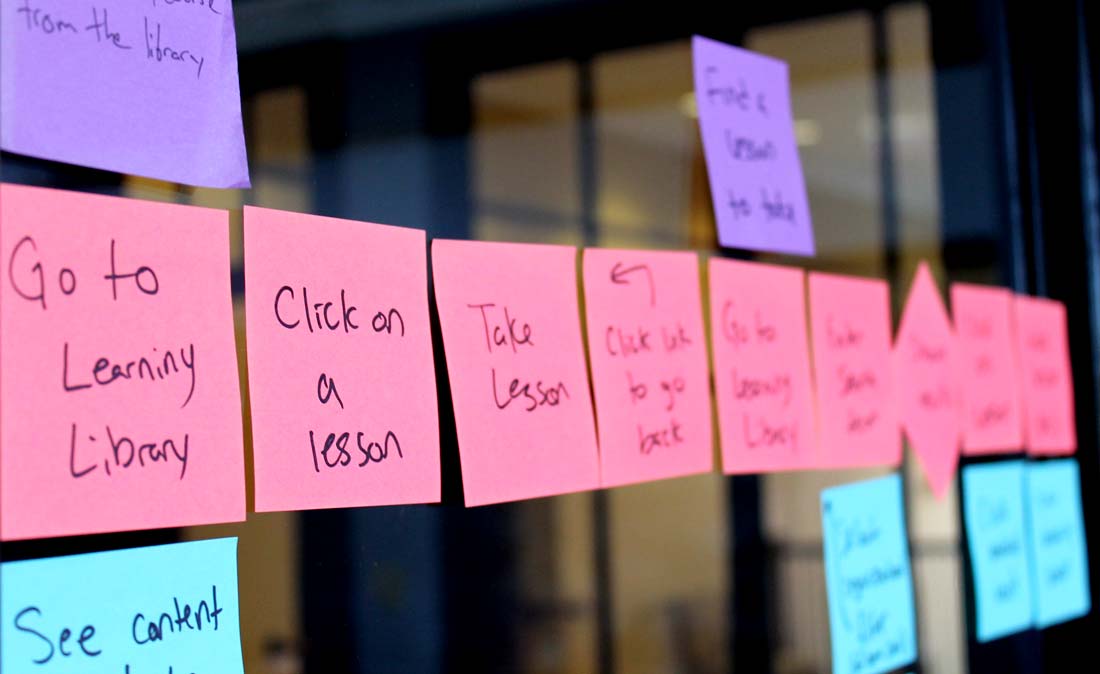 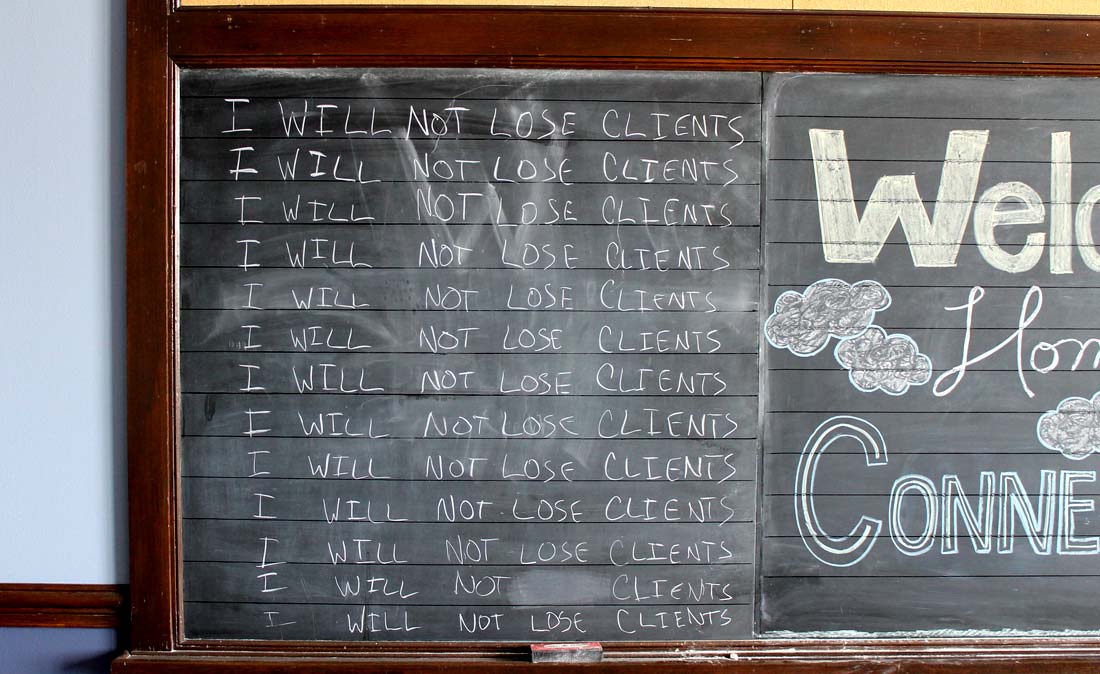 Though Lesson.ly and the First Fund are gaining recognition around the world, Max is set on ensuring his team’s integrity.

“We want people who are humble, hardworking, and helpful,” said Max.

Three values, Max says, he learned while growing up in Goshen.

“So much of my desire to build a community at Lesson.ly is built around these values, because I have seen them work so well in Goshen,” said Max. “It’s a place where people really look out for one another.”

“I look for employees that are compassionate and self-aware,” he said. “That all stems from the people I know back home.”

Max visits home every few months to visit his family and friends. When he does, he says, he falls more and more in love with the place that nurtured his value system.

“I get prouder every time I come home,” said Max. “When I see how vibrant the downtown is … it’s so inspiring to see local stores with so much support from the community. I’m proud of the people who made a concerted effort to make Goshen the way it is today.”