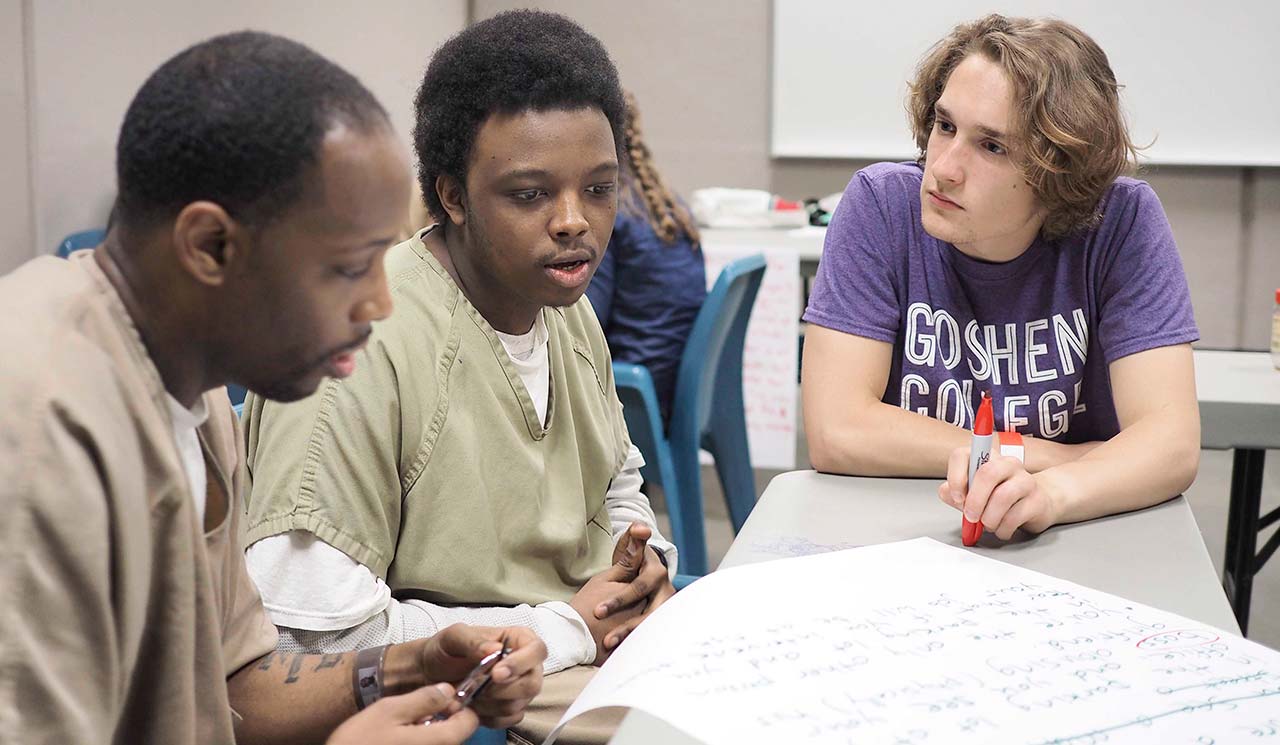 Every May, nearly a dozen Goshen College students go to jail.

They’re not incarcerated. They do, however, get an inside look at part of the criminal justice system – and meet new classmates who will impact their lives.

It’s all part of Goshen College’s Inside-Out Prison Exchange program, which takes place over three weeks during the college’s May Term. Through Inside-Out, Goshen College students (“outside students”) and jail inmates (“inside students”) learn together and get to know one another at the Elkhart County Correctional Facility.

“It was just a great time,” recalled Mike Miller, an inside student during the program’s first session in 2014. “They made it very friendly. I’m sure they were a little leery of us, and we were of them at first, but in the end we gained 12 new best friends.”

The seed of that future friendship took root at Goshen College.

Carolyn Schrock-Shenk, an associate professor of Peace, Justice and Conflict Studies, is one of the program organizers. For several years, she has taught restorative justice, an approach to offender rehabilitation focused on accountability and reconciliation with victims. Schrock-Shenk takes her students into the correctional facility as part of the class.

“It always impacts them,” she said of the visit. And in 2011, a group of her students asked, “How do we get more involved?”

The answer would prove to be Inside-Out Prison Exchange Program, an outreach effort founded in 1997 and based at Temple University in Philadelphia. Aimed at breaking down barriers between inmates and college students, Inside-Out has expanded to more than 100 colleges and universities around the globe. Initially focused on criminal justice, Inside-Out courses now include drama, arts and humanities, law, science, etc.

Schrock-Shenk heard about the program, and it captured her imagination. Along with other professors from around the country, she went through seven days of Inside-Out training, some of them at Graterford Prison in upstate Pennsylvania.

“There is a group of lifers in there who are part of the core training team,” Schrock-Shenk said. “We went in as professors, and they were the trainers. They have turned their lives around. They are doing amazing things on the inside. I walked out of there feeling like I had been on holy ground. I was hooked.”

Back home, Schrock-Shenk got in touch with Elkhart County Sheriff Brad Rogers, who felt Inside-Out was definitely worth a try.

“I, too, believe in restorative justice, in trying to reduce recidivism and trying to bring offenders back into our community,” Rogers said. “That’s a very important element, allowing people to be successful once they come back.”

And most inmates do, in fact, come back to the community. Schrock-Shenk pointed out that 95 percent of people in prison or jail are eventually released, and around 60 percent are re-arrested within 3 years of their release. But, citing another statistic, Schrock-Shenk said that if inmates receive education “inside,” recidivism drops by 40 percent.

“I try to set an example on this,” Rogers said. “I don’t want to just warehouse inmates: I want to give them programming, work on different capacities, their spiritual development and so on.”

The Inside-Out idea has caught on. Schrock-Shenk said that thanks to strong community support, a second class was added last year. Two courses are now run simultaneously at the jail: one on the women’s side titled “Borders, Boundaries and Bridges” and one on the men’s called “Justice in Our Lives.” 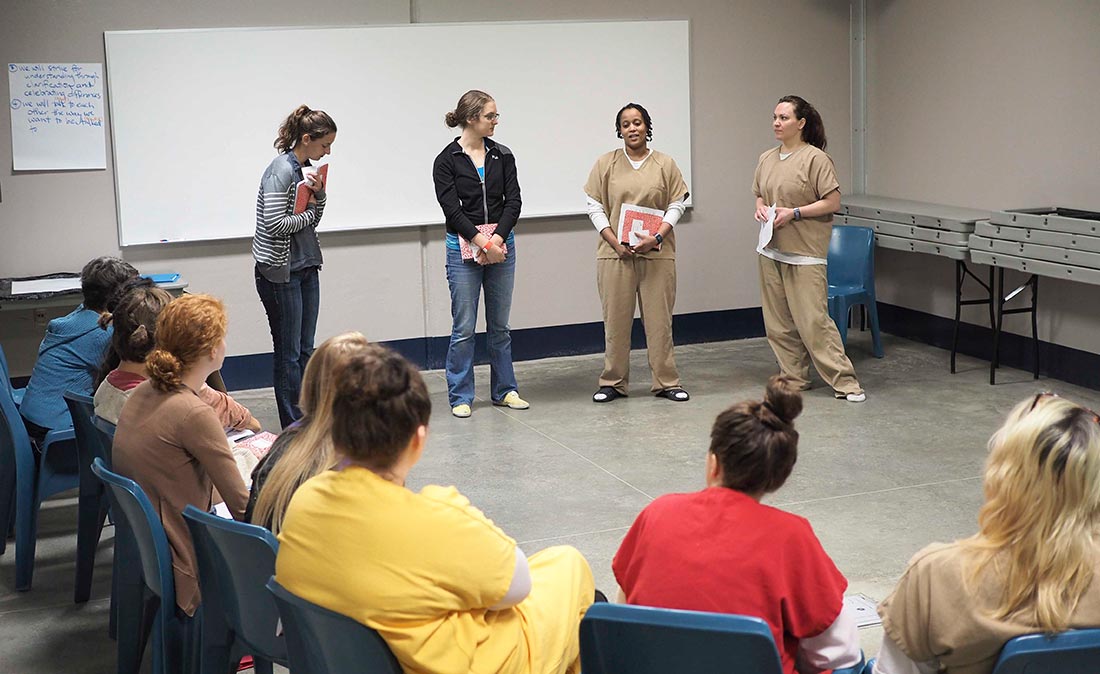 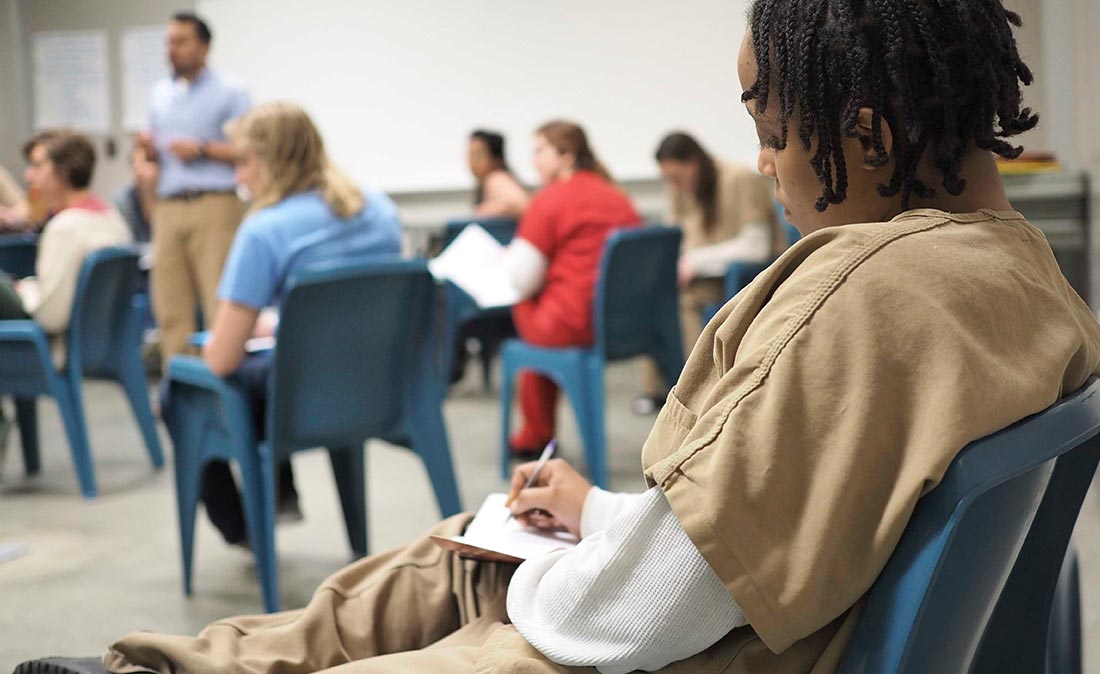 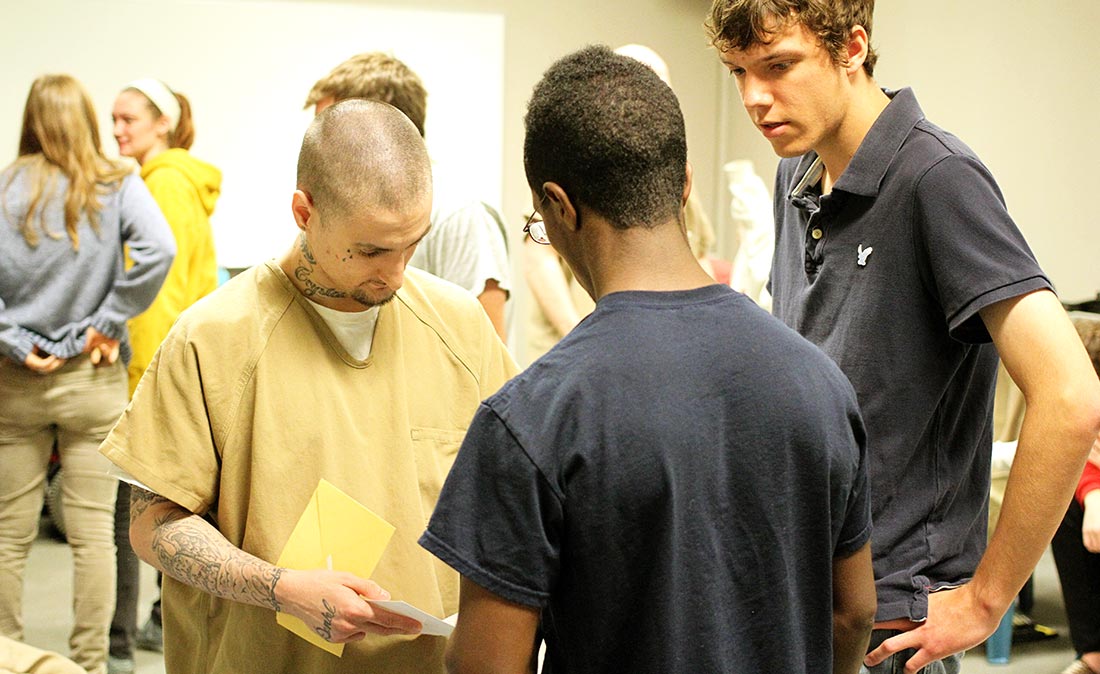 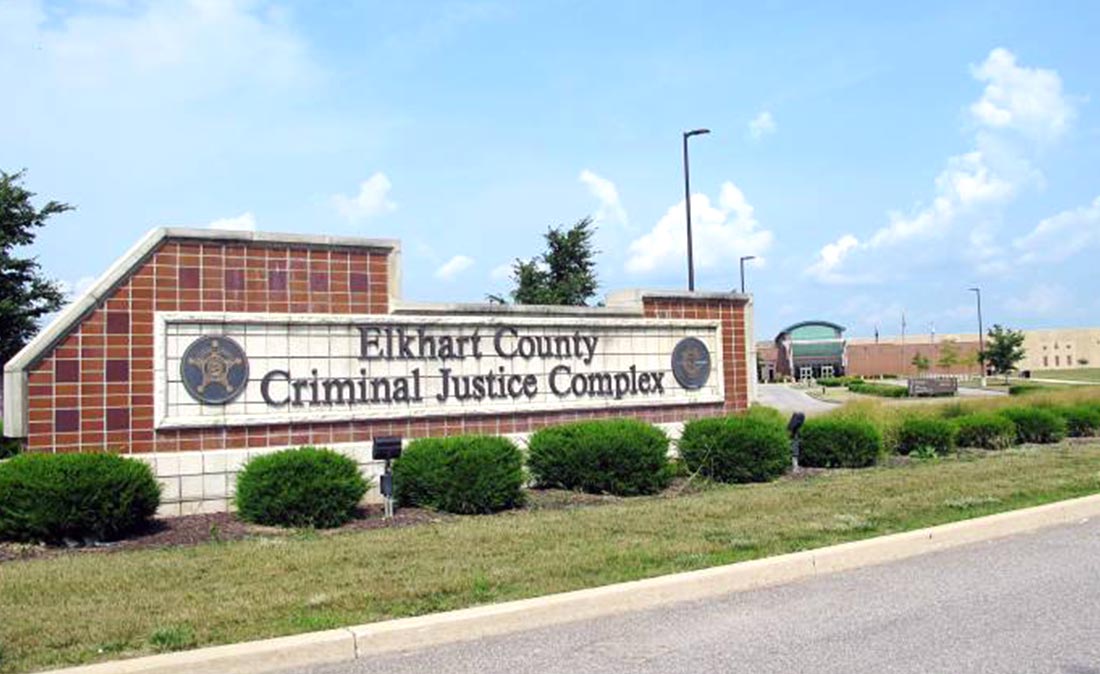 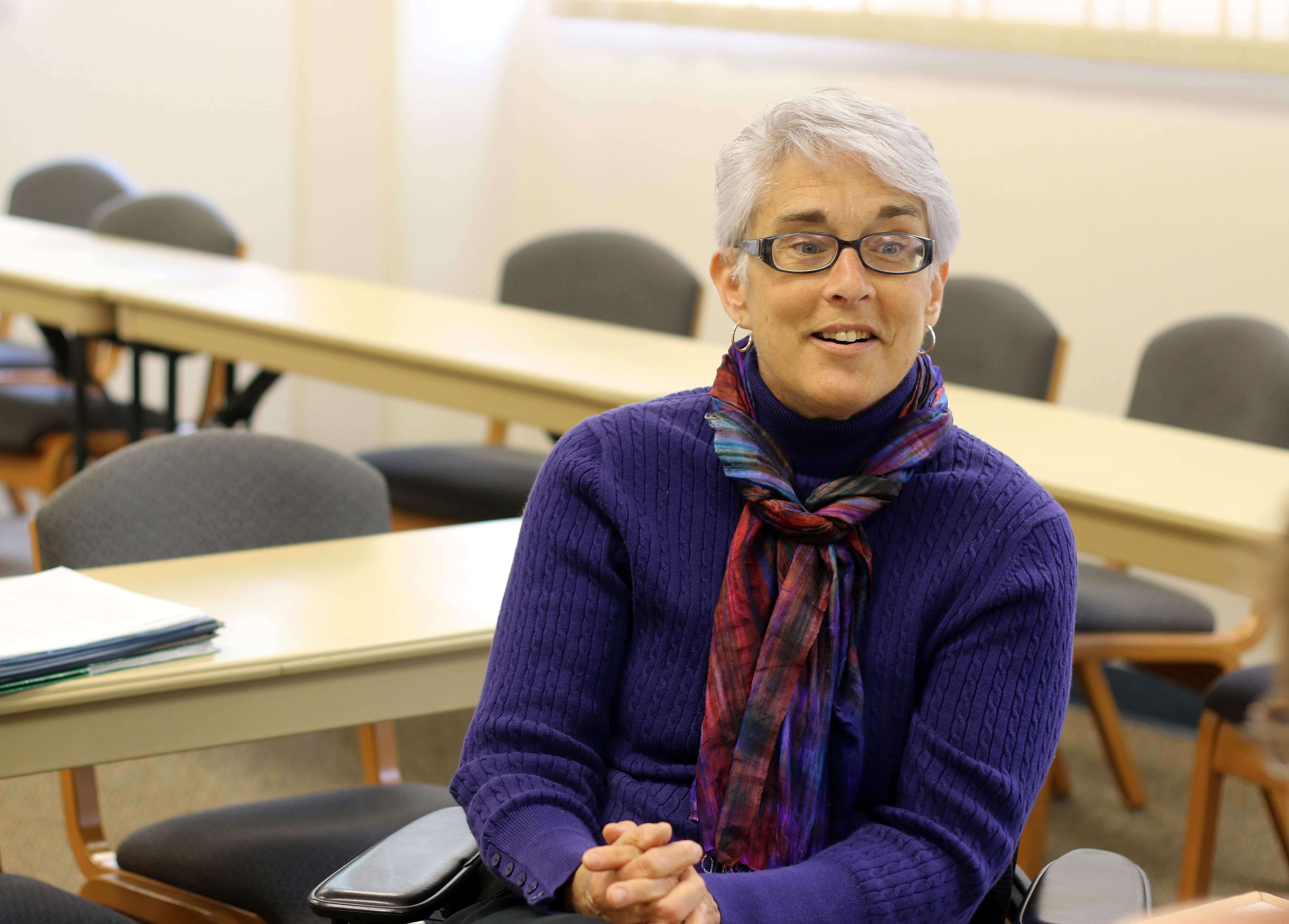 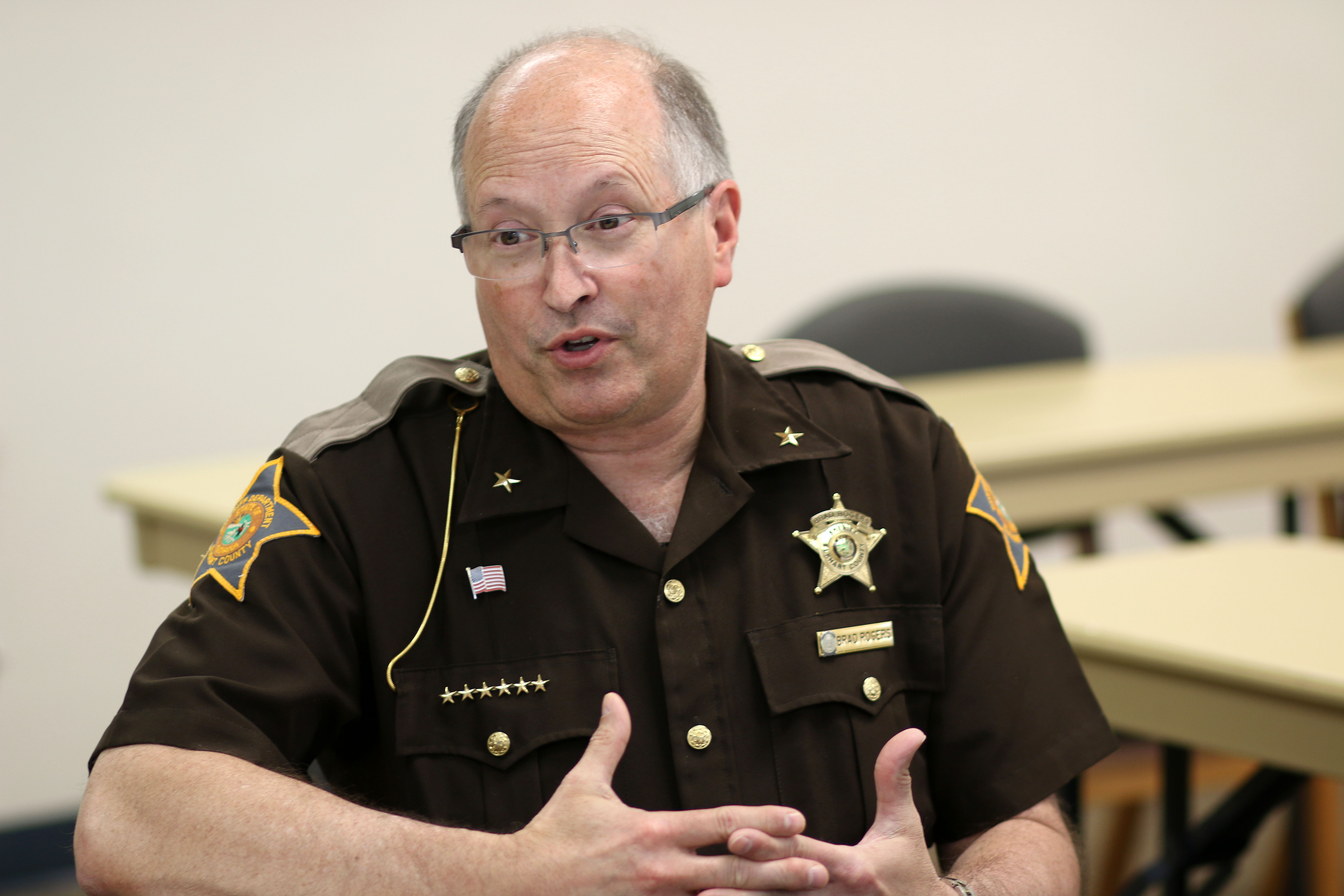 Jail officials identify inmates they feel are well-suited to be “inside” students. Goshen College students also go through an interview process before they are selected for the program. Among those picked was Lena Charles, one of this May Term’s “outsiders.”

“I have made 11 new friends who show up to every class in uniform,” she said of her Inside-Out experience. “I have shared very profound, difficult, but always civil conversations with them; which I cannot imagine having with anyone else in my life.”

Charles has heard personal stories and opinions so different from her own that they prove her Peace, Justice, Conflict Studies minor has value.

“I now understand that the reality of the world is nothing like Goshen College, and it needs our help,” she said.

Charles has also gained an understanding of both the intentions and shortfalls of the criminal justice system.

“I’ve learned to humanize the thousands of people ‘behind bars’ in our country,” she said. “Often, they were the victims of a harmful environment long before they became the offender due to a lack of access to healthier alternatives. They are bright individuals who have so much to offer to the outside world if only they had the right support and access to restorative justice that addressed their individual needs.”

For outside student Sam Smucker, Inside-Out was an empathetic and humanizing experience.

“I often found my assumptions challenged in our class discussions, and I had to practice affirming the truth and honesty of opinions that differed strongly from my own,” said Smucker. “We did not come to easy agreements or solutions to the issues we discussed, but as we all shared, the threads of our experiences were woven together to leave us each with a more complicated, but more complete vision of our lives and relationships to one another.”

Smucker said the end of class each day came as a shock. It was a reminder that while some students were allowed to be free, others faced continued imprisonment – “an idea that was so easy to forget when we were engaging with each other as equals.”

Miller, part of the Inside-Out Class of 2014, isn’t surprised the local program has continued to be offered.

“It was such a success, they couldn’t help but bring it back,” he said. “Even the officers and volunteers were moved. It was really a great experience.”

“The outside students gain a better knowledge of the criminal justice system,” said Klosinski. “But more than that, they realize that the inmates are regular people – just like them – who made a mistake,” she said.

Klosinski said the inside students have told her they appreciate being able to discuss topics with the outside students, instead of having someone talk to them.

“I think the class has given many of them a confidence they didn’t have before, a sense of accomplishment, as many of them have never completed or finished anything of any great significance in their lives before,” she added.

Klosinski also notes the contrast between the first and last day of Inside-Out.

“On the first day, both inside and outside students are visibly nervous and afraid to make eye contact,” she said. “By the last day, there are tears being shed. We have had to almost drag the outside students from the classroom because they don’t want leave or stop talking.”

The end of Inside-Out can be hard on the inside students, too. This year, one of them was due to be released before the class was over.

“He was really bummed,” said Schrock-Shenk. However, he was given permission by jail officials to come back as an outside student and finish the class.

Schrock-Shenk herself has been moved by the course. She shared a statement from a 2015 inside student.

“After a couple of classes, he said, ‘It’s like something woke up in me that I didn’t know was asleep,’” she said. “Those words will always stick with me.”

“It gives me hope. Hope for our future generation. The outside students are the voice for us on the inside who have no voice.” – Flynn, inside student

“I take hope, joy and motivation to set off in a newfound way of living.” – Kurtis, inside student

“I certainly won’t be able to shake this class off any time soon. I’ve been changed in a way I have yet to understand and moved in a way I will never forget.” – Abby, outside student