Here’s How Goshen College is Becoming a Leader in Sustainability 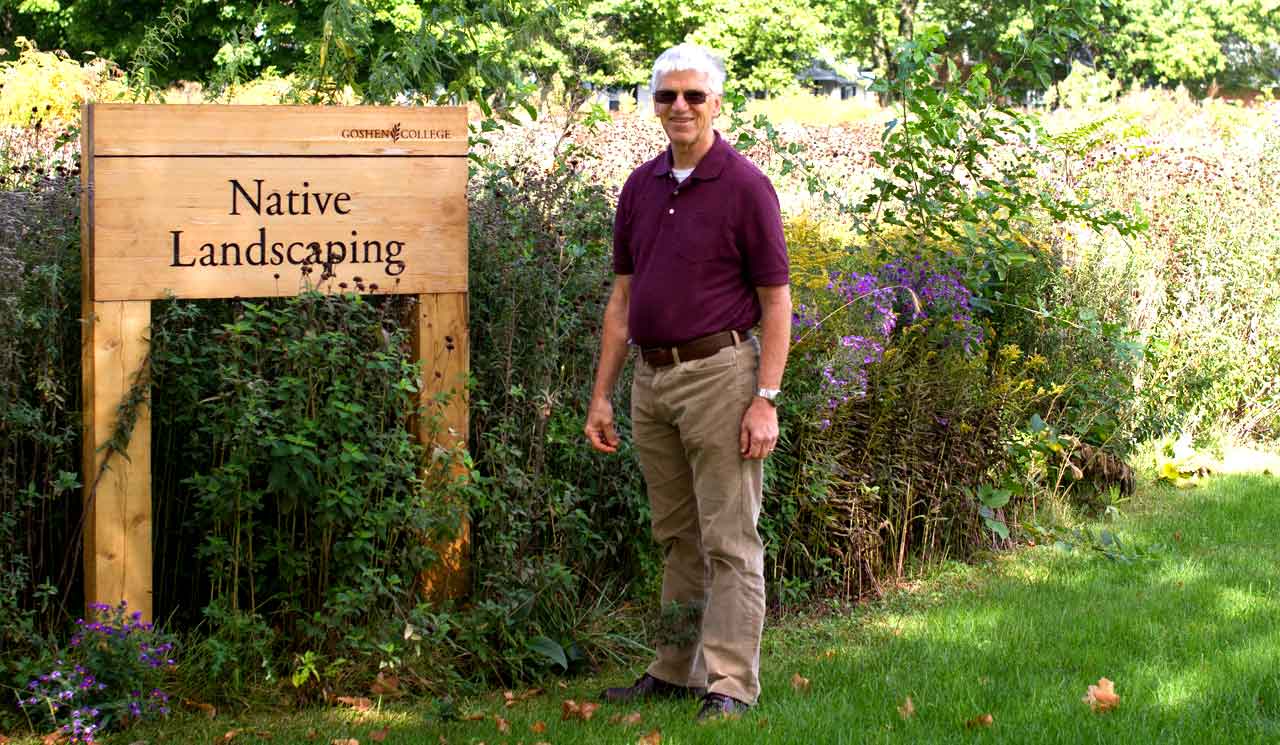 It’s the middle of the night, and a group of Goshen College students are finishing up a game of Dutch Blitz in the dorm lounge. They pick up their cards and walk back to their rooms. Goodnights are said, doors are shut, and soon, and all is quiet on the floor –– except for the faint hum of overhead lights.

Seconds later, the floor still empty, the lights flick off.

You see, Goshen College employs “occupancy sensors” which automatically shut off power where it’s not needed. This smart lighting dramatically cuts the college’s energy output and, of course, their monthly bill –– just one of the many ways Goshen College is becoming a leader in energy efficiency and sustainability.

The push toward a cleaner campus is thanks in large part to Sustainability Coordinator and Utilities Manager, Glenn Gilbert. Glenn is an expert in efficiency. Since he was hired in 1985, he has digitized approximately 90 percent of the college’s energy management so that he can monitor usage straight from his iPad. Glenn has also helped the college cut the energy usage drastically. Since 1992, electrical consumption has been reduced by 10 percent and natural gas consumption has been reduced by 30 percent. This is no small feat when you consider that the campus’ building square footage increased 60 percent during that same period.

“It’s all about how we use technology,” said Glenn. “We have more need for energy than ever before. Everyone has a computer, all the dorms are air conditioned, and we have more buildings. But we’re using our energy more efficiently.”

Schedule a visit to the GC campus

Going Green Before It Was Cool

Glenn doesn’t remember a time when Goshen College wasn’t environmentally conscious. The college was “going green” long before it was a trendy catchphrase. According to Glenn, professors in the science department were teaching students about sustainability as early as the 1950s. With the acquisition of the Merry Lea Environmental Learning Center and the Marine Biology lab in the Florida Keys in the 1980s, sustainability became even a more important focus of the Goshen College culture.

Although the institution has always been environmentally aware, it wasn’t until 10 years ago that Goshen made its commitment to sustainability official. In April 2007, President Jim Brenneman signed the American College & University Presidents Climate Commitment to drastically cut the college’s carbon footprint. Driving that goal home again in 2013, President Brenneman announced that the college would begin purchasing 100% of their electricity from renewable energy sources, such as wind and solar. This action would eventually reduce the college’s carbon footprint by 45 percent.

In 2015 and 2016,  the campus was named an official “Tree Campus USA” by the Arbor Day Foundation, a designation that honors colleges with effective forest management programs that engage in sustainability goals. Then in 2016, the college was given an honorable mention as a “Bike Friendly University” by the League of American Bicyclists, an organization that recognizes colleges that promote and provide a more “bikeable” campus.

Impressed? There’s more. Students and professors in the science department designed and built a solar-powered hot water heater to heat showers in the fitness center; the college harnesses heat via geothermal power in five buildings; the campus maintains 12 acres of native landscaping to cut down on mowing and the use of chemical herbicides; and students manage a composting project to reduce food waste.

“We have lots of educators who are passionate about the environment, whether they teach those subjects or not,” said Glenn. “The environment seems to span all the disciplines.”

It’s not surprising that these initiatives are attracting national attention. Goshen College has been named one of America’s greenest colleges by both The Princeton Review and Sierra Club. 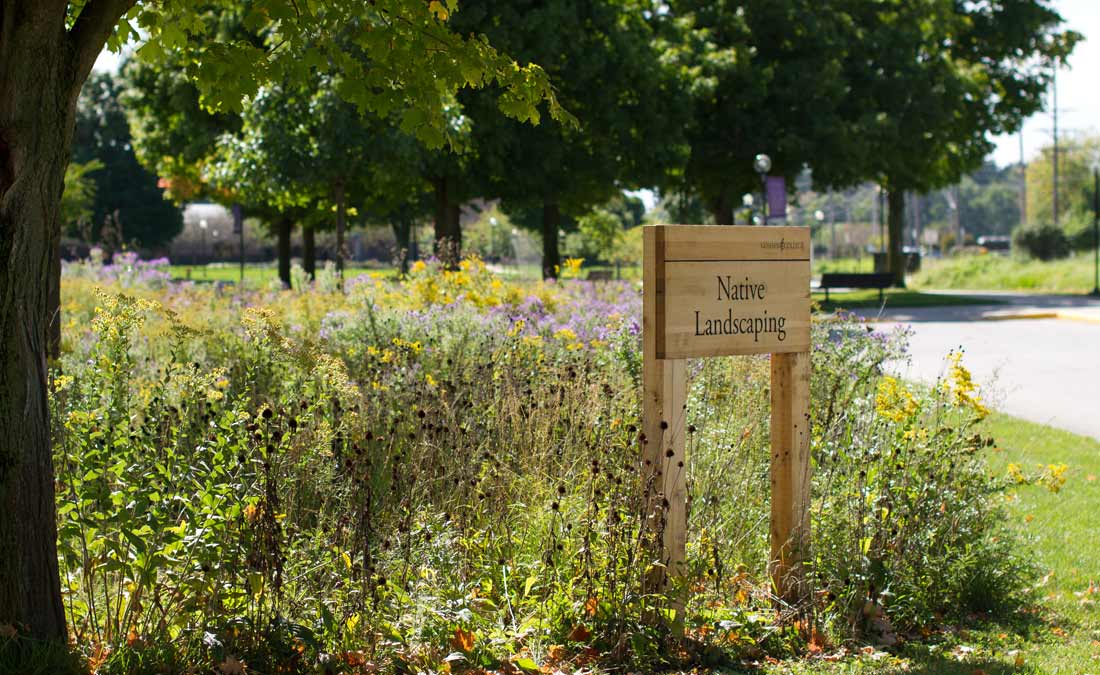 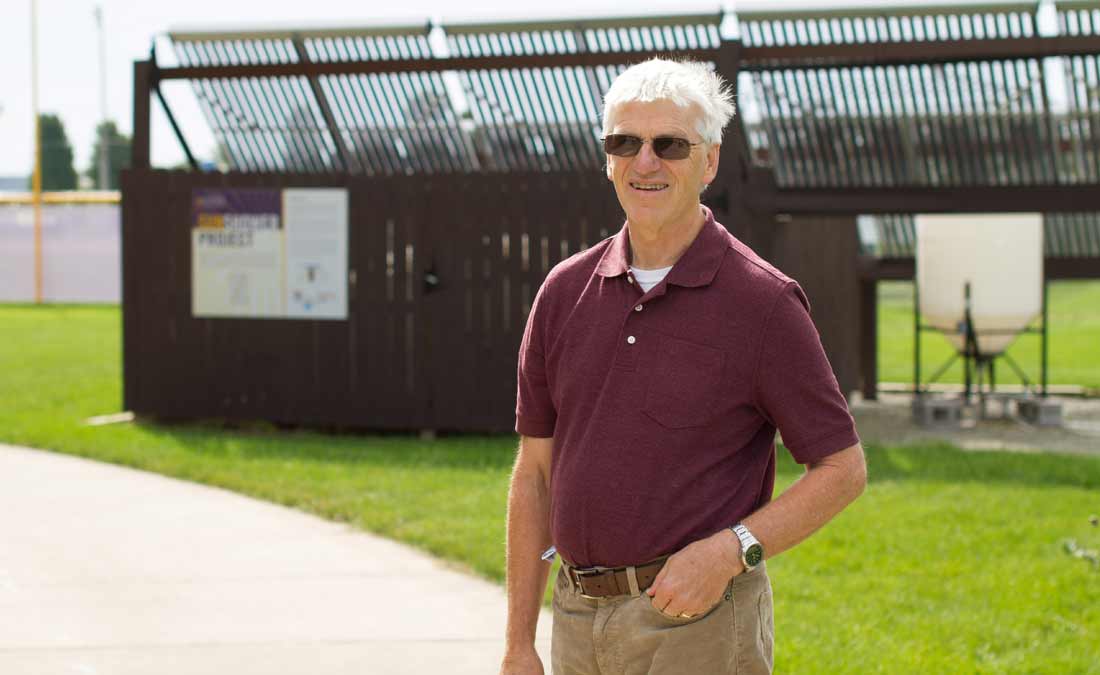 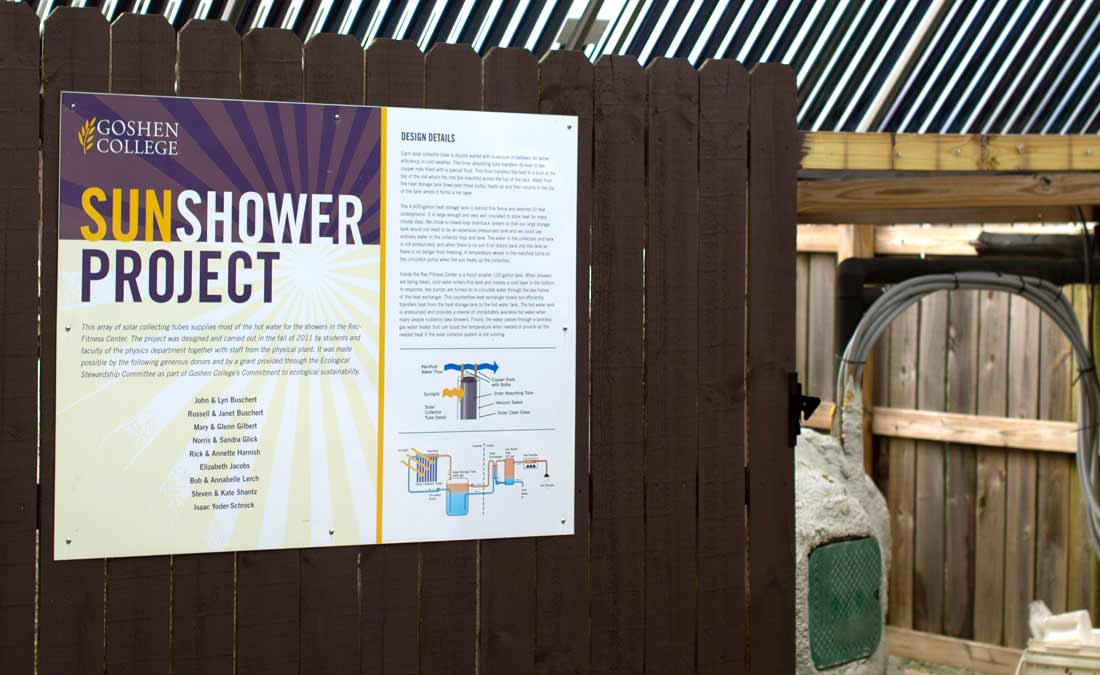 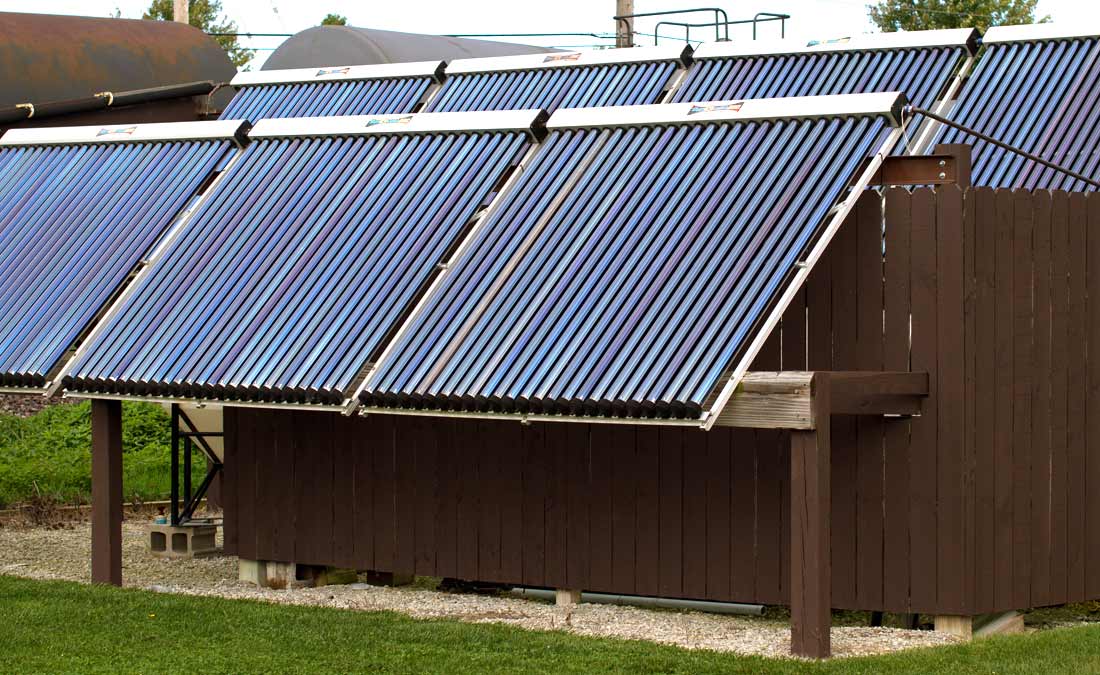 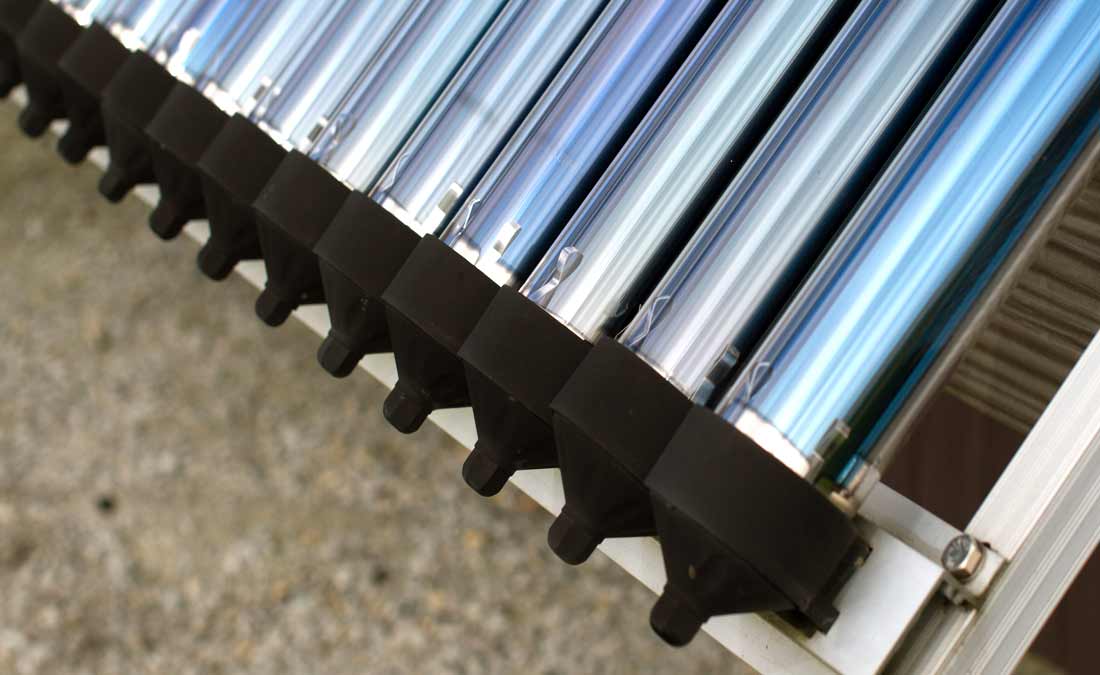 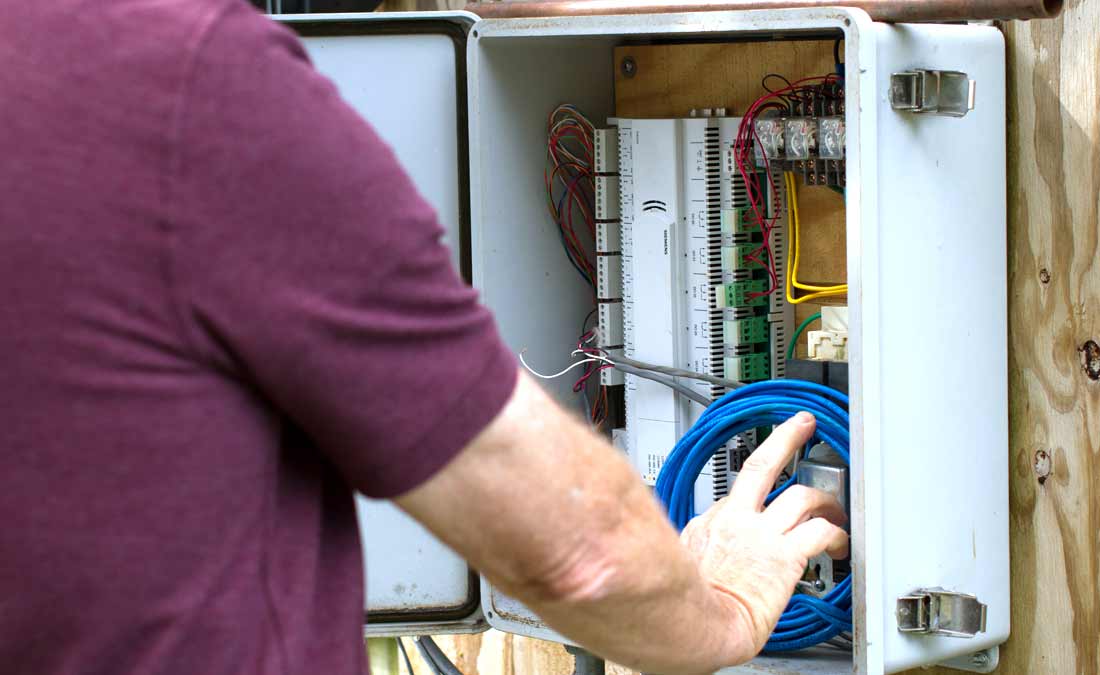 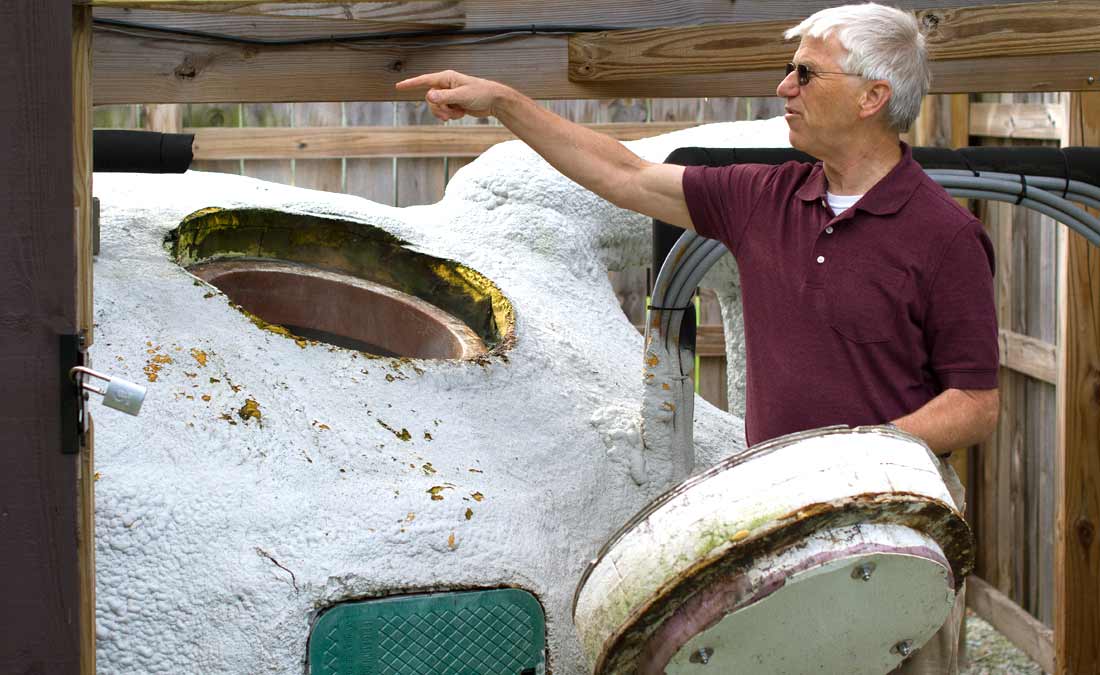 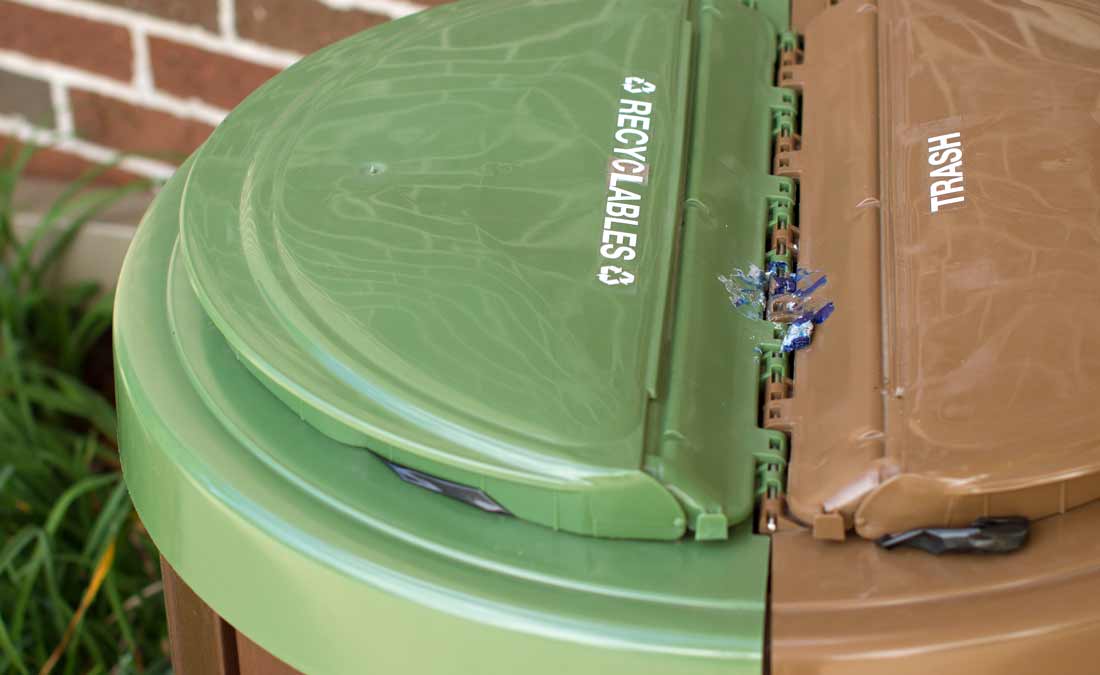 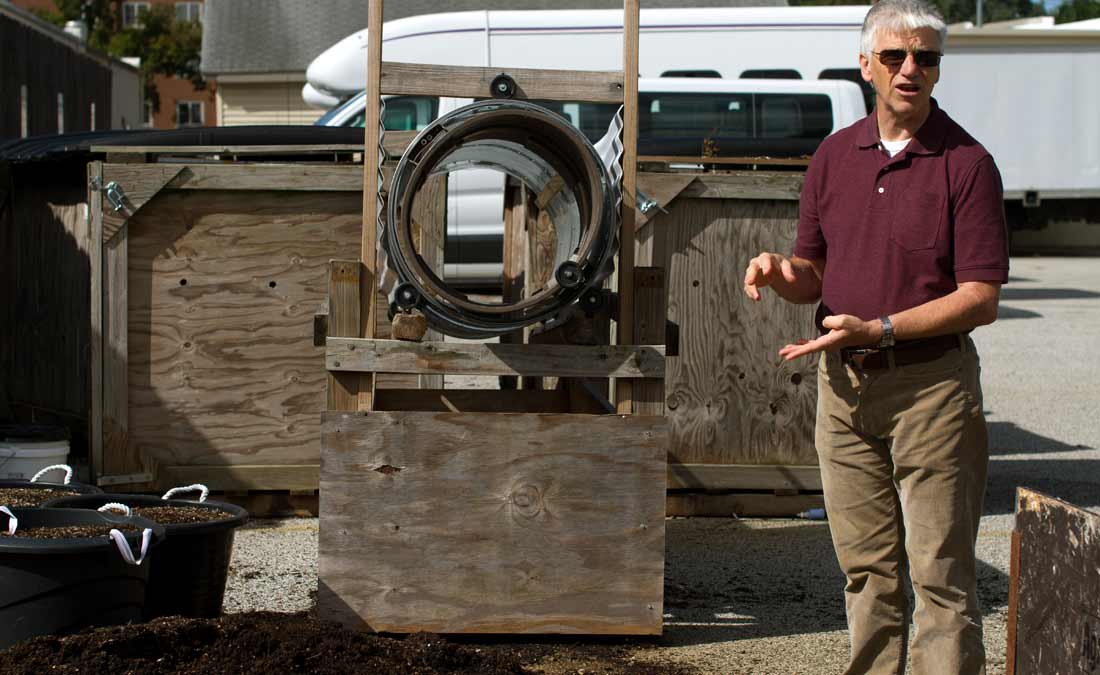 The college’s biggest energy source isn’t solar or geothermal or even electricity. It’s people. Glenn says that if it weren’t for the bright ideas of students and faculty, campus would not be nearly as sustainable.

“Often, students come to college with a passion for the environment already, which further moves us along,” said Glenn. “For example, the entire recycling program started because students wanted to make it happen.”

Glenn has supported countless students in taking leadership roles in sustainability initiatives. He has offered campus lectures about sustainability and overseen student-led projects like composting and recycling.

Of course, Glenn says, the students often have plenty to teach him too. Students pave the way toward a greener campus through the student-led club, EcoPAX, which hosts regular meetings and events that promote ecological awareness and action. Events have included seed-planting, potlucks, documentary screenings, and trips to conferences.

Fortunately for the city of Goshen, the college’s drive towards a more sustainable future doesn’t stop at the edge of campus. Glenn and a team of faculty, students, and administrators have been able to reach out to the broader community through a group called the Ecological Stewardship Committee. Founded in 2008, the committee leads the campus in efforts to encourage sustainable practices. One of the group’s central goals is to promote the broader awareness of Goshen’s efforts toward sustainability.

“It’s clear that there has been a movement towards acceptance of sustainability in our community,” said Glenn. “I don’t see it as people having opposing views about it, but a bunch of people on a journey. And I feel good about where that journey’s going.”

Of course, the college’s commitment to sustainability isn’t without a larger mission. The desire for sustainability grows directly out of the college’s faith foundation. To many administrators, professors, and students, being responsible with their resources is a large part of being a good steward of creation.

“Our commitments to ecological stewardship and sustainability grow out of deeply held core values that acknowledge the claim in Holy Scripture that ‘the earth is the Lord’s and everything in it,’” said Goshen College President James Brenneman. “Given the vulnerable state of our home planet, we humans, created as we are in God’s image, bear the unique responsibility for its well-being. At Goshen College, we are called, now more than ever, to love and care for the earth and everything in it for the blessing of all future generations.” 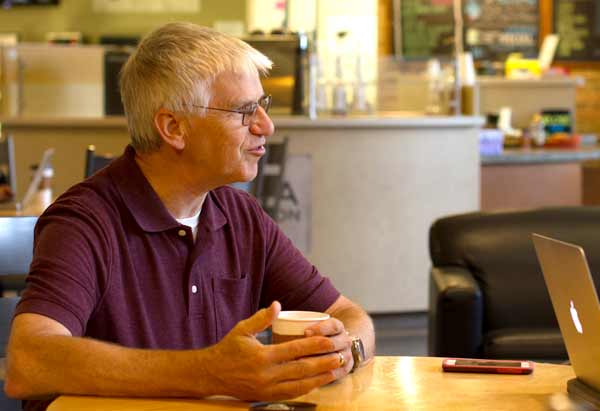 “We have lots of educators who are passionate about the environment, whether they teach those subjects or not.” 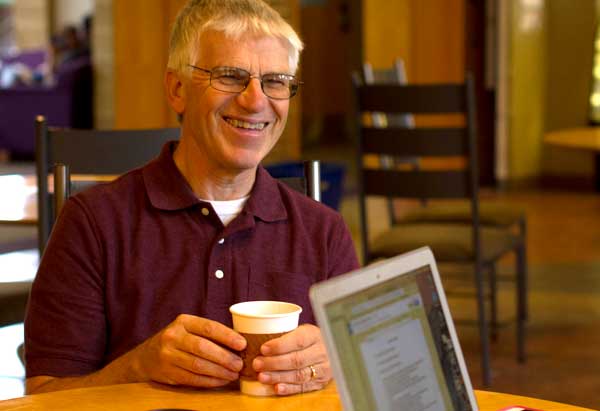 “Often, students come to college with a passion for the environment already, which further moves us along.” 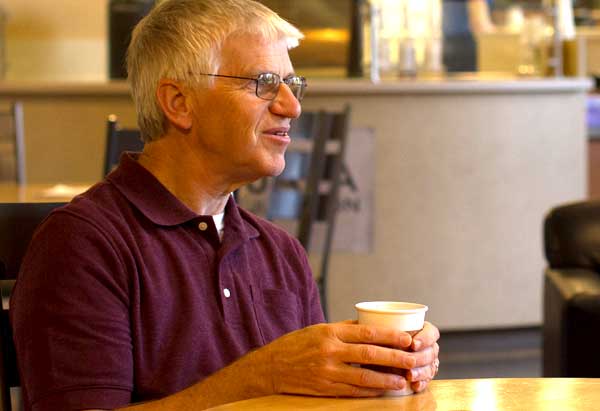 “It’s clear that there has been a movement towards acceptance of sustainability in our community.” 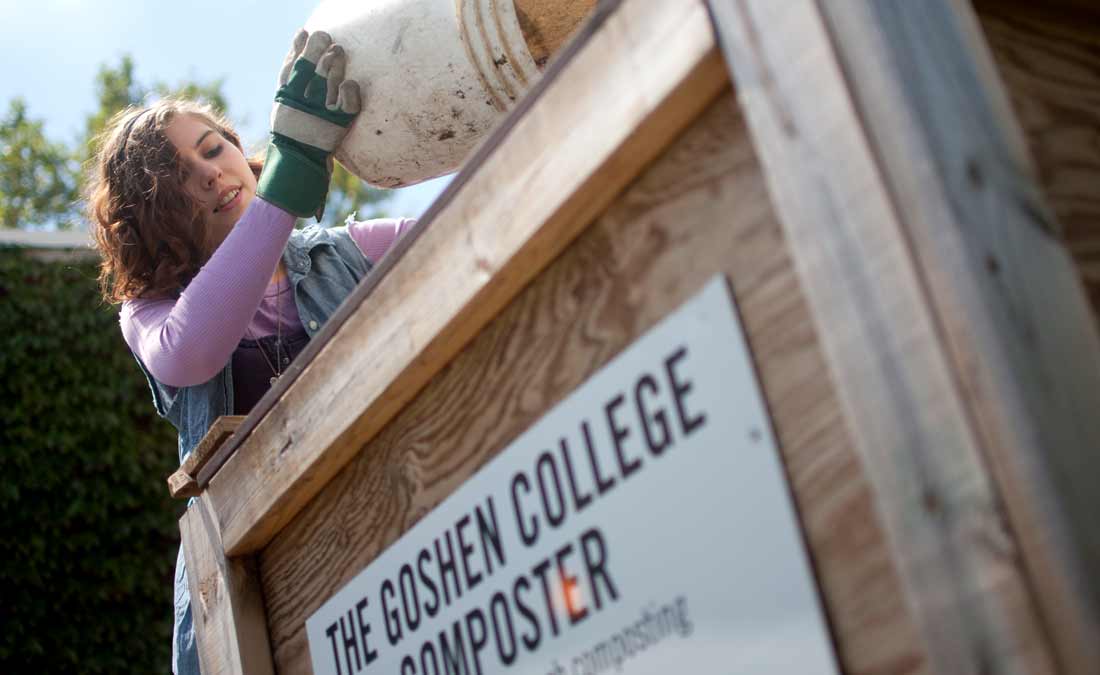 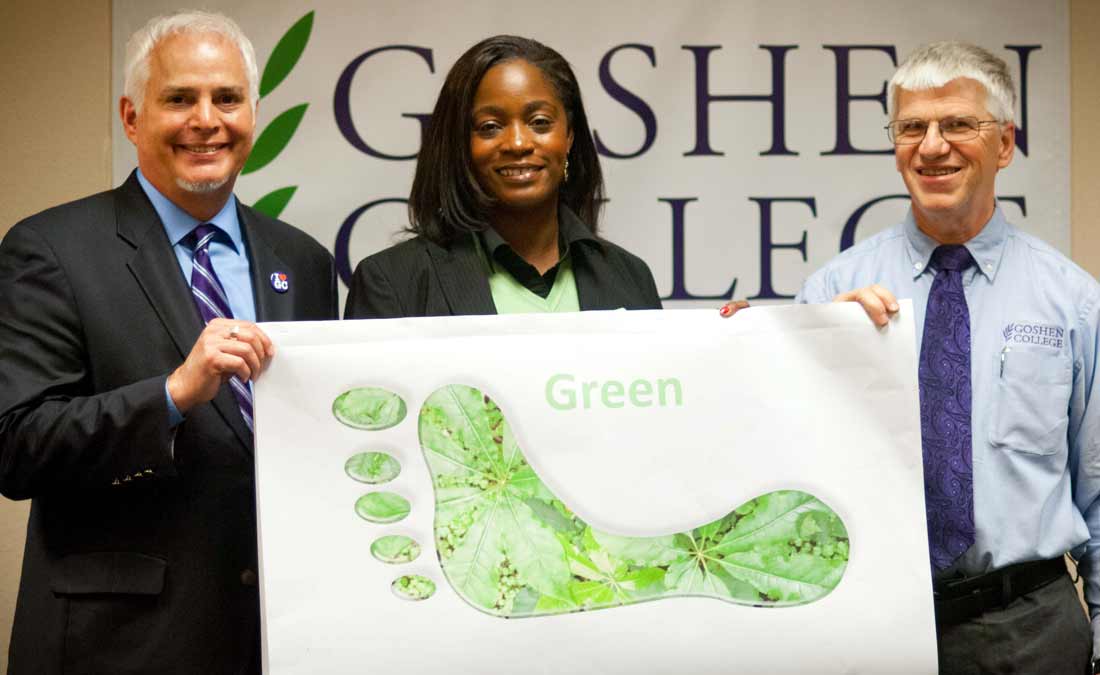 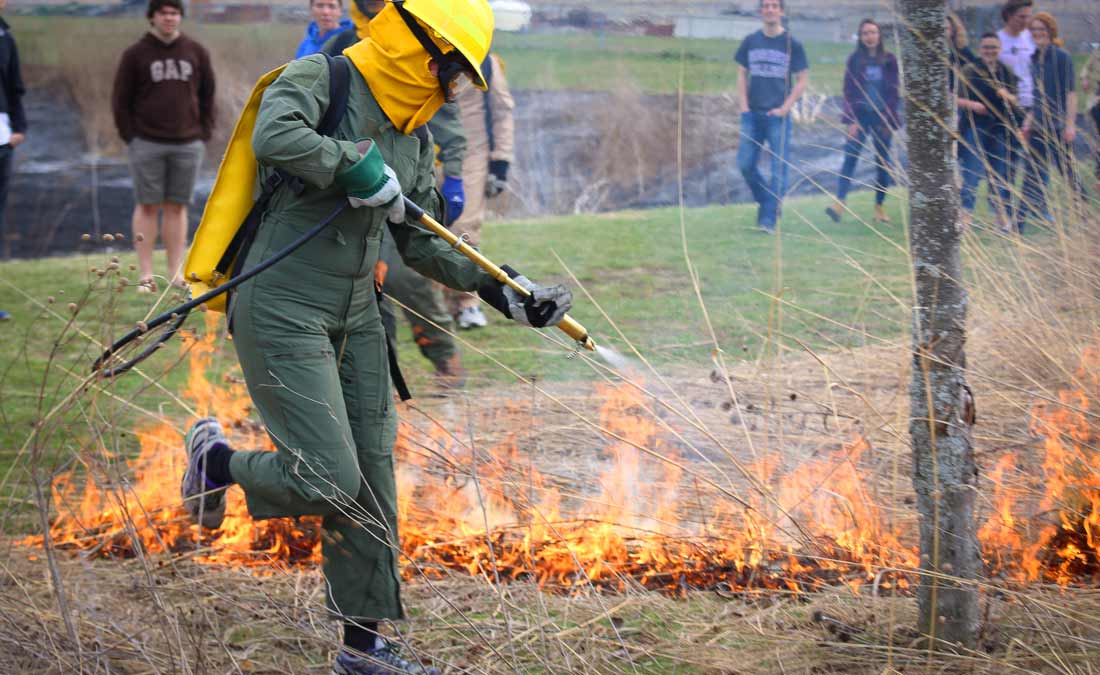 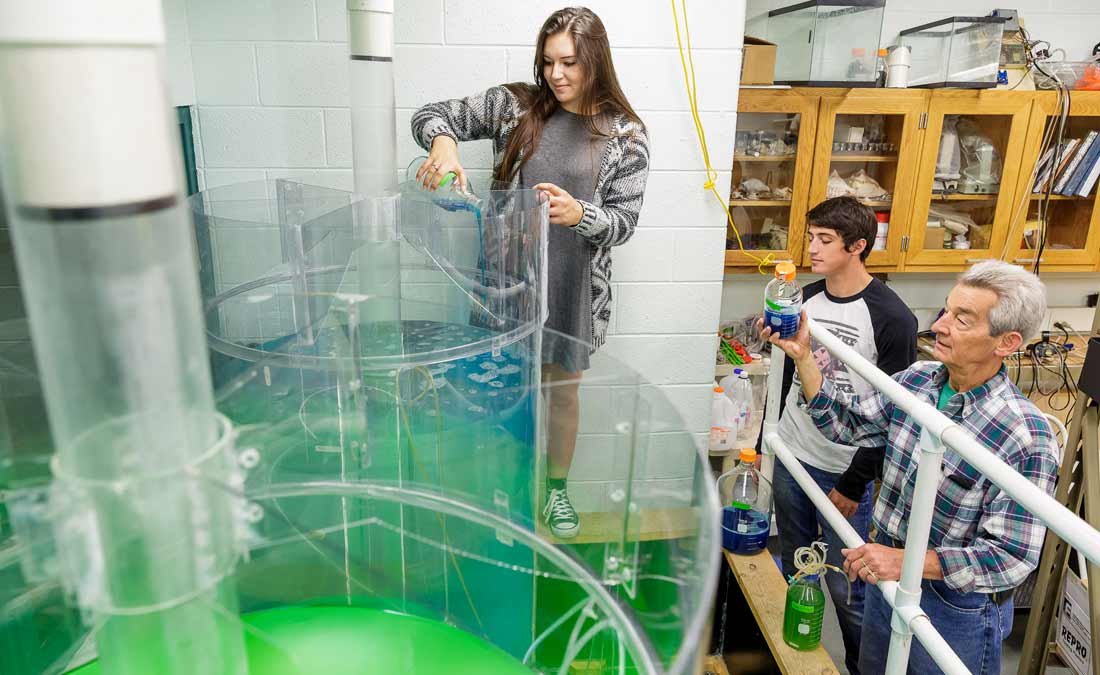 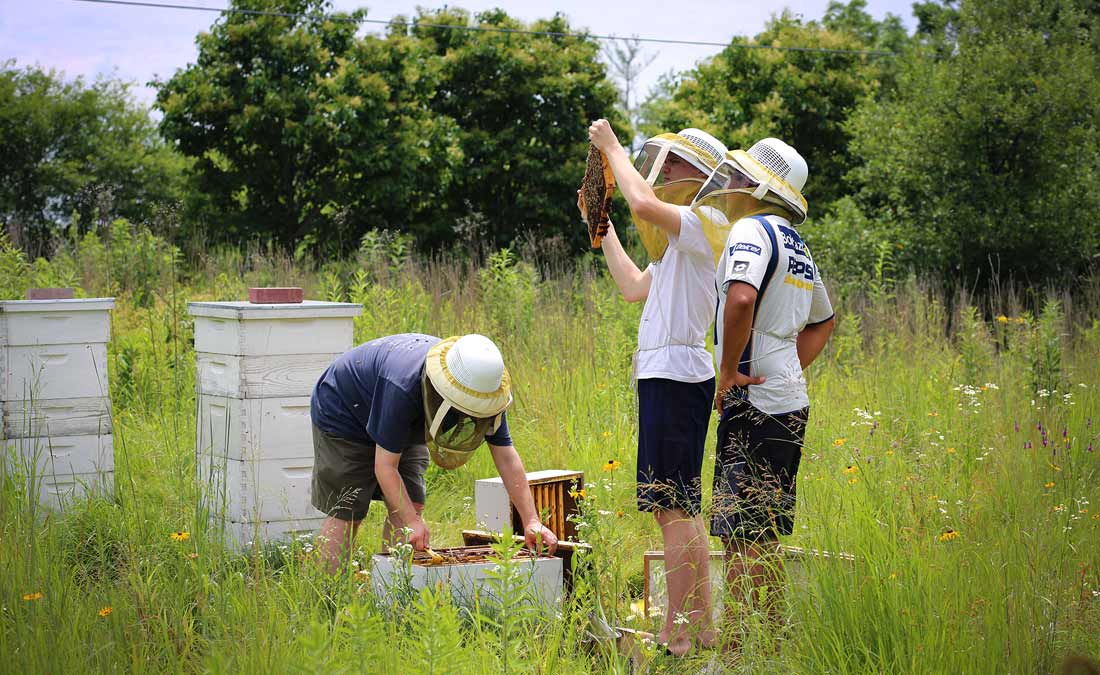 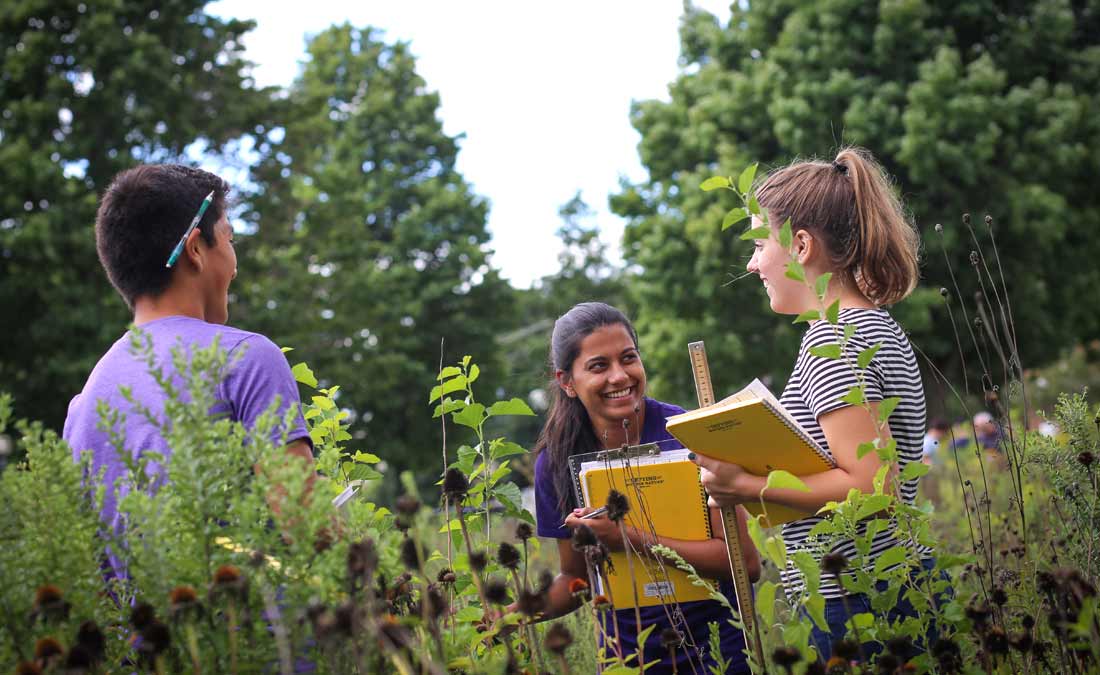