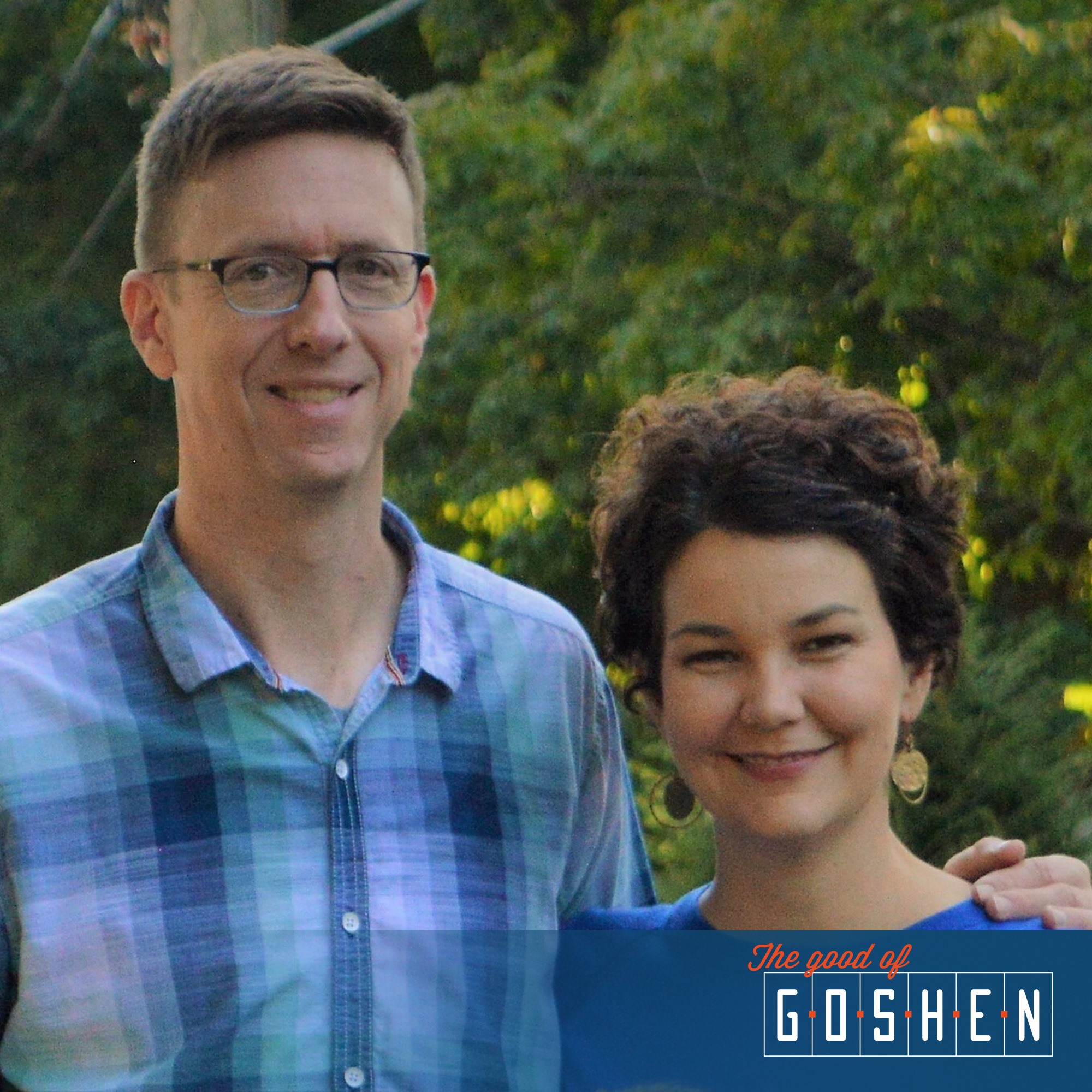 I grew up in Kansas but went to Goshen College. Then I lived in Atlanta for 20 years and met Kathleen there. My family has all moved to Goshen. We started a family in Atlanta, but wanted to be closer to my family so we moved here about three years ago. It’s changed a lot, but it’s been really great. (Nate)

It was definitely wanting to be near Nate’s family, but also for kind of a change of pace. We just wanted a smaller radius and a smaller town experience. (Kathleen)

I am a product designer for a software company, the same company I worked for in Atlanta. It’s been great to be able to do the same job remotely. I go into LightBox – Goshen. It’s kind of a co-working space, more of like a creative collective of people. We work out of the same space a few days a week, and also help each other with creative pursuits when it makes sense. (Nate)

About a year ago, I decided to go back to graduate school for a clinical mental health degree. My first internship was in the counseling services department at Goshen College. I’ll be counseling as an intern this whole next year at Oaklawn Psychiatric Center. (Kathleen)

I joined the mayor’s environmentally advisory council a couple of years ago and have been chair of that committee for some time. It’s been a great group to be a part of. We helped get the Department of Environmental Resiliency up and running. One of our initiatives is that we decided to create a kindergarten through sixth grade environmental education curriculum that is Goshen-based. We hired Paul Steury to write that, but I’ve also been working on that project, adding to the curriculum writing that he’s done. (Kathleen)

Living in a town with a thronging liberal arts college where a lot of people stick around afterward and pursue the arts and other fields makes the downtown community and other parts of life in Goshen so great.

Coming from Atlanta, we had some real concerns about wanting our children to have cultural experiences, and exposure to the arts and to people of different races and ethnicities. And yet what we found living here is that we get the luxury of a much smaller radius. It doesn’t take long to get anywhere, and yet there are all of these opportunities through the Community School of the Arts and the Performing Arts Series, and their school is around a 40 percent Spanish-speaking population. Our worries were not justified, as it turns out. We find it to be a culturally fascinating place to live.

We were surrounded by limitless possibilities in Atlanta, but because of the hassle of getting through traffic or finding child care, we often didn’t use a lot of them. Now we can walk to incredible music performances and we can walk to amazing trails and parks. We know our neighbors. We’re really well-connected with people around us, more so than being in Atlanta for a long time. Even though there are fewer things overall, the things that are here are really great. We’ve found it really easy to be actually more involved in arts and culture and having a good community of folks.

Writing, editing, and photography by Scott Weisser and Maddie Yost