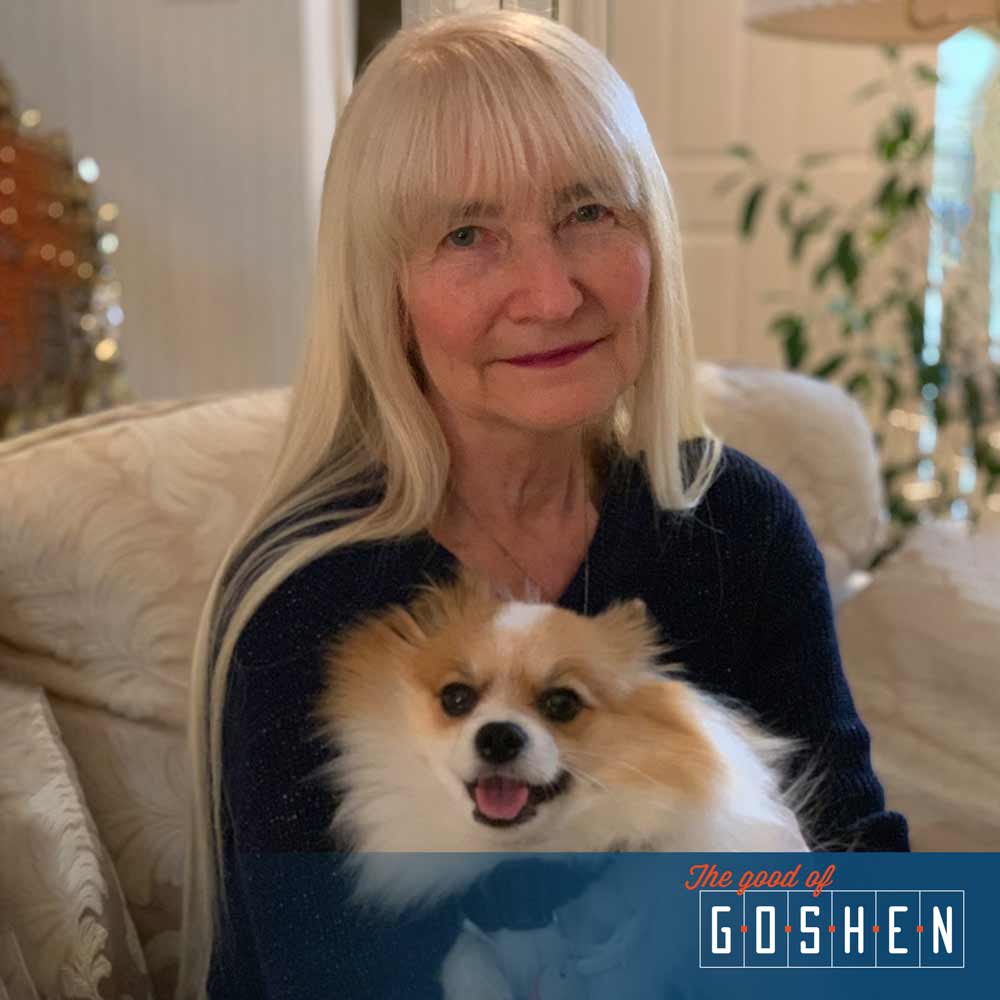 On Oct. 24, Goshen airport manager Randy Sharkey received a phone call. It was from Mayor Jeremy Stutsman, who described a unique situation.

Goshen resident Roxanne Dunn-Kiehl’s husband had been traveling back from Texas the previous day with his service dog. Roxanne had been communicating with her husband all that day by phone. However, there came a point when she was unable to reach him.

“She contacted Goshen police,” according to Sharkey. “And the police took her under their wings.”

The investigation uncovered a tragedy. Roxanne’s husband, Ernst “Ernie” Kiehl, had been found dead at the scene of a single-vehicle crash in Paxton, Ill. His service animal – a Pomeranian named Minnie Moo – survived the mishap.

Roxanne would have to make the drive to Illinois to pick up the dog. After everything she’d been through, that was cause for concern.

“With the bad news she’d had and the fact that she was tired from lack of sleep, we just didn’t want her making that drive,” Mayor Stutsman said.

Two Goshen police officers had volunteered to make the trip to Paxton. Stutsman wanted time to make some calls and look into other options.

The mayor wanted to help get Minnie Moo to Goshen. But how?

“We have a 501c3 organization at the airport called Friendship Flights Foundation that we started back in the mid-’90s,” Sharkey said. “It’s purpose is to help people in need who normally wouldn’t be able to afford private air transportation.”

“We have key pilots who have said they would help with Friendship Flights Foundation, certain pilots in our group that’s based here,” Garris said. “So I just started calling different pilots that I knew who I thought might be interested.”

Several pilots were unable to make the trip, and Garris was hitting a brick wall. She persisted. Finally, success: Pilot Nevin Hershberger was able to make the flight Oct. 25.

“He happened to be doing a trip to Chicago,” Garris said, “and then from Chicago he just went on down to Paxton and picked up the dog for us.”

Hershberger, an instructor with New Horizons Aviation at the Goshen airport, said the dog handled the flight surprisingly well.

“I was a little apprehensive, I guess,” he said. “I was just imagining this dog going crazy in the airplane, and I was going to be by myself, so there wouldn’t be anyone to really take care of the dog. But it ended up going really well. Every time I looked back, it was just kind of sitting there looking up at me. It seemed calm and pretty content the entire flight.”

Hershberger was happy to be part of a helpful process.

“I’ve done a fair amount of flying, and I’ve never really had the opportunity to help anybody out like this,” he said. “It felt good that I could take my skills – what I do for a living – and help somebody out in that way.” 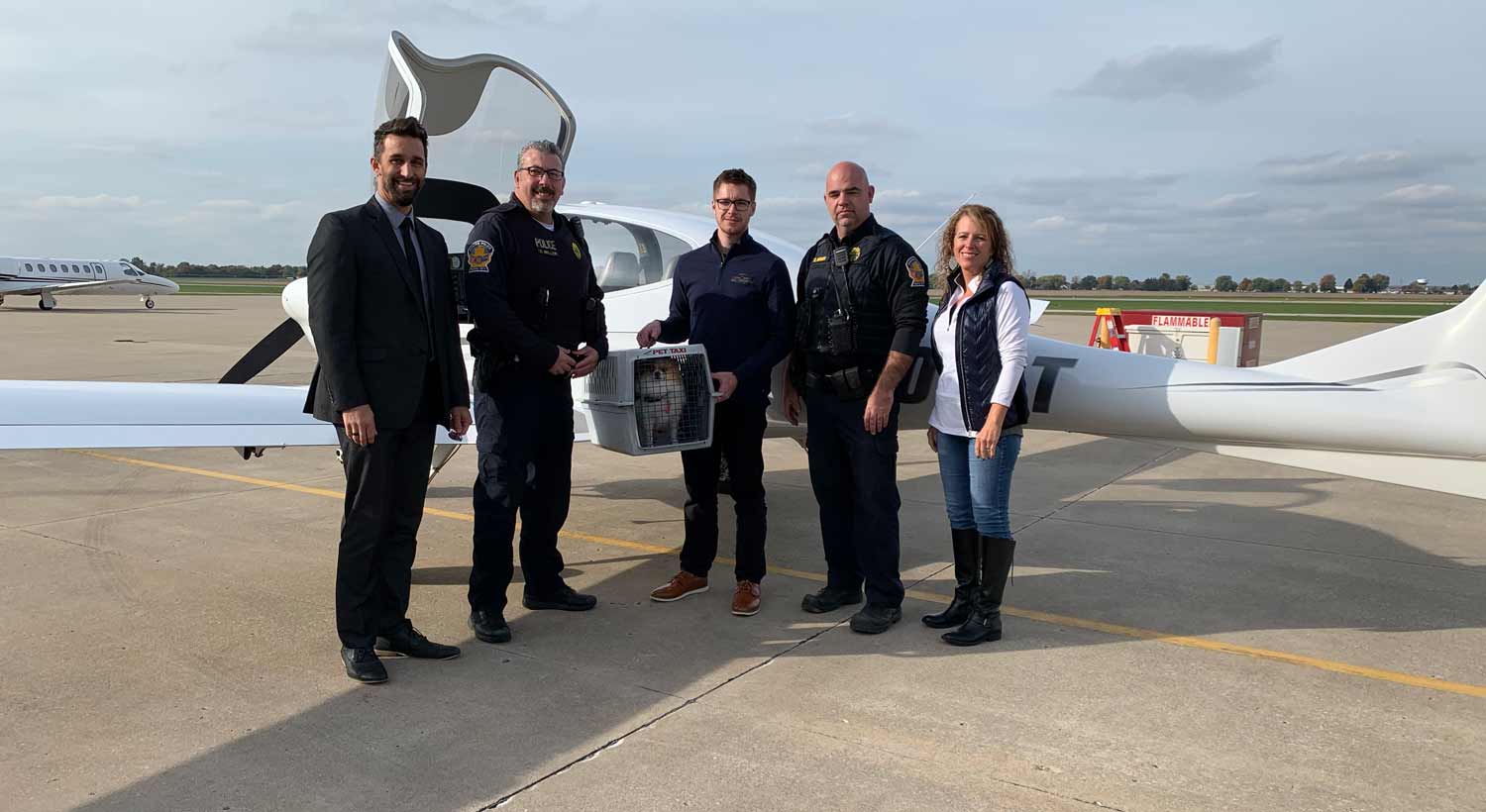 Several pilots were unable to make the trip, and Garris was hitting a brick wall. She persisted. Finally, success: Pilot Nevin Hershberger was able to make the flight Oct. 25.
Photo provided.

Outside Roxanne Dunn-Kiehl’s Goshen home, an early snowfall covers the ground and the roads are getting bad. Inside, Roxanne is talking about the husband she lost not quite three weeks ago.

The two met while Roxanne was stationed at Fort Hood. She’d gone to his Toyota dealership looking for a car. They were married on Sept. 5, 2014.

Roxanne is talking about her husband on Veterans Day, which is fitting: Ernie was a Vietnam veteran, serving in the U.S. Army from 1968 to ’72.

“He’d been involved in explosions, so he was 100 percent disabled,” she said. “…He had metal they couldn’t take out.” Ernie was also a critical heart patient and suffered cluster migraines.

“He knew he was going to pass and decided to settle down,” Roxanne said. “He was just wrapping up selling his house in Texas, and was on his way here to live permanently. …My husband was probably going to pass within the next couple of years. It just happened sooner than what we thought.”

Ernie was the one who found Minnie Moo, who was born in late 2015.

“Ernie was planning his death, and bought her to be my support when he was gone,” Roxanne said. “…He trained her for me, preparing for his death. So she is now my support dog.”

Additionally, Ernie was training Mini Moo to encourage veterans when he went to the VA hospital, and also to alert him if he started to have a heart attack.

“What my husband would probably want is for me is to take her around and have her do what she was doing for the vets in the VA hospital,” Roxanne said.

“That meant so much, what he (Stutsman) did,” she said. “It’s one of the kindest things that anyone ever did for me. …All these people just made such a difference for me.”

As she copes with the loss of her husband, Roxanne has a canine companion to help make a difference, too.

“She’s a sweetie,” she said of Minnie Moo. “She loves to cheer people up. When I start crying, she’ll start giving me kisses.”

A group of people worked together to make sure Minnie Moo is where she needs to be. Mayor Stutsman has a word for that effort: amazing.

“Everyone who was involved in this, it was all Goshen people who were willing to go to this extent, and all they knew was that this person lived in Goshen,” he said. “That’s our community. We’re a giving community that likes to take care of each other. It means a tremendous amount to me that I live in a community that would be willing to do something like this.”