Andrew Kauffman and Shelley Kauffman • The Good of Goshen 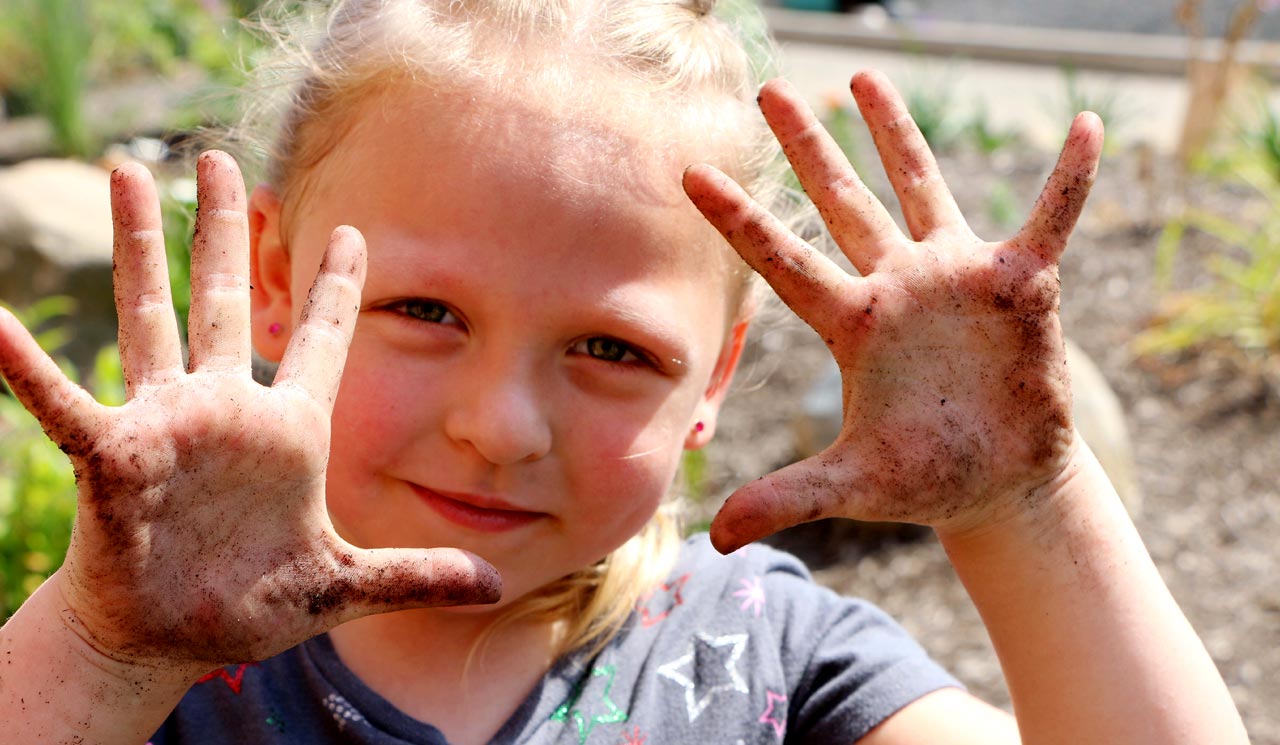 This fall, expectant Goshen elementary students will harvest potatoes they planted from seed early last spring. Come Thanksgiving, they’ll eat dishes made with vegetables they grew themselves. Other students will, for the first time in their lives, learn how to use rakes, shovels, and pitchforks. Others will help plant a flower garden, or learn to how to plant bulbs in fresh soil.

The students’ new gardening knowledge is thanks to two very passionate teachers in the Goshen School System: Andrew Kauffman (Goshen College ‘04), a teacher at Chandler Elementary School, and Shelley Kauffman (Goshen College ‘04), a teacher at Waterford Elementary School. Both Andrew and Shelley were instrumental in bringing gardening education to their schools (they also happen to be related – Shelley is married to Andrew’s twin brother). Andrew and Shelley share deep interest in teaching children about the importance of caring for the environment, stemming from a general love of the outdoors.

“I’ve always loved being outside,” said Andrew. “My parents had a big garden when we were growing up. Now, I want my students to grow up with that – I want them to be aware of the amazing world around them.”

So Andrew made it happen. Last school year, Andrew asked the Goshen Schools central office for permission to transform an unused patch of bare ground on the Chandler Elementary playground into a flower garden.

“I noticed that the playground didn’t have much space for kids to experience grass, flowers, and plants,” said Andrew.

School leaders also recognized the need, so Andrew’s proposal was soon accepted. Three weeks after Andrew made the initial request, the garden was created. Planning and implementing the garden was made easier with overwhelming support from the PTO and volunteers. On the day the garden was put in, kindergartners planted succulents, parents and teachers helped haul in soil and lay mulch, grade schoolers helped water, even councilman Jeremy Stutsman showed up to move in 200 pound rocks.

“It looks so much different than it did before,” said Andrew. “It was an asphalt jungle, and now it’s a garden where kids can interact with their surroundings.”

“We wouldn’t have been able to put it in without everyone’s help,” he added. “It was a whole school effort.”

Shelley also began the process of adding a garden to Waterford’s playground last year. She, along with other teachers and eager students, had the idea to plant vegetable garden. That way her students could learn grow food, prepare it, and inevitably, appreciate the hard work that goes into food production.

Shelley presented her idea to the school board, and they were thrilled.

“[The school board] was so excited to hear about it and was helpful in getting it started,” said Shelley. “People just donated things like plants and tires; business owners gave us discounts; parents and teachers volunteered to help water in the summer. Getting community involved was easy.”

Shelley’s third grade class helped install the garden last school year. It’s not a typical plot, it’s an elevated garden, made of straw bales and stacked tires. Shelley says that they decided on a straw bale garden because it would be easily removable and, when the garden is finished for the year, the straw can be composted. The tire gardens make harvesting potatoes easier; you need only take the tires away — no need to dig them out with a shovel.

“Both of these structures have allowed students to see the plant life cycle,” said Shelley.

Shelley helped the students start seeds in pots in the classroom, so they could reflect on how food grows. Seeds were started in pots in classrooms, then taken to the garden.

“I’m so glad the kids have seen this process, to see how things grow,” said Shelley. “When they come back in the fall, they’ll see full grown plants, monarch and swallowtail butterflies — even dragonflies — surrounding the garden.” 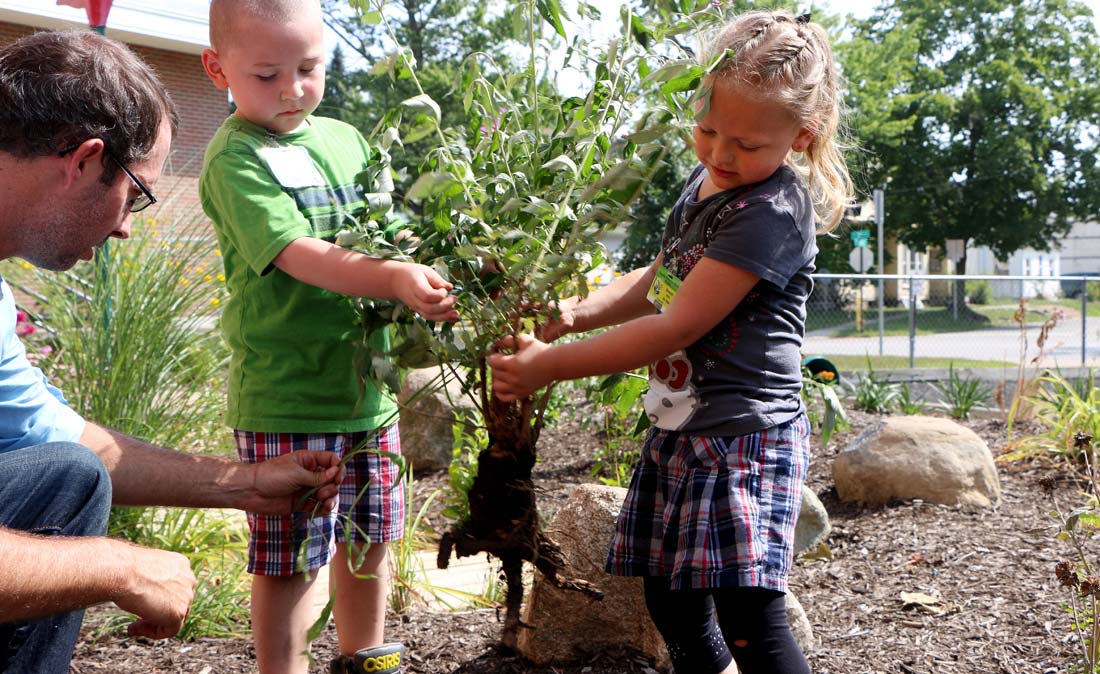 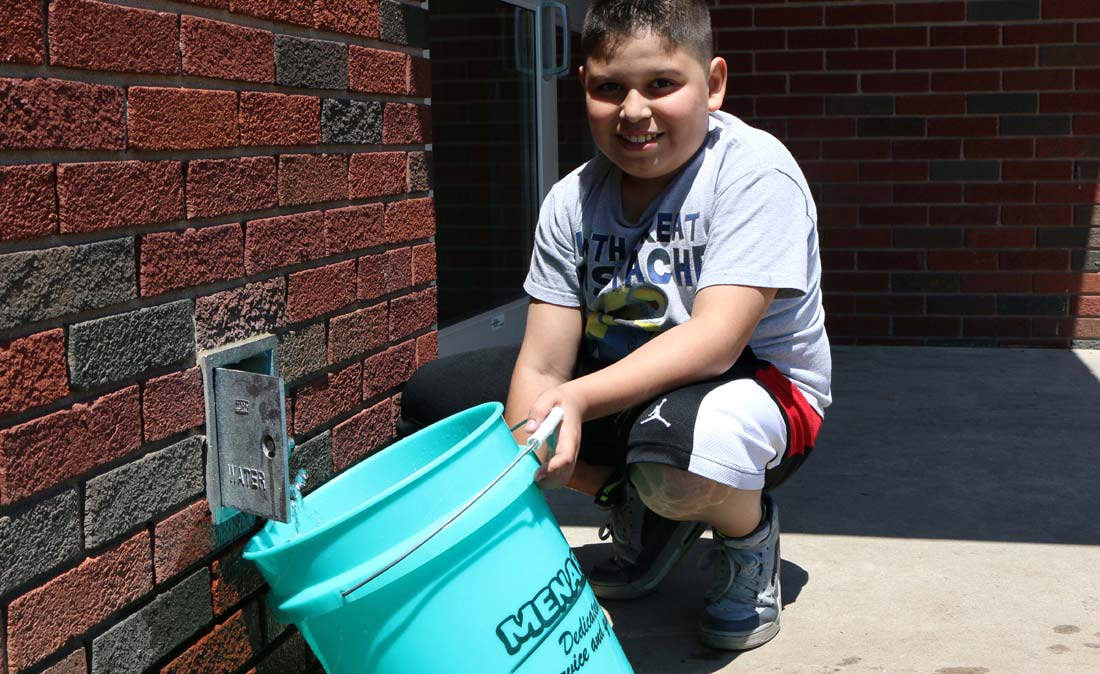 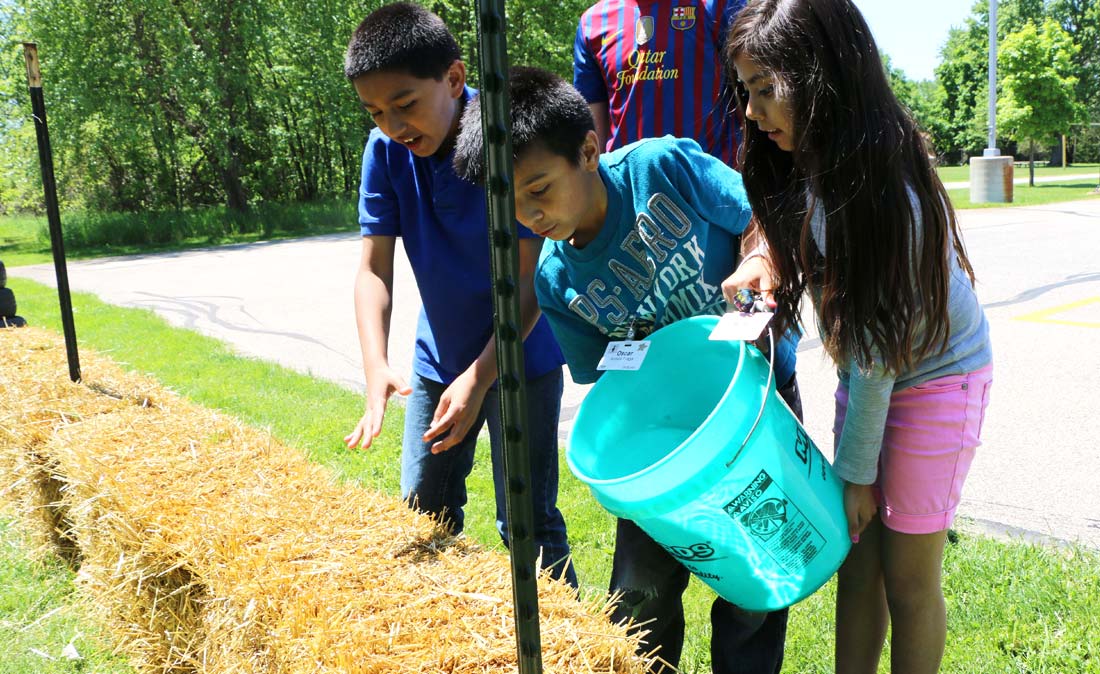 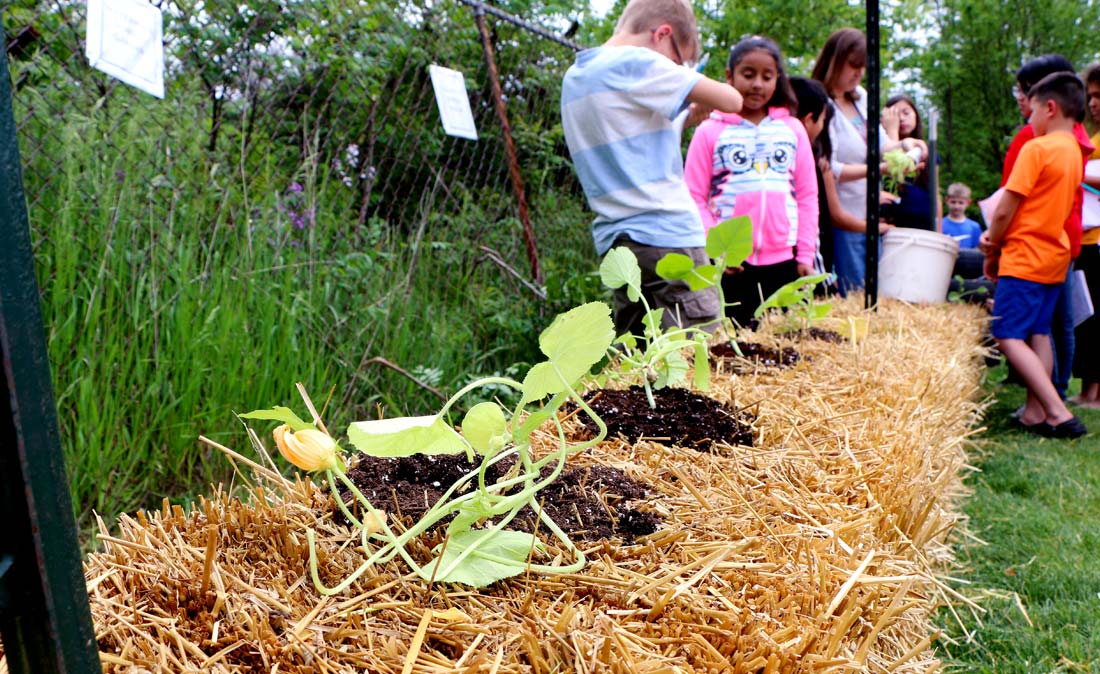 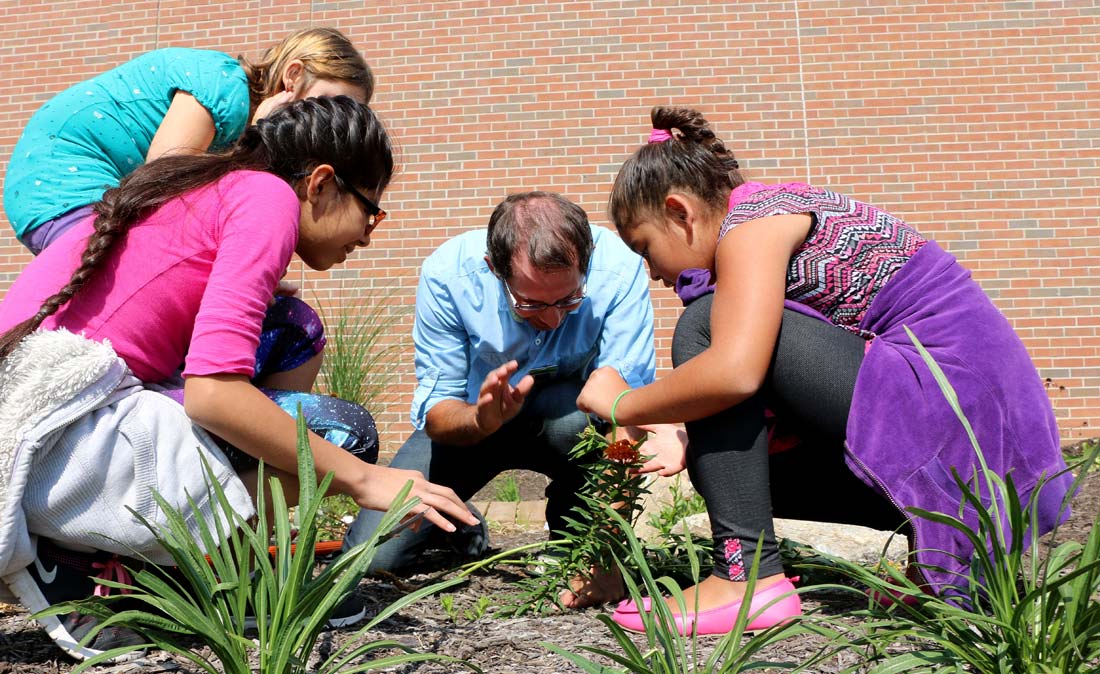 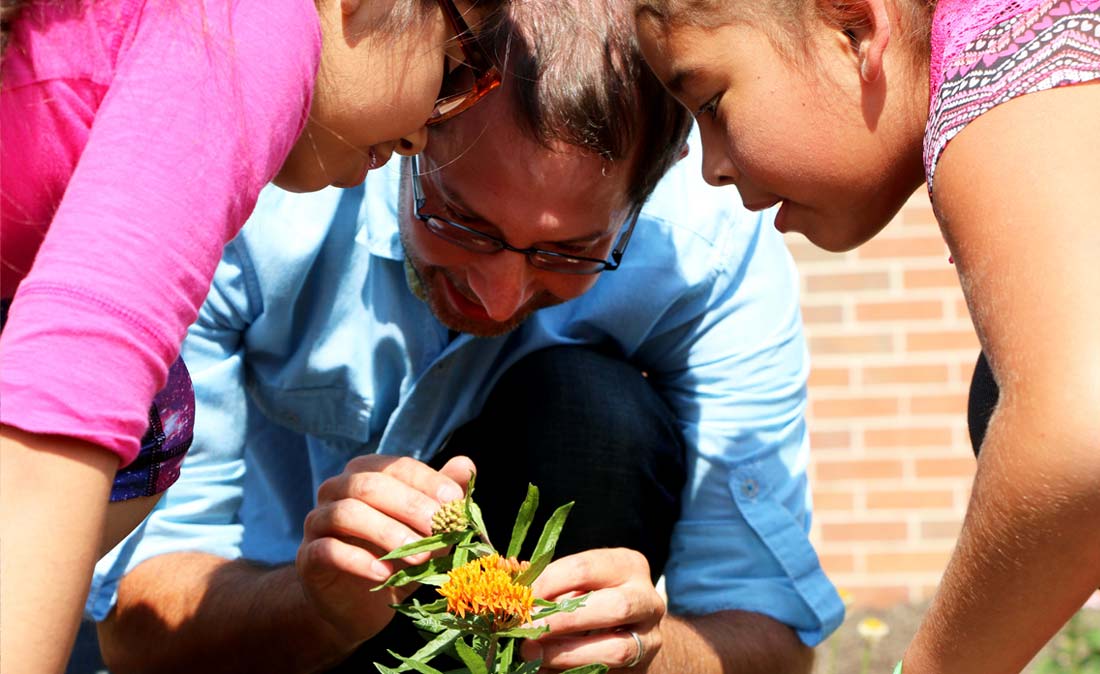 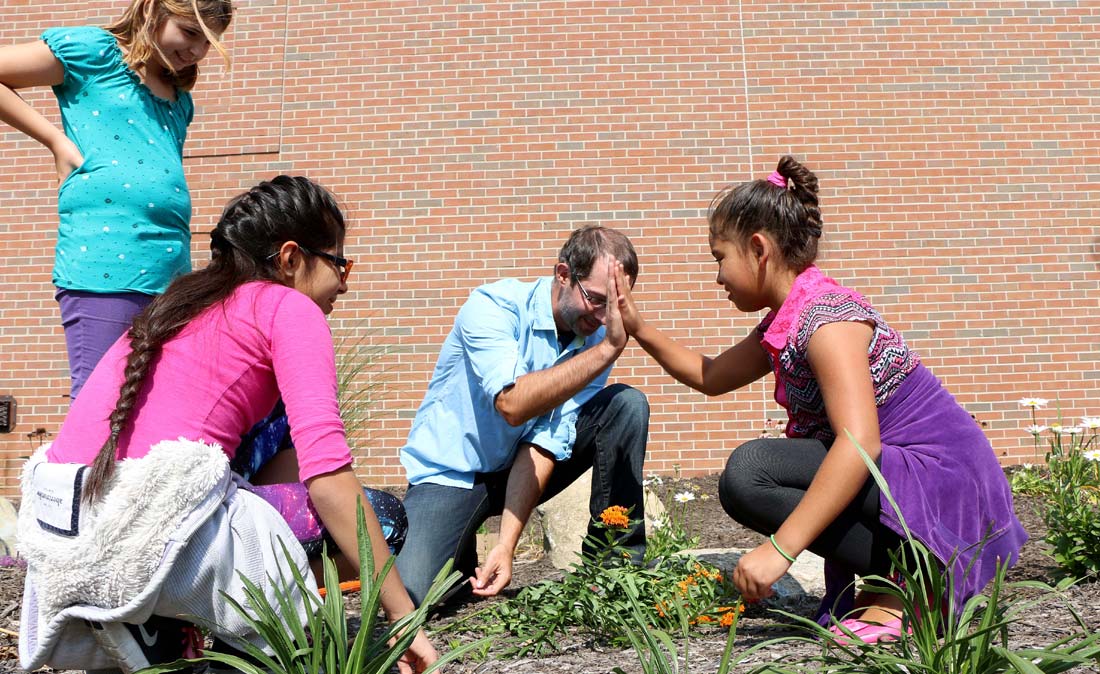 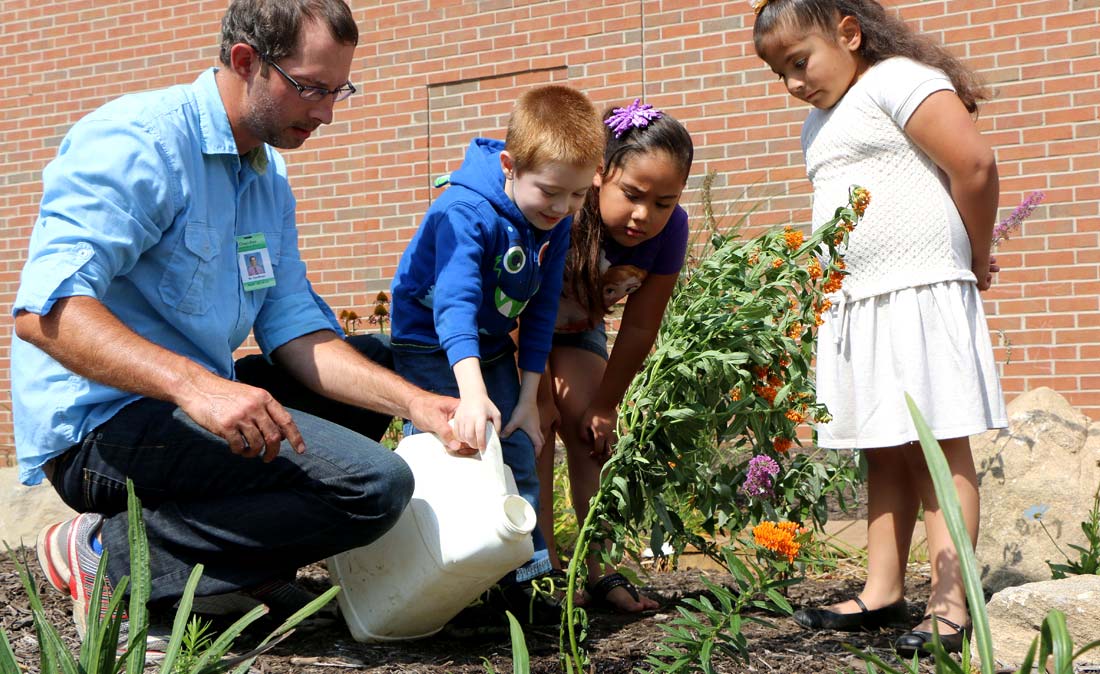 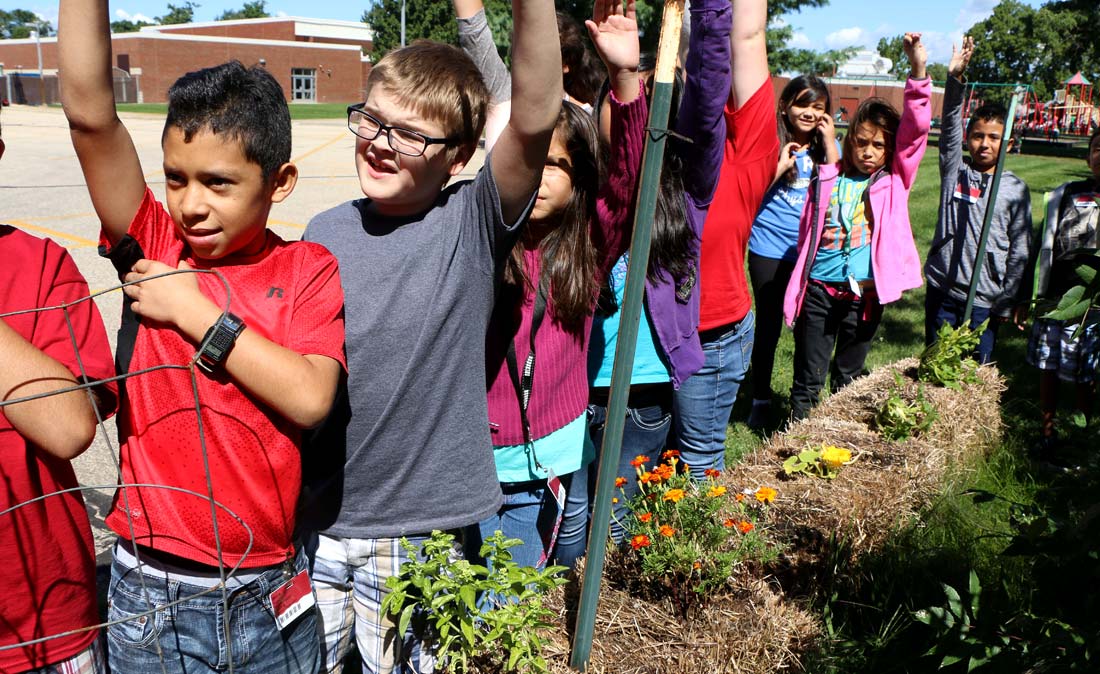 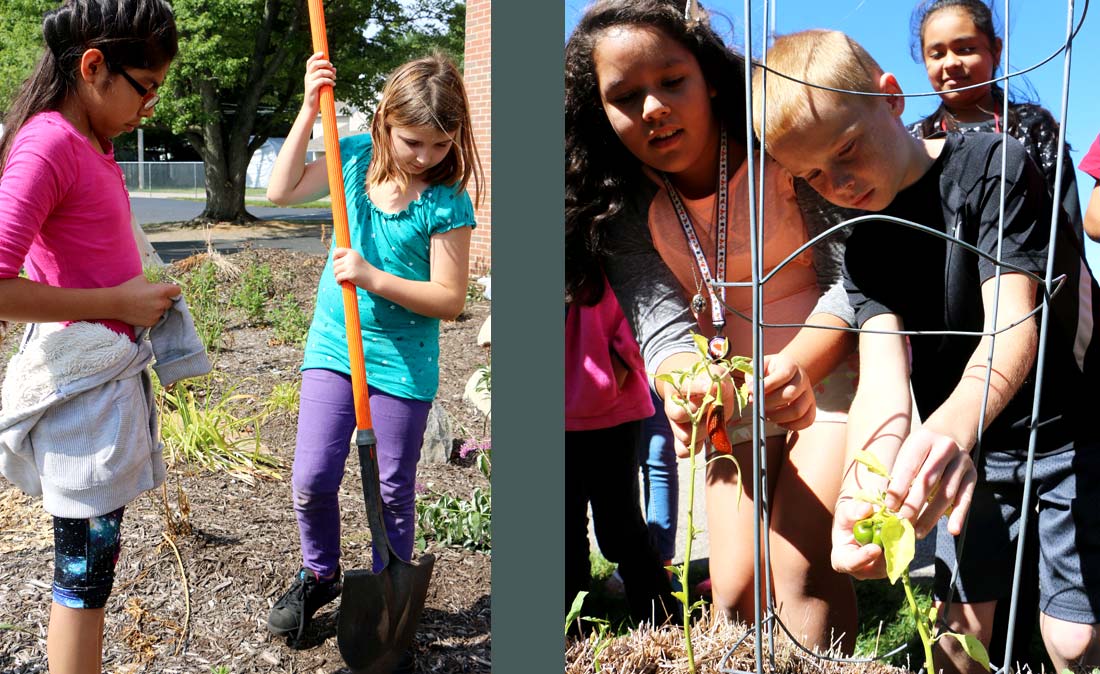 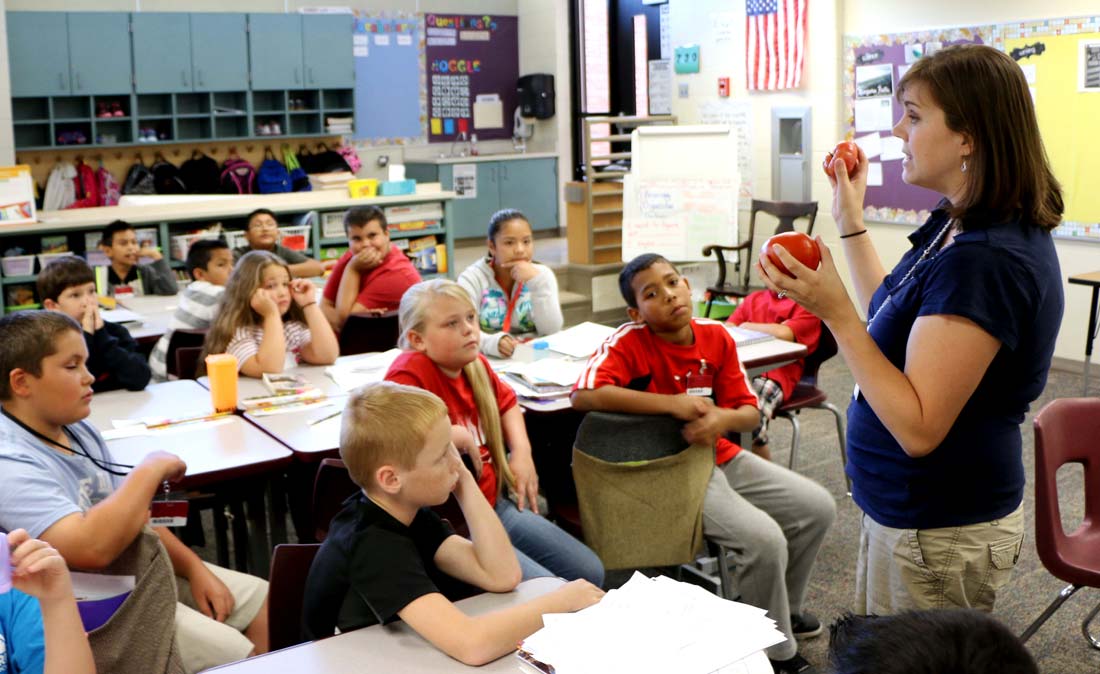 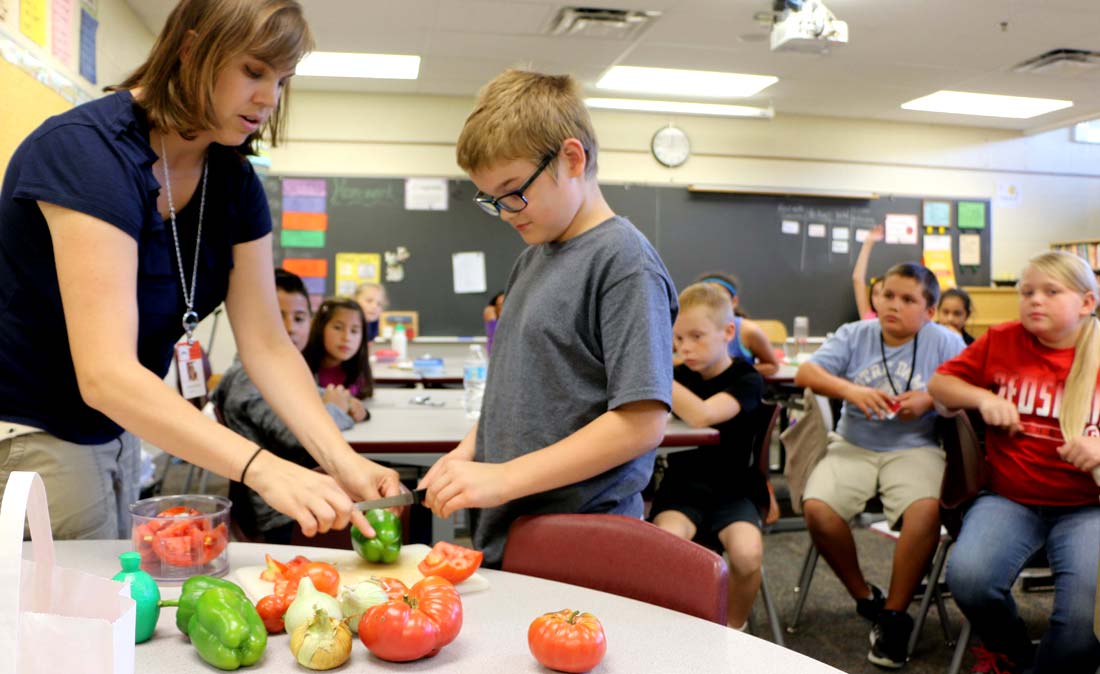 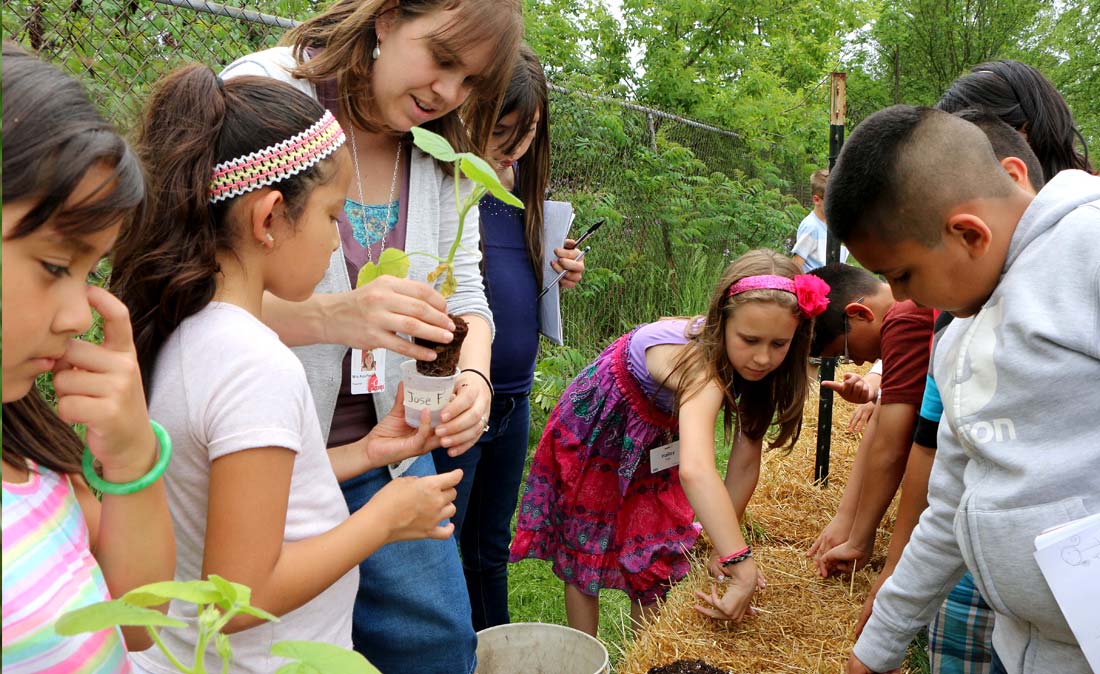 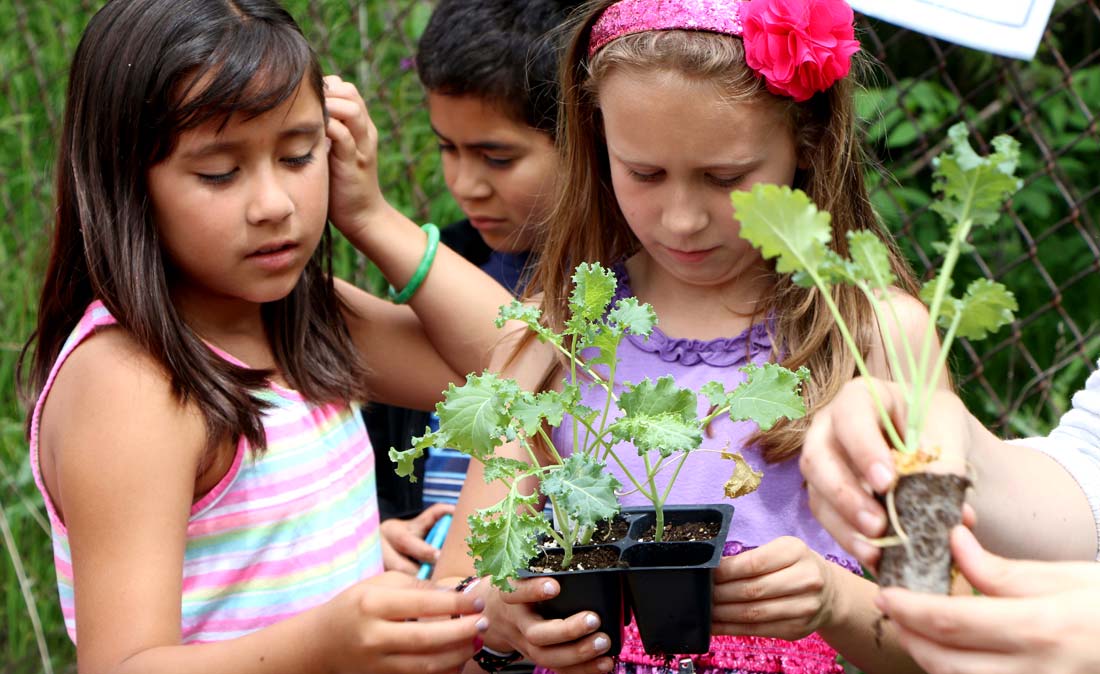 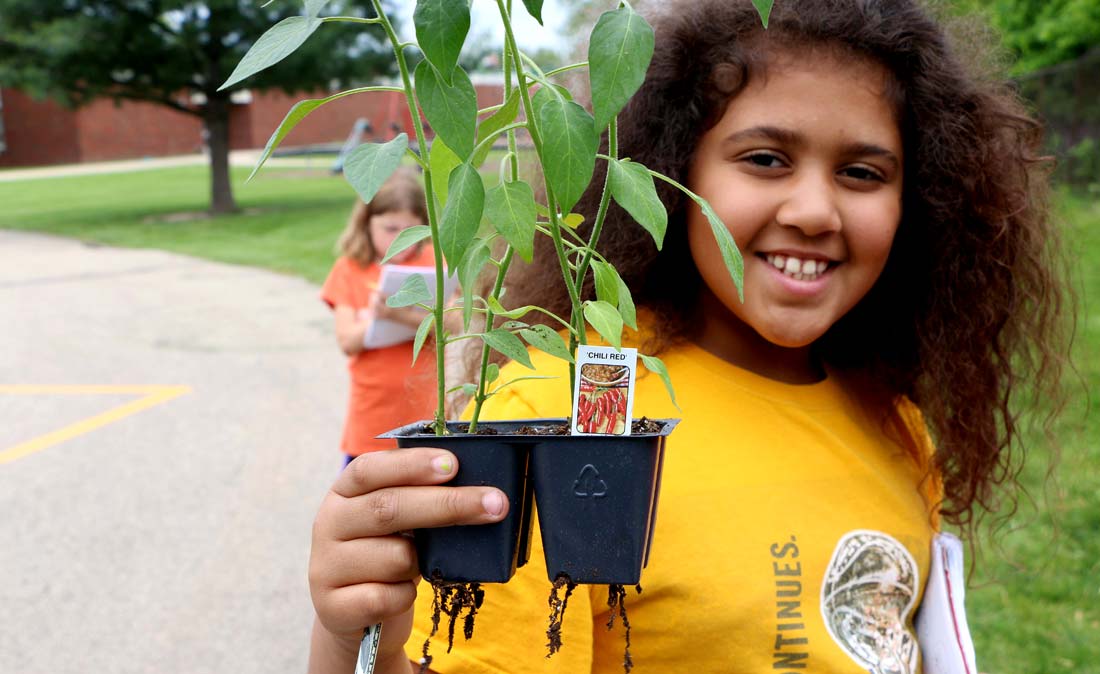 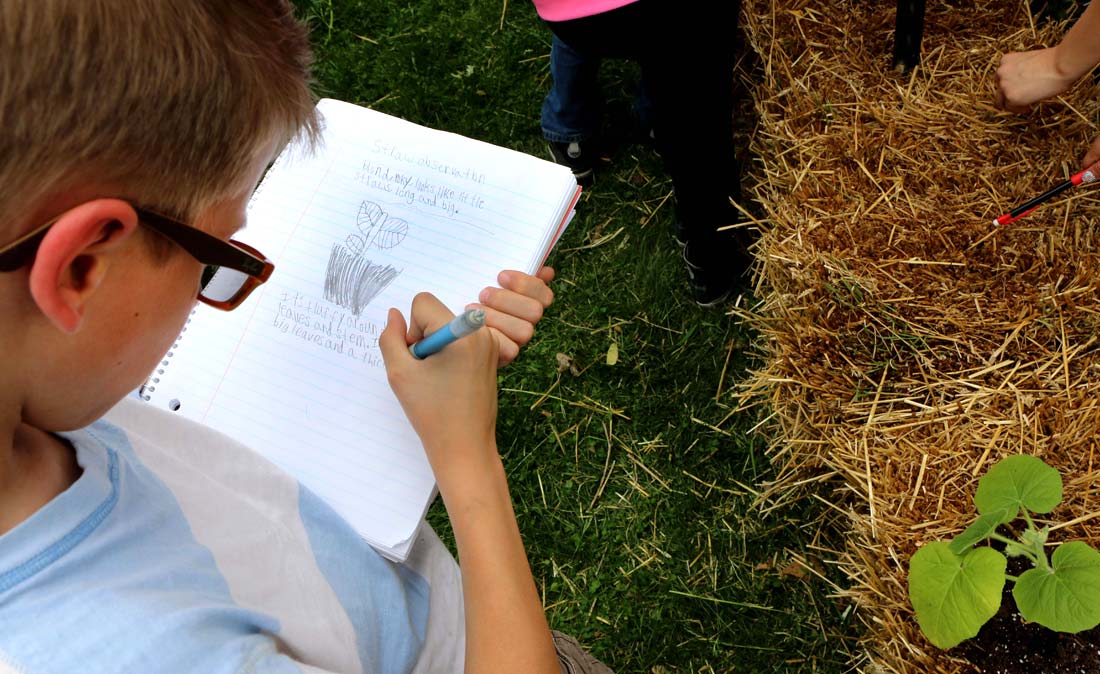 Though the Waterford and Chandler projects are focused on different types of gardening, both are led by teachers who believe teaching kids about gardening is important for more than just teaching tactile skills. It helps, they say, instill a love of being outdoors.

“We want to teach them not to say ‘ew’ or ‘gross’ when they see a bug – not to squish it right away,” said Andrew. “We want them to know that that bug has a big impact on their world. Those worms are going to help our flowers grow.”

Shelley agreed, “Many students have no idea where food comes from – they think it comes from the store. So many kids don’t go outside, they are used to staying inside and playing video games. But this project gives them a chance to be involved with the environment.”

As the summer winds down, ripe green peppers, bright herbs, and healthy potato plants are in ready to be picked from the rich soil. Soon, students will rush outside for recess, straight to their gardens, to harvest the fruits of their labor.

“They have so much energy when they work in the garden,” said Shelley, laughing. “During recess, everyone wants to help in the garden. They’re just dying to carry buckets of water and get their hands dirty. They’re excited to get involved in something.” 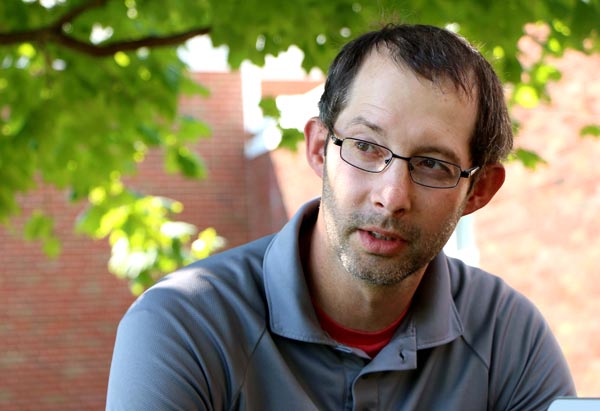 “I want my students to grow up with that – I want them to be aware of the amazing world around them.” 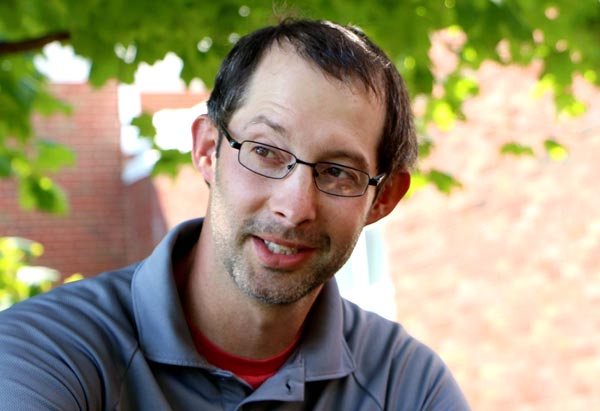 “We want to teach them not to say ‘ew’ or ‘gross’ when they see a bug – and not to squish it right away.” 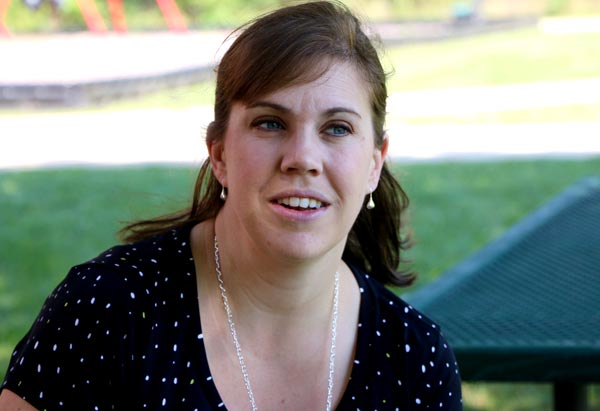 “Getting community involved was easy.” 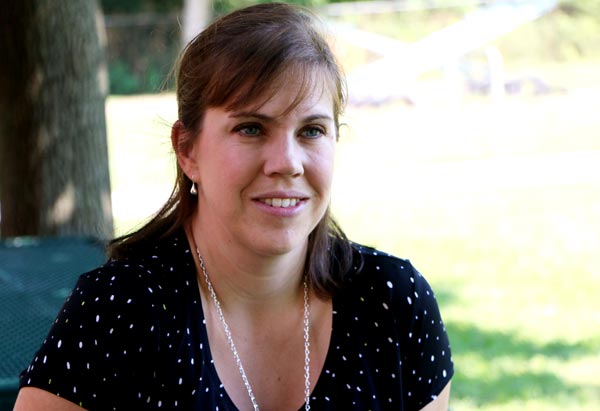 “I’m so glad the kids have seen this process to learn how things grow.”