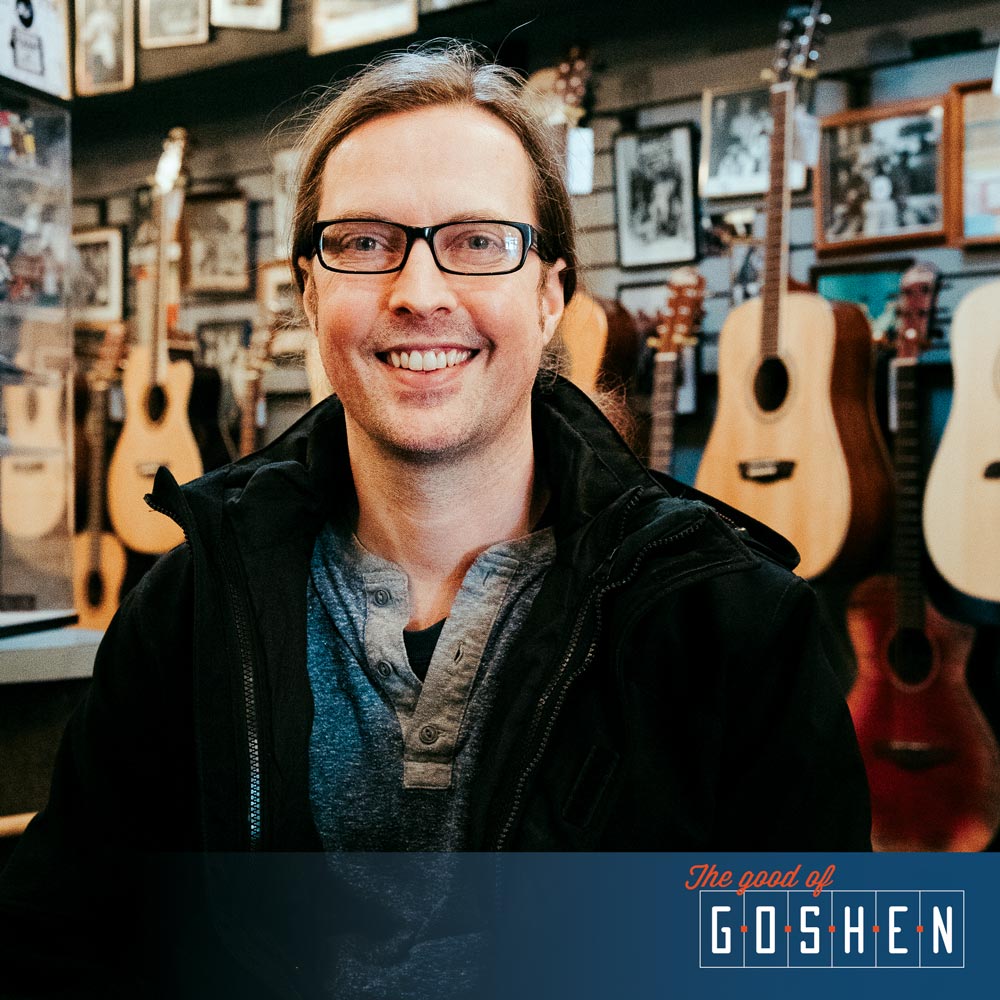 My family moved here from Chicago when I was a freshman. Goshen 20 years ago was kind of lame, so I thought I’d be here for only two or three years. However, I bought TG Music, got married, had kids, and stayed.

Starting in 2004 I ran TG Music in the upstairs of what is now the guitar store. In 2009 I started working at Indiana University South Bend and taught jazz guitar there for 10 years. I’ve stepped away from it for the time being, but would eventually like to return to it. I’d also like to eventually start another band!

In 2004-05, Jeremy Stutzman and Dave Pottinger were really working on changing the downtown. I mean, before that the original The Electric Brew used to be an Arby’s, and there wasn’t even a coffee shop. Downtown used to be rundown and strange, but with Dave’s it has changed really fast. People who had left Goshen started coming back, and millennials now think Goshen is pretty cool.

These days, my time is split between three places: TG Music, Mimsy Toys and Ignition Music.

Small music stores like TG are challenging. On the plus side, there are a lot of people who are dedicated to TG and try to get things from here as opposed to another vendor. That’s what keeps us open.

At Ignition, the show experience is unique and in such an intimate venue. How I listen or experience music is super important to me, and Ignition is the ideal space for it.

Julie Hershberger is my partner at Ignition. I book all the performers, and she controls the vinyl LP side of it. We’d eventually like to purchase Ignition [the building] and invest in ways to make it accessible to more local groups in addition to the touring groups that already perform there.

I wasn’t even planning on starting Mimsy’s Toys, but that happened in 2018. We had in the back of TG so we figured we might as well start it back there. My Mimsy partner is Meg Paul, who runs the day to day operations.

Despite the challenges, I love being in Goshen and being hyper-focused on downtown. As far as an Indiana community, I think Goshen is kind of the progressive Mecca for the whole area. There’s just something about it. I’m so excited when there are new businesses downtown in Goshen!