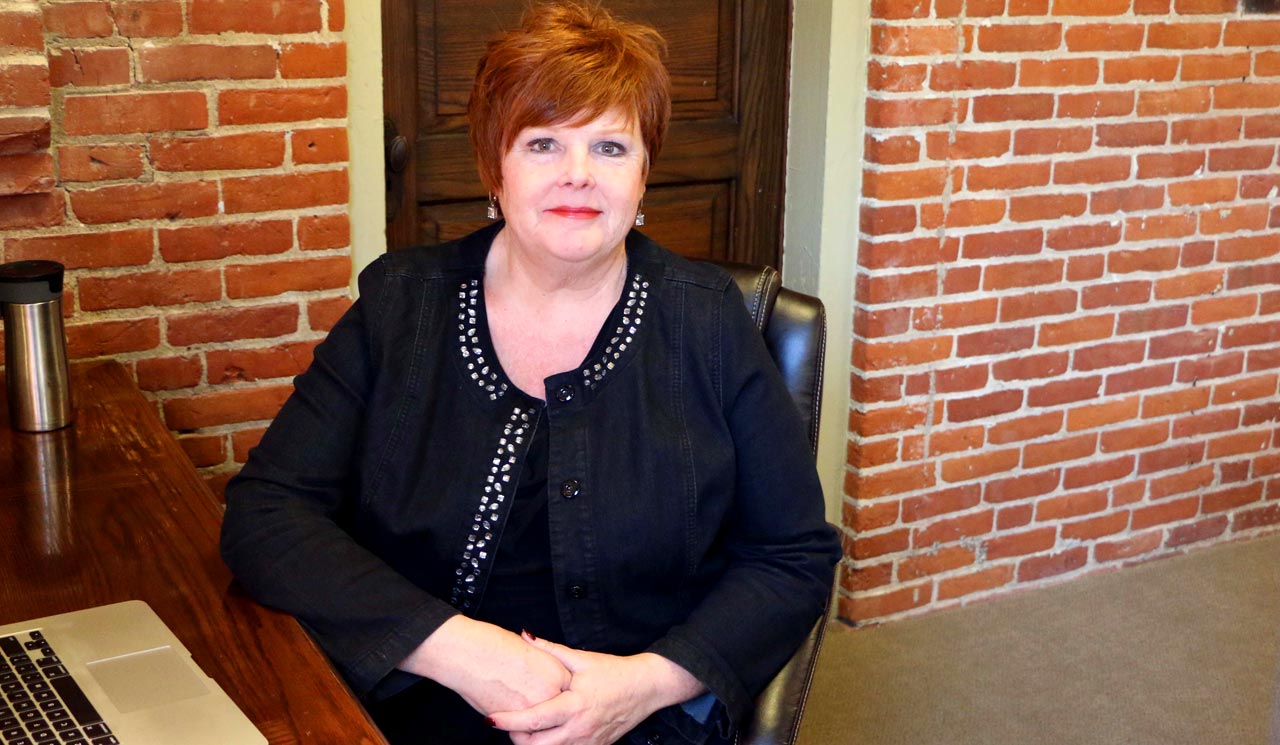 You may have noticed that things are looking a little different on 3rd Street, the road that curves lengthwise around Main Street in downtown Goshen. What was once overrun with creeping vines and bygone bushes is now a refurbished office building, with a sign out front reading its own address: “313 on 3rd.”

So what’s going on in the resurrected old space? Building owner Katharine Schrock explains in this submitted story.

My husband, JC Schrock, and I purchased the historic home last year, and have since transformed the dilapidated structure into what is now a holistic health center, which opened in November 2015.

In the summer of 2014, when JC was doing an aerial search in conjunction with his work on the Hawks building with La Casa, Inc. and DJ Construction, his attention was drawn to a historic home just east of an old factory (now The Hawks building) and wondered what the city’s plans for it were. When he called Mark Brinson, head of the redevelopment commission, to inquire, Brinson replied, “Funny you should ask me about that. The city is getting ready to announce a RFP (request for proposal) to bid for the historic home.”

The timing was perfect. We had been looking for the last six months for a building to move my business into, and we wanted something we could invest in during our retirement years.

JC learned that the city had purchased it eight years ago, and the city hoped to save the home due to its historic nature. The city was inviting anyone to submit a formal proposal to purchase it from the city. However, there was a complicated bidding process and a detailed outline to complete in order to be considered.

When we looked through the home, which had been left vacant for eight years, we saw a diamond in the rough. The outside of the home was in very bad shape: Copper pipes and electrical wires had been stolen. But the inside had the original wood trim, chandeliers, and sconces. It was then that we began to form a vision of what it could be.

After bidding procedures and interviews, we were thrilled to learn we had been chosen. This was an answer to prayer, as we had been looking for a new location for my counseling business and had dreamed for years of having a location which would include services for mind, body, and spirit. I had also dreamed of having a forum to host workshops, and conferences related to holistic health. Luckily, we had many contacts over the years who were ready, willing, and able to help.

In October 2014, we became the proud owners of 313 S. 3rd Street. At that time, we could barely see the front porch or the south end of the house due to overgrowth. The old, rickety stairway to a long-forsaken apartment was barely standing. There were many rotting windows. We noticed a significant roof leak that had damaged the vintage cornice work. However, we both looked beyond what was and began to visualize what could be.

JC and I started to think about where offices and waiting rooms could be — as well as a conference room for workshops and seminars. We also tried to imagine what the gutted upstairs apartment might look like with offices, waiting area, and restroom. It was in such rough shape, we knew it would be a challenge. 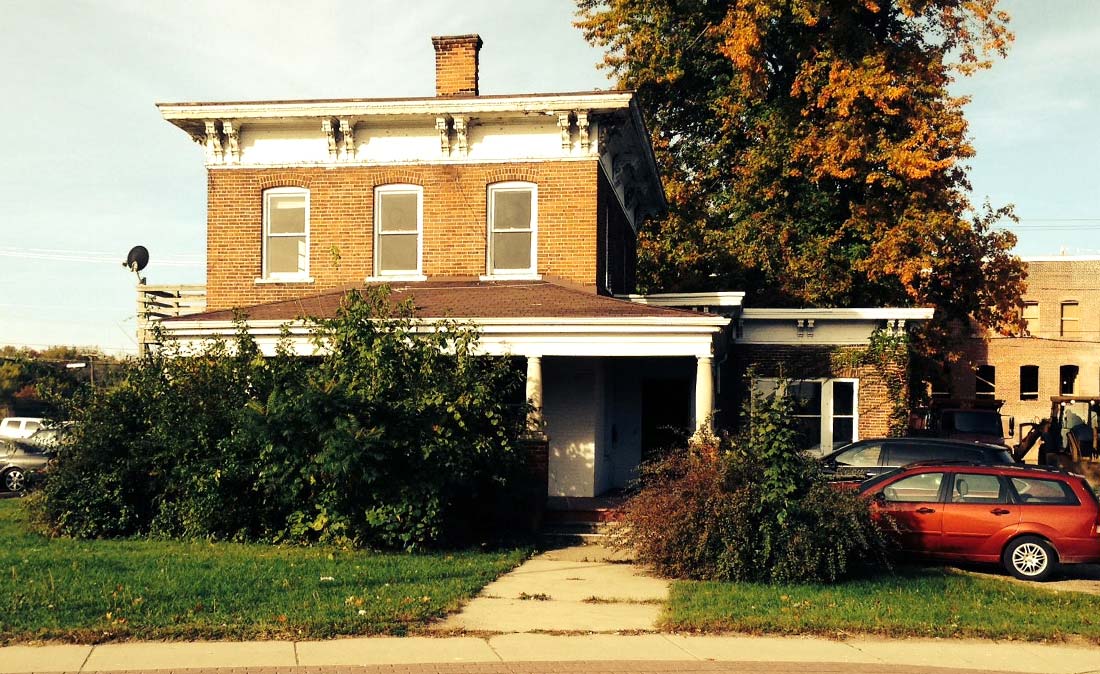 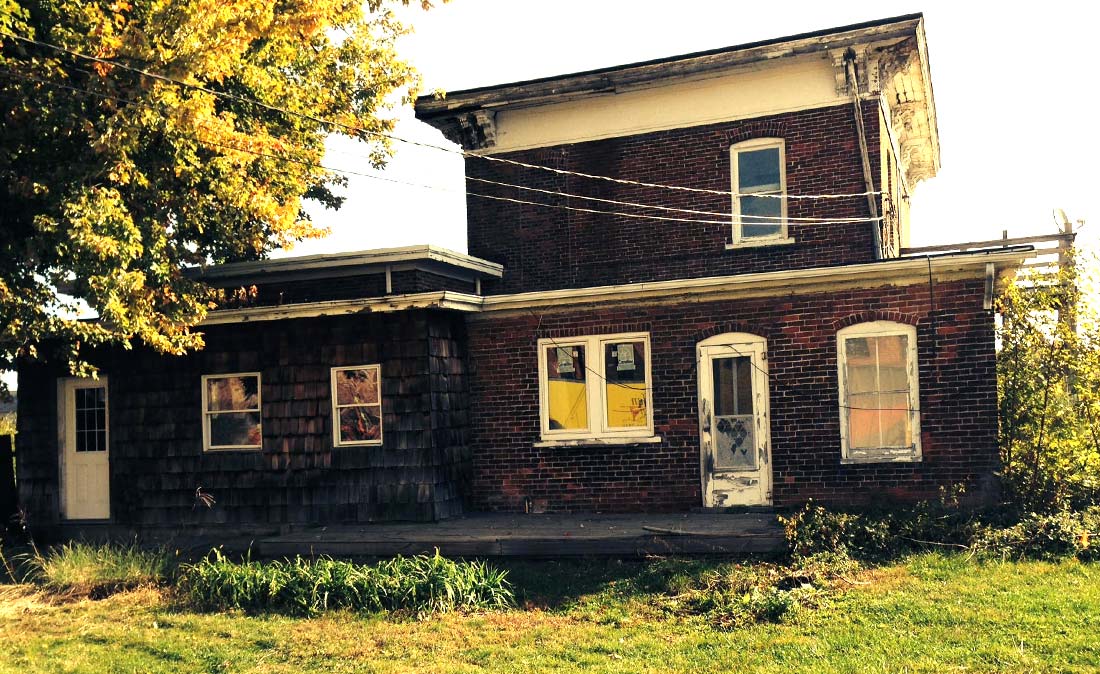 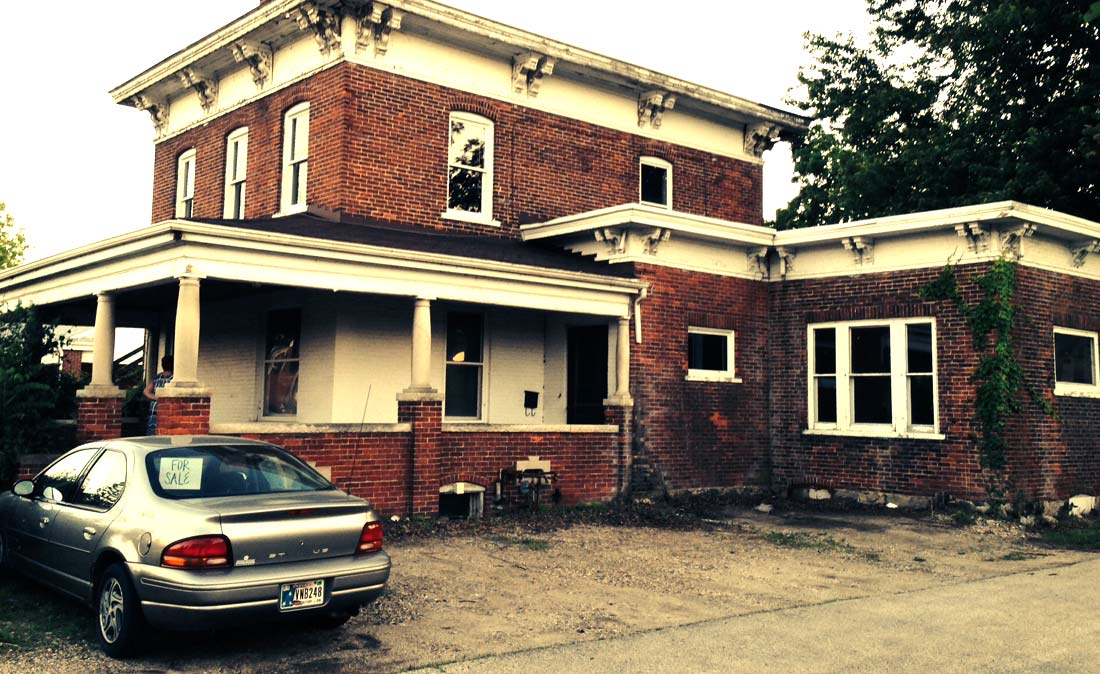 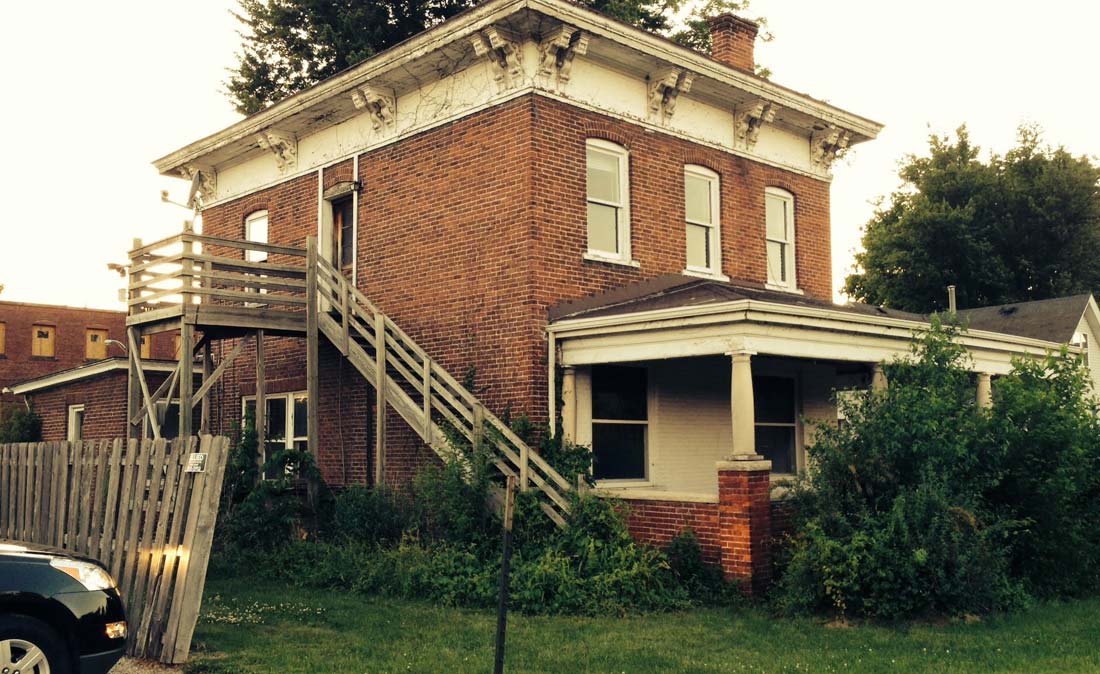 JC worked long hours designing the renovation and submitted his formal plans to the State of Indiana in early January of 2015. Shortly thereafter, the demolition began. There were some changes to the main structure to accommodate waiting rooms and offices, but we tried to stay true to the vintage and design of the original home. We rebuilt the stairway and began to rough in offices and on the main level. We also renovated bathrooms, along with five offices, four waiting rooms, a kitchen/break room and conference room. I looked long and hard to find brick to match the main home for their addition and even added decorative corbels to the lower roof structure to follow suit with the original four-square home. With JC’s experience with construction and his eye for detail, the project was done with exceptional care and design.

There were a few snags along the way and extra expenses we did not expect. Replacing the entire upper roof, re-building the front porch, and having to completely demolish the kitchen/south office areas were major undertakings. We decided to purchase historic brick from Jefferson Street to line their parking lot.

Our good friends Gwen and Dean Preheim-Bartel, master gardeners, designed the grounds, spending many hours planting flowers, bushes, trees, and bulbs to create the warm and inviting landscape. The south side of the house has a rose garden along with a weeping cherry and the north side has an English garden with a bird bath. We are both looking forward watching the spring, summer, and fall plantings come into full bloom. We are hoping it will feel warm and welcoming as you park and enter the building. 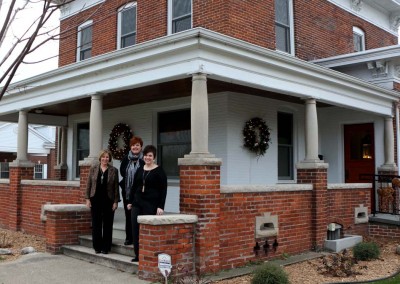 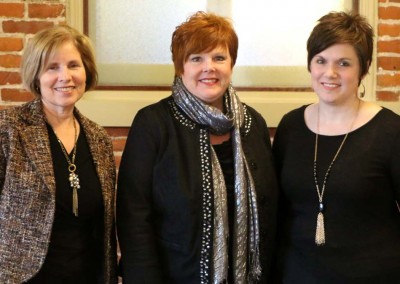 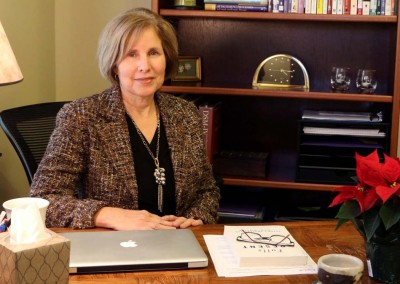 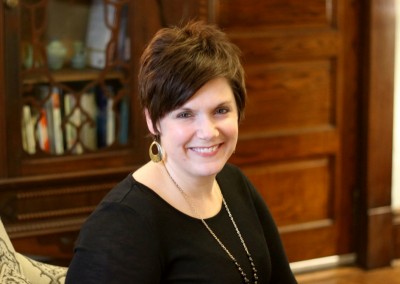 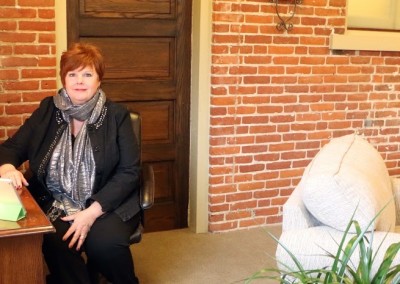 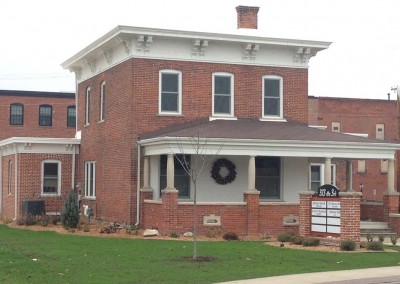 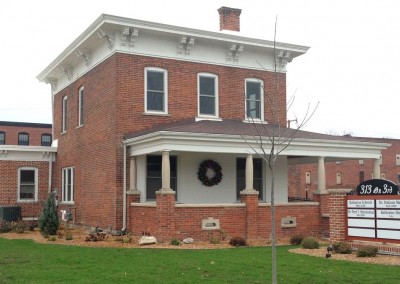 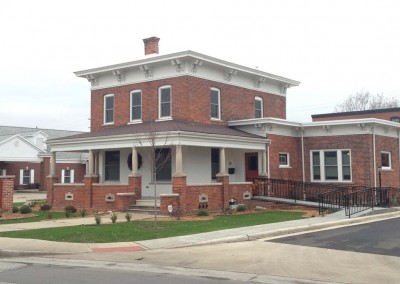 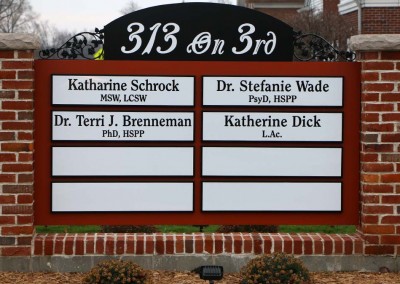 We are proud to have the practices of Dr. Stefanie Wade and Dr. Terri Brenneman join us, and are excited to announce that Katherine Dick, a well-known acupuncturist in the area, will be offering community acupuncture on a rotating six-week schedule. We, along with Wade, Brenneman, and Dick, are hosting an Open House during an upcoming First Fridays to showcase how we have transformed this vintage home into a new business for downtown Goshen.

We could never have completed this beautiful project without the help of friends and family and a host of wonderful and competent contractors. The dream has become a reality.