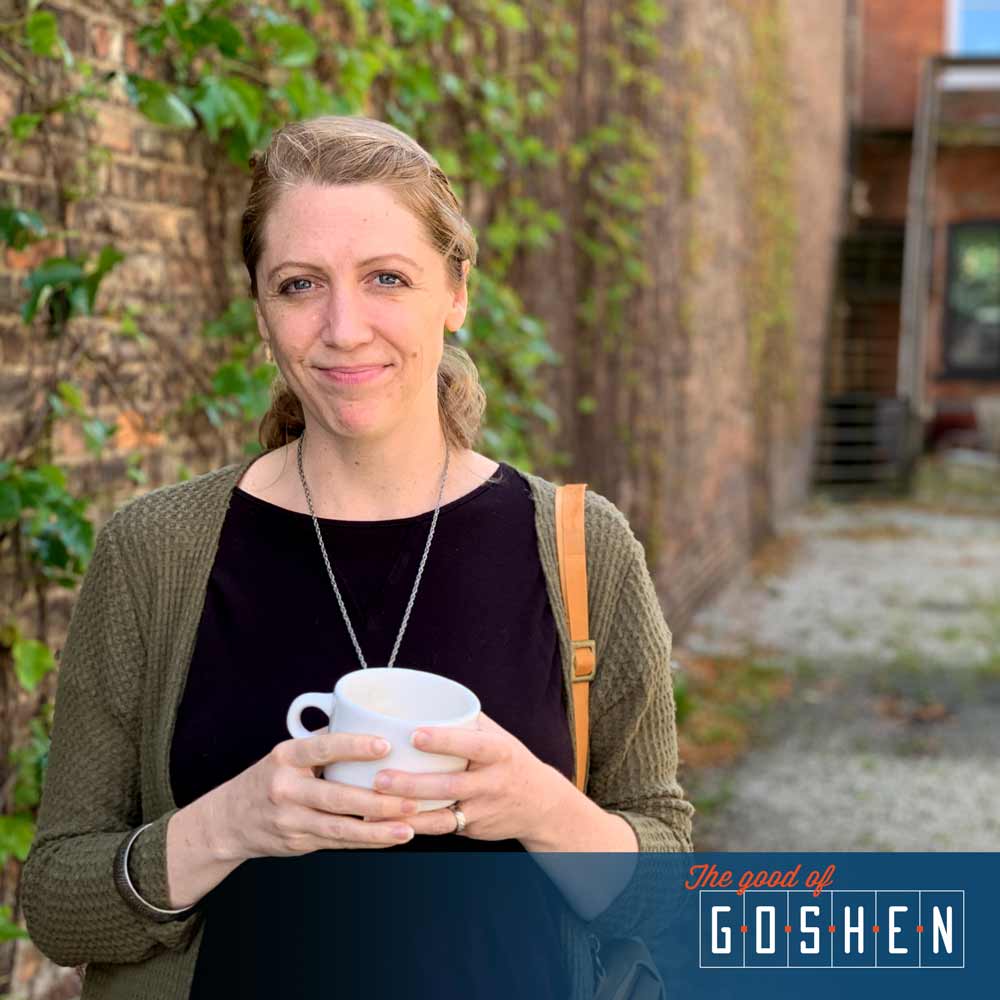 I was born in Bristol and raised in Elkhart. I moved to Goshen around 2001, 2002-ish. I love it here and I probably will be here for the rest of my life.

One of my primary sources of income and time spent is my Montessori school, Goshen Christian Montessori. We meet in First Presbyterian Church and we’ve been running since 2007. I also teach two dance classes through the Goshen Parks and Recreation Department. I’m a youth group leader for my church, Thrive Family Church. I also do wedding events at Bread & Chocolate through the summer. I’m also a Beautycounter consultant. It’s sort of like Mary Kay or Avon except it’s all ‘clean’ products – there’s a huge ‘never’ list or things that never go in the products. Those are my six jobs.

We have a lot of good friends who are also neighbors. We like just hanging out in Goshen – Goshen Brewing Company, The Electric Brew, biking. We do a lot of trail walking and walking in the neighborhood and stuff like that. I enjoy reading, so I’m really excited about the new Fables bookstore. I don’t know anybody who’s not excited about that! Oh, and also we have five cats that we rescued from our neighborhood.

In terms of places near to my heart, The Goshen Theater is one. When I started thinking about moving to Goshen, one of the reasons was Downtown@808, the church that was meeting there. As it was my church, it also was my dance studio. The upstairs ballroom was where we had all our dance classes for the past several years. That’s one place I feel really close to. I’ve been really loving all the things they’ve been doing with it, too, ever since The Goshen Theater committee took over, like all the River Bend Film Festival things and fun stuff like that. I probably spend most time at Goshen Brewing Co. as just a fun place to be in Goshen. It’s in the city but it’s also far enough removed that you feel like you’re in the country and just enjoying a nice afternoon.

Goshen is special/great because of its people, the lovely little small businesses downtown and throughout, the supportive arts atmosphere, the trails and paths through and around town, as well as the glorious historic homes and buildings. I have 30 friends within a four-block radius of my house and we’re constantly seeing each other through the week, just by proximity and because we all love supporting our local businesses. And that is just absolutely special.