Try It And See 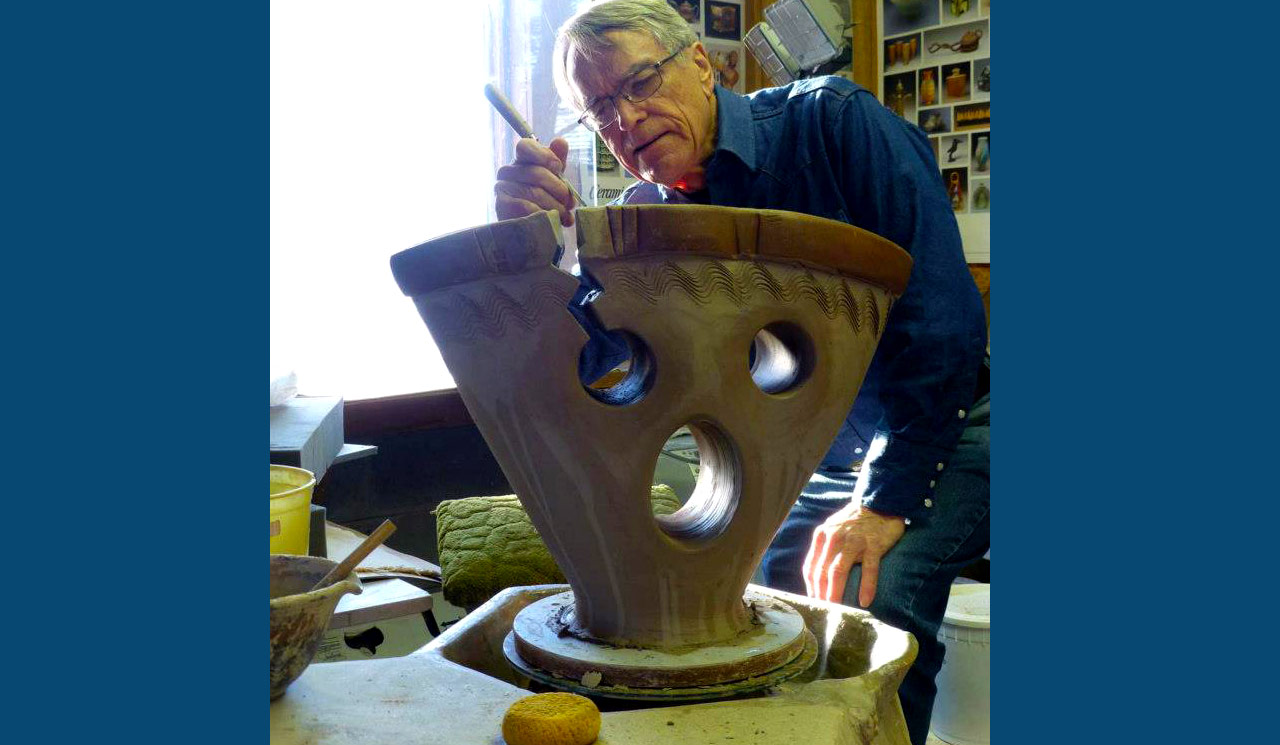 Marvin Bartel arrived at Goshen College in 1970 with an M.A. and Ph.D. in Arts Education, as well as a good number of years of experience teaching various mediums at both the high school and college level. In reminiscing about his experiences, Marvin speaks of a lifelong passion for teaching his students how to be creative:

“What they really need is the ability to think, and know how to ask questions, and how to come up with ideas, and how to persist, and how to hang in there when the going is tough.” Marvin’s approach to accomplishing this is multifaceted, and included a critiquing practice which helped his students learn to evolve ideas out of their own work (rather than imitating others), as well as a calculated structure of coursework which left students curious and eager to take more courses after the first semester.

As an active artist in multiple mediums throughout his life, including metals, painting, drawing, clay, and woodworking, Marvin also stresses the importance of creating his own artwork while teaching: “I’ve never thought I could be a good art teacher if I wasn’t an artist,” he says. The discoveries he made about creativity in his own life certainly led to the influential teaching methods that his students still remark about today. 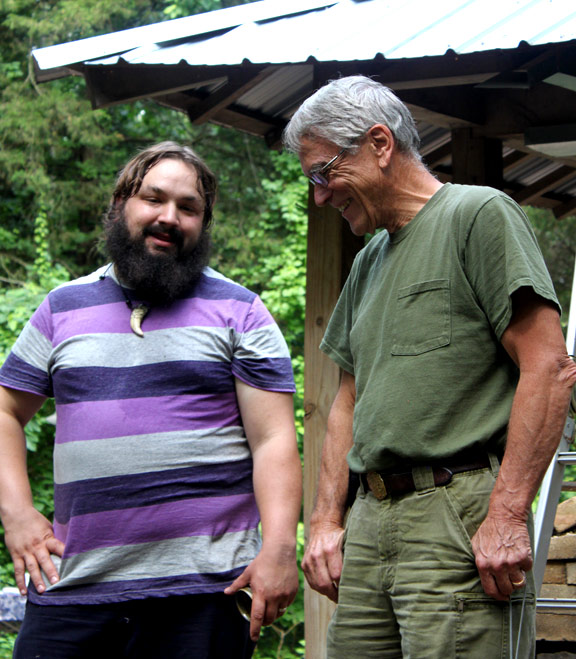 Marvin often states that an important part of teaching creativity was the method he employed for critiques: he would always ask students to make at least two or more items, which could then be compared. “Now that we’ve got two of them, we don’t have to say anything bad about anything,” he explains, touting a constructive, comparative approach.

Students will be successful, he believes, “if you can teach them how to develop ideas, and realize, mindfully realize that they’ve developed them themselves – the teacher may be there sort of egging it on,” he laughs, “and actually a lot of times, it’s very hard to find the good thing happening, and you have to really look for it to affirm it. But that’s my role, when I’m doing my job right. That’s what I’m trying to do as a teacher, is to look for the smallest little good thing that happened, so I can give some affirmation.” It seems that Marvin’s positive, encouraging approach was indeed fruitful; many of the current potters working in the Michiana region have been Marvin Bartel’s students, and they are not afraid to try new processes.

In reflecting upon their time as students, many of the Michiana potters have commented on the importance of Marvin’s “try it and see” philosophy. Dick Lehman explains that his desire and willingness to experiment with many aspects of the pottery process go back to his days as student: “There has always been a ‘what if’ component [in my work], and I would say that goes back to Marvin Bartel. Many students have said, and it was my experience too, that as beginning students we’d go to Marvin and say, ‘What do you think would happen if we tried this?’ And he would say, ‘Try it and see.’ I know now, from this perspective, that he was learning from us, and that we did things that he already knew wouldn’t work. Because he had been around, [he knew] there are certain things you just don’t do, you don’t put this much flux in a glaze, you don’t put that much colorant. Well, we didn’t know any better and we did [those kinds of things], and some of those things were marvelous. So we learned, he learned, and the most important learning was that it’s okay to try something new.” After 30 years as a potter, Dick’s work is still consistently evolving as he experiments with new ideas for forms, textures, and glazes.

Art tours like the Michiana Pottery Tour (see details below)
let visitors get an inside look at artists’ studios.

Marvin also shares a story which clearly illustrates his support for experimentation amongst his students. Describing Jeff Unzicker’s early days as a student in ceramics at Goshen College, Marvin says, “I came down [to the studio] one day and he was sitting at the wheel and he had this… he had decided to try [making a pot] where you throw and coil them, in order to make it bigger. And he had it about, I don’t know, three feet tall or something. I said, ‘Jeff, this is great! Have you measured the kiln?’” Marvin laughs heartily, recounting this moment. He continues, “Jeff said, ‘Oh, I don’t care if I can fire it, I don’t care, I just wanted to see if I can make it.’ I said, ‘Oh, that’s great, just do it, see how big you can make it.’ So he made this really tall thing, you know, and that thing was sitting around there for weeks. And then one day he came and said, ‘What if I would dig this real deep hole out here in the yard, would there be a way I could fire this tall pot in there?’ And… there are different ways you could answer that question. I said, ‘As far as I know, it’s never been done, but I’d sure like to see you try.’ And so he went right to it.” Eventually, with Marvin and Jeff working together, the pot was successfully fired in an experimental kiln consisting of a gas burner, a large hole in the ground, some fire bricks, and the lid of an electric kiln. Today, Jeff Unzicker is still making monumental pots, although these days, he typically fires in more conventional kilns; Jeff is well known for the quantities of impressive two to three foot tall wood fired pots which he sells in venues around the Midwest. 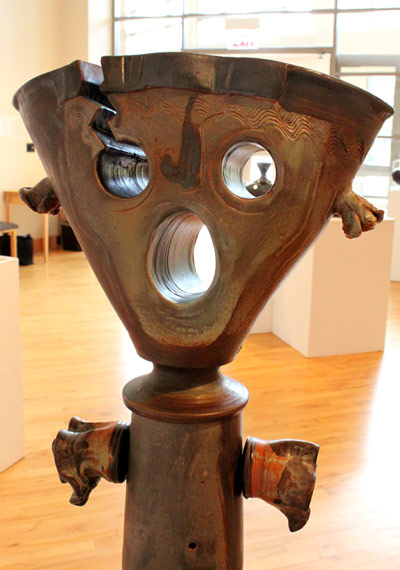 An example of Marvin’s work on display at the Hershberger Art Gallery, Goshen College

Marvin Bartel also attributes much of his success as a teacher to the structure of the coursework he offered at Goshen College: “My reasoning is, you can learn to make a pinch pot in a day. If you’re going to learn to throw, it takes years. So you have to start throwing right away, because it takes the longest to learn. I could work all the hand building in along the way, and they could learn everything. By the end of the first semester, [my students] knew so much of what they didn’t know yet, they had to take another semester! It really grew the department.” He continues, “[Students] don’t even know they want to throw, except once the word gets out. Then they come and watch their friends, and ‘Oh, wow, can I try this?’ [I would respond], ‘Well, take the class.’ So that’s the way, if you’re a teacher, you’ll make yourself indispensable really quickly.” Marvin also explained the results of this enticing learning, even after students had finished their coursework: upon inquiring about what they have been doing, they often respond: “‘Well, I’ve been making pots.’ Because they know how to learn – so why should they stop? They don’t need me anymore. That’s what makes me feel the best.”

Indeed, over half of the participants in the Michiana Pottery Tour have been Marvin’s students, an impressive tribute to his influence in the area’s pottery community.

Taken as an excerpt from writing of Meredith McGriff. McGriff is a PhD student in the department of Folklore and Ethnomusicology at Indiana University Bloomington. This excerpt about Marvin Bartel is taken from her research, titled: Aesthetics and Philosophy in the Development of the Michiana Pottery Tradition.

Among Marvin’s many students you might recognize some people; Dick Lehman, Fred Driver, Bob Smoker, Eric Kaufmann, and Justin Rothshank – see their work and the depth of the ceramic talent in the area Marvin helped inspire.

This event will feature a range of ceramic work by a diverse and talented group of clay artists. You will find a variety of functional and decorative ceramics available for purchase, including wood-fired ceramics, crystalline porcelain work, functional earthenware, gas-fired stoneware, handmade pottery tools and more. You will also see working studios, a wood kiln unloading, pottery making demonstrations, live music, and have the chance to talk with the artists.

The website for the event introduces all the participants, offers a self guided map of the tour, and all the details.

Information and images can also be found on our Facebook page. 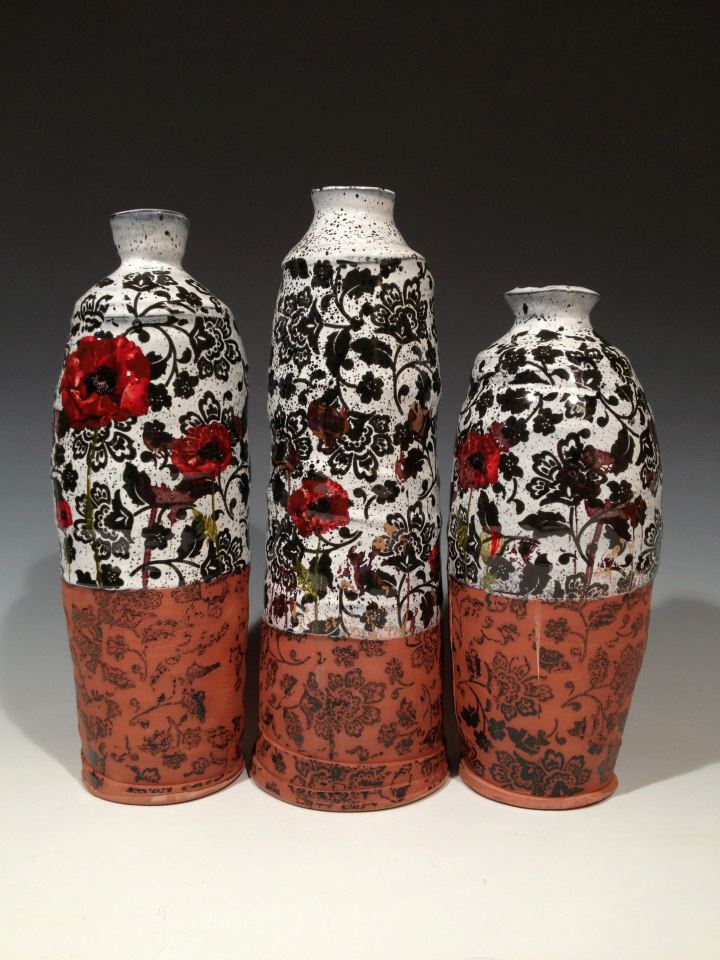